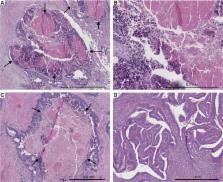 The disease outcome in colorectal cancer (CRC) can vary in a wide range within the same tumour stage. The aim of this study was to clarify the prognostic value and the determinants of tumour necrosis in CRC.

The areal proportion (%) of tumour tissue showing coagulative necrosis was evaluated in a cohort of 147 CRC patients and correlated with basic clinicopathological characteristics, microvascular density (MVD), cell proliferation rate, KRAS and BRAF mutations, and survival. To validate the prognostic significance of tumour necrosis, an independent cohort of 418 CRC patients was analysed.

Tumour necrosis positively correlated with tumour stage ( P=8.5E−4)—especially with T class (4.0E−6)—and inversely correlated with serrated histology ( P=0.014), but did not significantly associate with cell proliferation rate, MVD, and KRAS or BRAF mutation. Abundant (10% or more) tumour necrosis associated with worse disease-free survival independent of stage and other biological or clinicopathological characteristics in both cohorts, and the adverse effect was directly related to its extent. High CD105 MVD was also a stage independent marker for worse disease-free survival.

Tumour necrosis percentage is a relevant histomorphological prognostic indicator in CRC. More studies are needed to disclose the mechanisms of tumour necrosis.

L M McShane,  D Altman,  W Sauerbrei … (2005)
Despite years of research and hundreds of reports on tumour markers in oncology, the number of markers that have emerged as clinically useful is pitifully small. Often initially reported studies of a marker show great promise, but subsequent studies on the same or related markers yield inconsistent conclusions or stand in direct contradiction to the promising results. It is imperative that we attempt to understand the reasons that multiple studies of the same marker lead to differing conclusions. A variety of methodological problems have been cited to explain these discrepancies. Unfortunately, many tumour marker studies have not been reported in a rigorous fashion, and published articles often lack sufficient information to allow adequate assessment of the quality of the study or the generalisability of the study results. The development of guidelines for the reporting of tumour marker studies was a major recommendation of the US National Cancer Institute and the European Organisation for Research and Treatment of Cancer (NCI-EORTC) First International Meeting on Cancer Diagnostics in 2000. Similar to the successful CONSORT initiative for randomised trials and the STARD statement for diagnostic studies, we suggest guidelines to provide relevant information about the study design, preplanned hypotheses, patient and specimen characteristics, assay methods, and statistical analysis methods. In addition, the guidelines suggest helpful presentations of data and important elements to include in discussions. The goal of these guidelines is to encourage transparent and complete reporting so that the relevant information will be available to others to help them to judge the usefulness of the data and understand the context in which the conclusions apply.

Ki-67: level of evidence and methodological considerations for its role in the clinical management of breast cancer: analytical and critical review

Elisabeth Luporsi,  Fabrice André,  Frederique Spyratos … (2011)
Clinicians can use biomarkers to guide therapeutic decisions in estrogen receptor positive (ER+) breast cancer. One such biomarker is cellular proliferation as evaluated by Ki-67. This biomarker has been extensively studied and is easily assayed by histopathologists but it is not currently accepted as a standard. This review focuses on its prognostic and predictive value, and on methodological considerations for its measurement and the cut-points used for treatment decision. Data describing study design, patients’ characteristics, methods used and results were extracted from papers published between January 1990 and July 2010. In addition, the studies were assessed using the REMARK tool. Ki-67 is an independent prognostic factor for disease-free survival (HR 1.05–1.72) in multivariate analyses studies using samples from randomized clinical trials with secondary central analysis of the biomarker. The level of evidence (LOE) was judged to be I-B with the recently revised definition of Simon. However, standardization of the techniques and scoring methods are needed for the integration of this biomarker in everyday practice. Ki-67 was not found to be predictive for long-term follow-up after chemotherapy. Nevertheless, high KI-67 was found to be associated with immediate pathological complete response in the neoadjuvant setting, with an LOE of II-B. The REMARK score improved over time (with a range of 6–13/20 vs. 10–18/20, before and after 2005, respectively). KI-67 could be considered as a prognostic biomarker for therapeutic decision. It is assessed with a simple assay that could be standardized. However, international guidelines are needed for routine clinical use.

From twelve months after its original publication, this work is licensed under the Creative Commons Attribution-NonCommercial-Share Alike 4.0 Unported License. To view a copy of this license, visit http://creativecommons.org/licenses/by-nc-sa/4.0/