Inflammatory Fibroid Polyp: An Unusual Cause of Abdominal Pain in the Upper Gastrointestinal Tract a Case Report 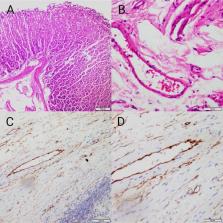 Inflammatory fibroid polyps (IFPs) tend to occur in the gastrointestinal tract, and they are rare and benign neoplasms. In general, IFPs often come from epithelial tissue. The gastric antrum is the most common location. Endoscopic ultrasound (EUS) often shows a predominantly hypoechoic mass with well-defined borders originating from the submucosal area. Here, we report the case of a 46-year-old woman with abdominal pain who underwent computed tomography (CT), endoscopic ultrasound and endoscopic submucosal dissection (ESD) of resected specimens; the diagnosis was ultimately an inflammatory fibroid polyp. She is currently in clinical remission.

Aatur Singhi,  Chu-En Lin,  Ta-Chiang Liu … (2013)
Inflammatory fibroid polyps (IFPs) are rare, benign tumors that can arise throughout the gastrointestinal tract. Although the molecular pathogenesis of these lesions has been well characterized, their morphologic features often vary. We report the clinicopathologic findings of the largest series of IFPs to date. A total of 83 IFPs seen at our institution were collected between 1999 and 2012. The specimens included 64 biopsies and 19 resections. A review of the clinical features identified a modest female predominance (47 women and 36 men) with patients ranging in age from 26 to 87 years (mean, 60 y). Involved sites included the esophagus (n=2), stomach (n=31; mainly antrum), small intestines (n=17), appendix (n=1), large intestines (n=31; majority within the rectosigmoid), and anal canal (n=1). Although most patients had a nonspecific presentation, those with small intestinal lesions frequently presented with intussusception. Grossly, the tumors ranged in size from 0.2 to 4.2 cm (mean, 1.7 cm). Histologically, IFPs were centered within the submucosa in all resection specimens, but mucosal extension was found in 74 of 83 (89%) cases. The tumors varied in both cellularity and degree of vascularity. However, the characteristic feature of perivascular onion skinning was present in only 54% (45/83) of the cases. In addition, a short fascicular growth pattern was also noted in 36% (30 of 83) of cases, whereas both features were present in 14 cases (17%). Eosinophils were present in 94% (78 of 83) of cases but varied widely in number from abundant (20/hpf) to sparse (1/hpf). Interestingly, in those cases with sparse eosinophils, prominent hyalinization was also present (11 of 78, 13%). In addition, although the majority of IFPs expressed CD34, 6 of 44 (14%) were negative. No associated dysplasia or malignancy was seen. IFPs represent a diverse set of submucosal-based lesions that commonly extend into the mucosa, making them amenable to endoscopic biopsy. Although their classic histologic features of perivascular onion skinning and predominance of eosinophils are well described, they may alternatively present with a short fascicular growth pattern, a sparse number of eosinophils, and prominent hyalinization.

E Binot,  E Wardelmann,  S Merkelbach-Bruse … (2008)
Inflammatory fibroid polyps (IFPs) are mesenchymal tumours which arise in the submucosa and mucosa of the gastrointestinal tract. To date, the pathogenesis is unknown and IFPs are considered reactive and non-neoplastic lesions. Investigating a series of 23 IFPs, we made the observation that the tumours consistently express PDGFRA. To further elucidate the pathogenetic role of PDGFRA, we performed mutational analyses of exons 10, 12, 14, and 18. As IFPs are characterized by an inflammatory infiltrate rich in eosinophils, we used fluorescence in situ hybridization in a subset of tumours to investigate a possible FIP1L1-PDGFRA translocation which is known as the cause of hypereosinophilic syndrome (HES). Sixteen IFPs (70%) harboured activating mutations in exons 12 and 18, respectively: V561D (n = 1), R560SDelta561-567 (n = 1), Delta559-561D591H (n = 1), S566RDelta567-571 (n = 3), D842V (n = 7), D842I (n = 1), Delta842-845 (n = 1), and Delta845-848 (n = 1). These mutations equal pathogenic mutations detected in gastrointestinal stromal tumours previously. Activating mutations in exons 10 and 14 were not noted. None of the cases revealed the FIP1L1-PDGFRA translocation. Considering the remarkable number of activating mutations detected in our series, we conclude that the vast majority of IFPs harbour gain-of-function mutations in the PDGFRA gene. The presence of PDGFRA mutations questions the reactive nature of IFPs and raises the possibility of a neoplastic process.

Leslie Sobin,  Jerzy Lasota,  Markku Miettinen … (2009)
The inflammatory fibroid polyp is a rare benign lesion occurring throughout the digestive tract. It usually forms a solitary mass, characterized by a proliferation of fibrovascular tissue infiltrated by a variable number of inflammatory cells. The etiology of this lesion is unknown and conflicting histogenetic theories have been proposed. Recently, mutations in platelet-derived growth factor receptor (PDGFRA) and PDGFRA expression were reported in gastric inflammatory fibroid polyps. In this study, PDGFRA exons 12, 14, and 18 were screened for activating mutations in 60 small intestinal inflammatory fibroid polyps. In addition, the PDGFRA expression was evaluated immunohistochemically. Mutations in PDGFRA were identified in 33 of 60 (55%) cases, whereas 95% expressed PDGFRA. There were 26 deletions, three deletion-insertions, duplication, and single nucleotide substitution in exon 12, and a single nucleotide substitution and deletion in exon 18. The majority (n=23) of exon 12 deletions were 1837_1851del leading to S566_E571delinsR. However, 1835_1852delinsCGC leading to the same S566_E571delinsR, were found in two tumors. Three inflammatory fibroid polyps had 1836_1850del leading to S566_E571delinsK. A complex deletion-insertion affecting a similar region (1837_1856delinsGATTGATGATC) and leading to S566_I573delinsRIDDL was identified once. In addition, duplication and single nucleotide substitution were found 5' to the common inflammatory fibroid polyp mutational 'hot spot'. These mutations consist of 1808_1828dup leading to I557_E563dup, and 1821T>A resulting in 561V>D substitution. A 2664A>T and 2663_2674del leading to 842D>V and D842_H845del, respectively, were identified in exon 18. Similar gain-of-function PDGFRA mutations reported in gastrointestinal stromal tumors have been considered to be a driving pathogenetic force. This study showed consistent expression and common mutational activation of PDGFRA in small intestinal inflammatory fibroid polyps as in their gastric counterparts, and these lesions should be considered PDGFRA-driven benign neoplasms. We also suggest that these polyps may develop from earlier described PDGFRA-positive mesenchymal cells distributed along the villus membrane after oncogenic PDGFRA activation.

This work is licensed under the Creative Commons Attribution 4.0 Public License.