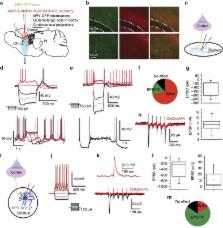 Recent discoveries of striatal GABAergic interneurons require a new conceptualization of the organization of intrastriatal circuitry and their cortical and thalamic inputs. We investigated thalamic inputs to the two populations of striatal neuropeptide Y (NPY) interneurons, plateau low threshold spike (PLTS) and NPY-neurogliaform (NGF) cells. Optogenetic activation of parafascicular inputs evokes suprathreshold monosynaptic glutamatergic excitation in NGF interneurons and a disynaptic, nicotinic excitation through cholinergic interneurons. In contrast, the predominant response of PLTS interneurons is a disynaptic inhibition dependent on thalamic activation of striatal tyrosine hydroxylase interneurons (THINs). In contrast, THINs do not innervate NGF or fast spiking interneurons, showing significant specificity in THINs outputs. Chemospecific ablation of THINs impairs prepulse inhibition of the acoustic startle response suggesting an important behavioural role of this disynaptic pathway. Our findings demonstrate that the impact of the parafascicular nucleus on striatal activity and some related behaviour critically depend on synaptic interactions within interneuronal circuits.

The responses of striatal GABAergic interneurons to thalamic inputs are not well characterised. Here, the authors demonstrate that complex intrastriatal circuitry is responsible for thalamic-evoked monosynaptic and disynaptic excitation in NPY-NGF interneurons but a disynaptic inhibition in the NPY-PLTS.

Beverly Tepper,  T Koós (1999)
The basal ganglia are a highly interconnected network of nuclei essential for the modulation and execution of voluntary behavior. The neostriatum is the principal input and one of the principal controllers of the output of the basal ganglia. Neostriatal projection neurons seem to be dynamically and powerfully controlled by GABAergic inputs, but the source(s) and physiological properties of these inputs remain unclear. Here we use paired whole-cell recordings to show that this inhibition derives from small populations of GABAergic interneurons that are themselves interconnected through functional electrotonic synapses. Inhibitory synaptic potentials generated from single interneurons are sufficiently powerful to delay or entirely block the generation of action potentials in a large number of projection neurons simultaneously.

B Ding,  D. James Surmeier,  Roberto Guzman … (2010)
Salient stimuli redirect attention and suppress ongoing motor activity. This attentional shift is thought to rely upon thalamic signals to the striatum to shift cortically driven action selection, but the network mechanisms underlying this interaction are unclear. Using a brain slice preparation that preserved cortico- and thalamostriatal connectivity, it was found that activation of thalamostriatal axons in a way that mimicked the response to salient stimuli induced a burst of spikes in striatal cholinergic interneurons that was followed by a pause lasting more than half a second. This patterned interneuron activity triggered a transient, presynaptic suppression of cortical input to both major classes of principal medium spiny neuron (MSN) that gave way to a prolonged enhancement of postsynaptic responsiveness in striatopallidal MSNs controlling motor suppression. This differential regulation of the corticostriatal circuitry provides a neural substrate for attentional shifts and cessation of ongoing motor activity with the appearance of salient environmental stimuli.

James Tepper,  Fatuel Tecuapetla,  Tibor Koos … (2010)
The canonical view of striatal GABAergic interneurons has evolved over several decades of neuroanatomical/neurochemical and electrophysiological studies. From the anatomical studies, three distinct GABAergic interneuronal subtypes are generally recognized. The best-studied subtype expresses the calcium-binding protein, parvalbumin. The second best known interneuron type expresses a number of neuropeptides and enzymes, including neuropeptide Y, somatostatin, and nitric oxide synthase. The last GABAergic interneuron subtype expresses the calcium binding protein, calretinin. There is no overlap or co-localization of these three different sets of markers. The parvalbumin-immunoreactive GABAergic interneurons have been recorded in vitro and shown to exhibit a fast-spiking phenotype characterized by short duration action potentials with large and rapid spike AHPs. They often fire in a stuttering pattern of high frequency firing interrupted by periods of silence. They are capable of sustained firing rates of over 200 Hz. The NPY/SOM/NOS interneurons have been identified as PLTS cells, exhibiting very high input resistances, low threshold spike and prolonged plateau potentials in response to intracellular depolarization or excitatory synaptic stimulation. Thus far, no recordings from identified CR interneurons have been obtained. Recent advances in technological approaches, most notably the generation of several BAC transgenic mouse strains which express a fluorescent marker, enhanced green fluorescent protein, specifically and selectively only in neurons of a certain genetic makeup (e.g., parvalbumin-, neuropeptide Y-, or tyrosine hydroxylase-expressing neurons etc.) have led to the ability of electrophysiologists to visualize and patch specific neuron types in brain slices with epifluorescence illumination. This has led to a rapid expansion of the number of neurochemically and/or electrophysiologically identified interneuronal cell types in the striatum and elsewhere. This article will review the anatomy, neurochemistry, electrophysiology, synaptic connections, and function of the three “classic” striatal GABAergic interneurons as well as more recent data derived from in vitro recordings from BAC transgenic mice as well as recent in vivo data.

Open Access This article is licensed under a Creative Commons Attribution 4.0 International License, which permits use, sharing, adaptation, distribution and reproduction in any medium or format, as long as you give appropriate credit to the original author(s) and the source, provide a link to the Creative Commons license, and indicate if changes were made. The images or other third party material in this article are included in the article's Creative Commons license, unless indicated otherwise in a credit line to the material. If material is not included in the article's Creative Commons license and your intended use is not permitted by statutory regulation or exceeds the permitted use, you will need to obtain permission directly from the copyright holder. To view a copy of this license, visit http://creativecommons.org/licenses/by/4.0/