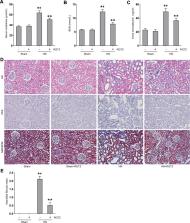 Hyperuricemia is an independent risk factor for renal damage and can promote the progression of chronic kidney disease (CKD). In the present study, we employ a rat model to investigate the effects of rosiglitazone (RGTZ), a peroxisome proliferator-activated receptor-gamma agonist, on the development of hyperuricemic nephropathy (HN), and we elucidate the mechanisms involved.

An HN rat model was established by oral administration of a mixture of adenine and potassium oxonate daily for 3 weeks. Twenty-four rats were divided into 4 groups: sham treatment, sham treatment plus RGTZ, HN, and HN treated with RGTZ.

Diverse Roles of TGF-β/Smads in Renal Fibrosis and Inflammation

Hui-Yao Lan (2011)
TGF-β1 has been long considered as a key mediator in renal fibrosis and induces renal scarring largely by activating its downstream Smad signaling pathway. Interestingly, while mice overexpressing active TGF-β1 develop progressive renal injury, latent TGF-β1 plays a protective role in renal fibrosis and inflammation. Under disease conditions, Smad2 and Smad3 are highly activated, while Smad7 is degraded through the ubiquitin proteasome degradation mechanism. In addition to TGF-β1, many pathogenic mediators such as angiotensin II and advanced glycation end products can also activate the Smad pathway via both TGF-β-dependent and independent mechanisms. Smads interact with other signaling pathways, such as the MAPK and NF-κB pathways, to positively or negatively regulate renal inflammation and fibrosis. Studies from gene knockout mice demonstrate that TGF-β1 acts by stimulating its downstream Smads to diversely regulate kidney injury. In the context of renal fibrosis and inflammation, Smad3 is pathogenic, while Smad2 and Smad7 are protective. Smad4 exerts its diverse roles by transcriptionally enhancing Smad3-mediated renal fibrosis while inhibiting NF-κB-driven renal inflammation via a Smad7-dependent mechanism. Furthermore, we also demonstrated that TGF-β1 acts by stimulating Smad3 to positively or negatively regulate microRNAs to exert its fibrotic role in kidney disease. In conclusion, TGF-β/Smad signaling is a major pathway leading to kidney disease. Smad3 is a key mediator in renal fibrosis and inflammation, whereas Smad2 and Smad7 are renoprotective. Smad4 exerts its diverse role in promoting renal fibrosis while inhibiting inflammation. Thus, targeting the downstream TGF-β/Smad3 signaling pathway by gene transfer of either Smad7 or Smad3-dependent microRNAs may represent a specific and effective therapeutic strategy for kidney disease.

J. Nikolic,  Ming Meng,  Hui-Yao Lan (2014)
Many types of kidney injury induce inflammation as a protective response. However, unresolved inflammation promotes progressive renal fibrosis, which can culminate in end-stage renal disease. Kidney inflammation involves cells of the immune system as well as activation of intrinsic renal cells, with the consequent production and release of profibrotic cytokines and growth factors that drive the fibrotic process. In glomerular diseases, the development of glomerular inflammation precedes interstitial fibrosis; although the mechanisms linking these events are poorly understood, an important role for tubular epithelial cells in mediating this link is gaining support. Data have implicated macrophages in promoting both glomerular and interstitial fibrosis, whereas limited evidence suggests that CD4(+) T cells and mast cells are involved in interstitial fibrosis. However, macrophages can also promote renal repair when the cause of renal injury can be resolved, highlighting their plasticity. Understanding the mechanisms by which inflammation drives renal fibrosis is necessary to facilitate the development of therapeutics to halt the progression of chronic kidney disease.

Xiao-ming Meng,  Patrick Ming-Kuen Tang,  Jun-Jun Li … (2015)
TGF-β (transforming growth factor-β) is well identified as a central mediator in renal fibrosis. TGF-β initiates canonical and non-canonical pathways to exert multiple biological effects. Among them, Smad signaling is recognized as a major pathway of TGF-β signaling in progressive renal fibrosis. During fibrogenesis, Smad3 is highly activated, which is associated with the down-regulation of an inhibitory Smad7 via an ubiquitin E3-ligases-dependent degradation mechanism. The equilibrium shift between Smad3 and Smad7 leads to accumulation and activation of myofibroblasts, overproduction of ECM (extracellular matrix), and reduction in ECM degradation in the diseased kidney. Therefore, overexpression of Smad7 has been shown to be a therapeutic agent for renal fibrosis in various models of kidney diseases. In contrast, another downstream effecter of TGF-β/Smad signaling pathway, Smad2, exerts its renal protective role by counter-regulating the Smad3. Furthermore, recent studies demonstrated that Smad3 mediates renal fibrosis by down-regulating miR-29 and miR-200 but up-regulating miR-21 and miR-192. Thus, overexpression of miR-29 and miR-200 or down-regulation of miR-21 and miR-192 is capable of attenuating Smad3-mediated renal fibrosis in various mouse models of chronic kidney diseases (CKD). Taken together, TGF-β/Smad signaling plays an important role in renal fibrosis. Targeting TGF-β/Smad3 signaling may represent a specific and effective therapy for CKD associated with renal fibrosis.