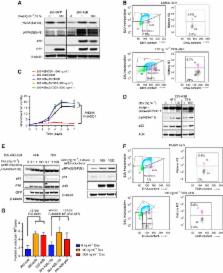 Although loss of p53 might allow tumour cells to tolerate elevated APOBEC3B expression, continued expression of this enzyme might impart a number of therapeutic vulnerabilities upon tumour cells.

Esmeralda N Blaney Davidson,  Y Ottaviano,  Guy Poirier … (1993)
Apoptosis is a morphologically and biochemically distinct form of cell death that occurs under a variety of physiological and pathological conditions. In the present study, the proteolytic cleavage of poly(ADP-ribose) polymerase (pADPRp) during the course of chemotherapy-induced apoptosis was examined. Treatment of HL-60 human leukemia cells with the topoisomerase II-directed anticancer agent etoposide resulted in morphological changes characteristic of apoptosis. Endonucleolytic degradation of DNA to generate nucleosomal fragments occurred simultaneously. Western blotting with epitope-specific monoclonal and polyclonal antibodies revealed that these characteristic apoptotic changes were accompanied by early, quantitative cleavage of the M(r) 116,000 pADPRp polypeptide to an M(r) approximately 25,000 fragment containing the amino-terminal DNA-binding domain of pADPRp and an M(r) approximately 85,000 fragment containing the automodification and catalytic domains. Activity blotting revealed that the M(r) approximately 85,000 fragment retained basal pADPRp activity but was not activated by exogenous nicked DNA. Similar cleavage of pADPRp was observed after exposure of HL-60 cells to a variety of chemotherapeutic agents including cis-diaminedichloroplatinum(II), colcemid, 1-beta-D-arabinofuranosylcytosine, and methotrexate; to gamma-irradiation; or to the protein synthesis inhibitors puromycin or cycloheximide. Similar changes were observed in MDA-MB-468 human breast cancer cells treated with trifluorothymidine or 5-fluoro-2'-deoxyuridine and in gamma-irradiated or glucocorticoid-treated rat thymocytes undergoing apoptosis. Treatment with several compounds (tosyl-L-lysine chloromethyl ketone, tosyl-L-phenylalanine chloromethyl ketone, N-ethylmaleimide, iodoacetamide) prevented both the proteolytic cleavage of pADPRp and the internucleosomal fragmentation of DNA. The results suggest that proteolytic cleavage of pADPRp, in addition to being an early marker of chemotherapy-induced apoptosis, might reflect more widespread proteolysis that is a critical biochemical event early during the process of physiological cell death.

An anthropoid-specific locus of orphan C to U RNA-editing enzymes on chromosome 22.

Ian Dunham,  Jane Gisbourne,  Kerry Chester … (2002)
The cytidine (C) to uridine (U) editing of apolipoprotein (apo) B mRNA is mediated by tissue-specific, RNA-binding cytidine deaminase APOBEC1. APOBEC1 is structurally homologous to Escherichia coli cytidine deaminase (ECCDA), but has evolved specific features required for RNA substrate binding and editing. A signature sequence for APOBEC1 has been used to identify other members of this family. One of these genes, designated APOBEC2, is found on chromosome 6. Another gene corresponds to the activation-induced deaminase (AID) gene, which is located adjacent to APOBEC1 on chromosome 12. Seven additional genes, or pseudogenes (designated APOBEC3A to 3G), are arrayed in tandem on chromosome 22. Not present in rodents, this locus is apparently an anthropoid-specific expansion of the APOBEC family. The conclusion that these new genes encode orphan C to U RNA-editing enzymes of the APOBEC family comes from similarity in amino acid sequence with APOBEC1, conserved intron/exon organization, tissue-specific expression, homodimerization, and zinc and RNA binding similar to APOBEC1. Tissue-specific expression of these genes in a variety of cell lines, along with other evidence, suggests a role for these enzymes in growth or cell cycle control.

S Janz,  Mark T. Liddament (2004)
A powerful mechanism of vertebrate innate immunity has been discovered in the past year, in which APOBEC proteins inhibit retroviruses by deaminating cytosine residues in nascent retroviral cDNA. To thwart this cellular defence, HIV encodes Vif, a small protein that mediates APOBEC degradation. Therefore, the balance between APOBECs and Vif might be a crucial determinant of the outcome of retroviral infection. Vertebrates have up to 11 different APOBEC proteins, with primates having the most. APOBEC proteins include AID, a probable DNA mutator that is responsible for immunoglobulin-gene diversification, and APOBEC1, an RNA editor with antiretroviral activities. This APOBEC abundance might help to tip the balance in favour of cellular defences.

This work is licensed under the Creative Commons Attribution-Non-Commercial-Share Alike 4.0 International License. To view a copy of this license, visit http://creativecommons.org/licenses/by-nc-sa/4.0/