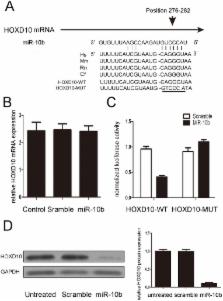 Roger Briesewitz,  Susanne Schnittger,  Giovanna Meloni … (2008)
Acute myeloid leukemia (AML) carrying NPM1 mutations and cytoplasmic nucleophosmin (NPMc+ AML) accounts for about one-third of adult AML and shows distinct features, including a unique gene expression profile. MicroRNAs (miRNAs) are small noncoding RNAs of 19-25 nucleotides in length that have been linked to the development of cancer. Here, we investigated the role of miRNAs in the biology of NPMc+ AML. The miRNA expression was evaluated in 85 adult de novo AML patients characterized for subcellular localization/mutation status of NPM1 and FLT3 mutations using a custom microarray platform. Data were analyzed by using univariate t test within BRB tools. We identified a strong miRNA signature that distinguishes NPMc+ mutated (n = 55) from the cytoplasmic-negative (NPM1 unmutated) cases (n = 30) and includes the up-regulation of miR-10a, miR-10b, several let-7 and miR-29 family members. Many of the down-regulated miRNAs including miR-204 and miR-128a are predicted to target several HOX genes. Indeed, we confirmed that miR-204 targets HOXA10 and MEIS1, suggesting that the HOX up-regulation observed in NPMc+ AML may be due in part by loss of HOX regulators-miRNAs. FLT3-ITD+ samples were characterized by up-regulation of miR-155. Further experiments demonstrated that the up-regulation of miR-155 was independent from FLT3 signaling. Our results identify a unique miRNA signature associated with NPMc+ AML and provide evidence that support a role for miRNAs in the regulation of HOX genes in this leukemia subtype. Moreover, we found that miR-155 was strongly but independently associated with FLT3-ITD mutations.

MicroRNA-10b is overexpressed in malignant glioma and associated with tumor invasive factors, uPAR and RhoC.

Kohkichi Hosoda,  Masamitsu Nishihara,  Eiji Kohmura … (2009)
MicroRNAs (miRNAs) are effective post-transcriptional regulators of gene expression and are important in many biological processes. Although the oncogenic and tumor suppressive functions of several miRNAs have been characterized, the role of miRNAs in mediating tumor invasion and migration remains largely unexplored. Recently, miR-10b was identified as an miRNA highly expressed in metastatic breast cancer, promoting cell migration and invasion. Here, we performed real-time reverse transcriptase polymerase chain reaction (RT-PCR) assays on 43 glioma samples (17 glioblastoma, 6 anaplastic astrocytoma, 10 low-grade astrocytoma, 6 oligodendroglioma and 4 ependymoma) and 6 glioma cell lines. We found that miR-10b expression was upregulated in all glioma samples compared to non-neoplastic brain tissues. The expression levels of miR-10b were associated with higher grade glioma. In addition, mRNA expressions of RhoC and urokinase-type plasminogen activator receptor (uPAR), which were thought to be regulated by miR-10b via HOXD10, were statistically significantly correlated with the expression of miR-10b (p < 0.001, p = 0.001, respectively). Also, protein expression levels of RhoC and uPAR were associated with expression levels of miR-10b (p = 0.009, p = 0.014, respectively). Finally, multifocal lesions on enhanced MRI of 7 malignant gliomas were associated with higher expression levels of miR-10b (p = 0.02). Our data indicated that miR-10b might play some role in the invasion of glioma cells. 2009 UICC

This work was supported by National Natural Science Foundation of P.R. China (Grant Number: 81272053,81330044, and 81301596). The funders had no role in study design, data collection and analysis, decision to publish, or preparation of the manuscript.