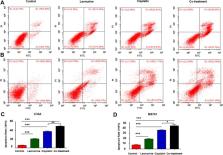 Leonurine had time- and dose-dependent anti-proliferative effects on C33A and MS751 cells. Leonurine and cisplatin combination was more efficacious in inhibiting the growth of cervical cancer cells than either of the two drugs. The combined application has shown that the cervical cancer cells were arrested at G1 phase after treatments. Moreover, flow cytometry analysis indicated that the combined treatment could cause more cell apoptosis than the single drug treatment. Consistently, combined treatment elevated BAX/BCL-2 ratio, and the expression of BAX, PARP and cleaved caspase-3 proteins. Mechanistic investigations uncovered that the tumor-inhibiting effects of the co-treatment were mediated by repressing MDR, including MRP1 and P-Gp protein, thereby enhancing the efficiency of cisplatin.

Leonurine and cisplatin have synergistic antitumorigenic effects on cervical cancer. Combination with leonurine may serve as a novel strategy for enhancing cisplatin sensitivity via the inhibition of the expression of MRP1 and P-Gp.

Roberto Pariente,  José Pariente,  Ana B. Rodríguez … (2016)
Melatonin has antitumor activity via several mechanisms including its antiproliferative and pro-apoptotic effects as well as its potent antioxidant actions, although recent evidence has indicated that melatonin may perform pro-oxidant actions in tumor cells. Therefore, melatonin may be useful in the treatment of tumors in association with chemotherapy drugs. This study was intended to evaluate the in vitro effect of melatonin on the cytotoxic and pro-apoptotic actions of various chemotherapeutic agents in cervical cancer HeLa cells. Herein, we found that both melatonin and three of the chemotherapeutic drugs tested, namely cisplatin (CIS), 5-fluorouracil (5-FU), and doxorubicin, induced a decrease in HeLa cell viability. Furthermore, melatonin significantly increased the cytotoxic effect of such chemotherapeutic agents. Consistently, costimulation of HeLa cells with any chemotherapeutic agent in the presence of melatonin further increased caspase-3 activation, particularly in CIS- and 5-FU-challenged cells. Likewise, concomitant treatments with melatonin and CIS significantly enhanced the ratio of cells entering mitochondrial apoptosis due to reactive oxygen species (ROS) overproduction, substantially augmented the population of apoptotic cells, and markedly enlarged DNA fragmentation compared to the treatments with CIS alone. Nonetheless, melatonin only displayed moderate chemosensitizing effects in 5-FU-stimulated HeLa cells, as suggested by slight increments in the percentage of cells stimulated for ROS production and in the proportion of early apoptotic cells compared to the treatments with 5-FU alone. In summary, our findings provided evidence that in vitro melatonin strongly enhances CIS-induced cytotoxicity and apoptosis in HeLa cells and, hence, the indoleamine could be potentially applied to cervical cancer treatment as a powerful synergistic agent.

Mitochondria as a critical target of the chemotheraputic agent cisplatin in head and neck cancer.

Q. Z. Yang,  Zhongmin Guo,  William K Cullen … (2007)
Cisplatin is among the most important chemotherapeutic agents ever developed. It is a critical component of therapeutic regimens in a broad range of malignancies. However, more than a generation after its clinical introduction, the exact mechanism of cisplatin action on tumor cells is not fully defined. The preponderance of research over the last three decades has focused on cisplatin interactions with nuclear DNA which are felt to lead to apoptotic cell death in sensitive cells. However, recent data have shown that cisplatin may have important direct interactions with mitochondria which can induce apoptosis and may account for a significant portion of the clinical activity associated with this drug. These direct interactions between cisplatin and mitochondria may have critical implications for our understanding of this class of drugs and the development of new therapeutic agents.