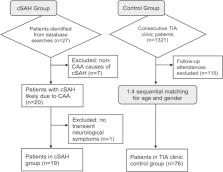 We undertook a single-centre, retrospective case–control study. We identified cases [patients with cSAH presenting with transient focal neurological episodes (TFNE)] from radiological and clinical databases of patients assessed at the National Hospital for Neurology and Neurosurgery and UCLH Comprehensive Stroke Service. We identified age- and gender-matched controls at a 1:4 ratio from a database of consecutive suspected TIA clinic attendances at UCLH. We compared presenting symptoms and vascular risk factors between cases and controls.

Simple clinical features could help distinguish cSAH-associated TFNE from suspected TIA, with relevance for investigation and management, including the use of antithrombotic drugs.

Peter M. Rothwell,  Matthew Giles,  Arvind Chandratheva … (2007)
The risk of recurrent stroke is up to 10% in the week after a transient ischaemic attack (TIA) or minor stroke. Modelling studies suggest that urgent use of existing preventive treatments could reduce the risk by 80-90%, but in the absence of evidence many health-care systems make little provision. Our aim was to determine the effect of more rapid treatment after TIA and minor stroke in patients who are not admitted direct to hospital. We did a prospective before (phase 1: April 1, 2002, to Sept 30, 2004) versus after (phase 2: Oct 1, 2004, to March 31, 2007) study of the effect on process of care and outcome of more urgent assessment and immediate treatment in clinic, rather than subsequent initiation in primary care, in all patients with TIA or minor stroke not admitted direct to hospital. The study was nested within a rigorous population-based incidence study of all TIA and stroke (Oxford Vascular Study; OXVASC), such that case ascertainment, investigation, and follow-up were complete and identical in both periods. The primary outcome was the risk of stroke within 90 days of first seeking medical attention, with independent blinded (to study period) audit of all events. Of the 1278 patients in OXVASC who presented with TIA or stroke (634 in phase 1 and 644 in phase 2), 607 were referred or presented direct to hospital, 620 were referred for outpatient assessment, and 51 were not referred to secondary care. 95% (n=591) of all outpatient referrals were to the study clinic. Baseline characteristics and delays in seeking medical attention were similar in both periods, but median delay to assessment in the study clinic fell from 3 (IQR 2-5) days in phase 1 to less than 1 (0-3) day in phase 2 (p<0.0001), and median delay to first prescription of treatment fell from 20 (8-53) days to 1 (0-3) day (p<0.0001). The 90-day risk of recurrent stroke in the patients referred to the study clinic was 10.3% (32/310 patients) in phase 1 and 2.1% (6/281 patients) in phase 2 (adjusted hazard ratio 0.20, 95% CI 0.08-0.49; p=0.0001); there was no significant change in risk in patients treated elsewhere. The reduction in risk was independent of age and sex, and early treatment did not increase the risk of intracerebral haemorrhage or other bleeding. Early initiation of existing treatments after TIA or minor stroke was associated with an 80% reduction in the risk of early recurrent stroke. Further follow-up is required to determine long-term outcome, but these results have immediate implications for service provision and public education about TIA and minor stroke.

Martin Fabricius,  Martin Lauritzen,  Rudolf Graf … (2010)
Cortical spreading depression (CSD) and depolarization waves are associated with dramatic failure of brain ion homeostasis, efflux of excitatory amino acids from nerve cells, increased energy metabolism and changes in cerebral blood flow (CBF). There is strong clinical and experimental evidence to suggest that CSD is involved in the mechanism of migraine, stroke, subarachnoid hemorrhage and traumatic brain injury. The implications of these findings are widespread and suggest that intrinsic brain mechanisms have the potential to worsen the outcome of cerebrovascular episodes or brain trauma. The consequences of these intrinsic mechanisms are intimately linked to the composition of the brain extracellular microenvironment and to the level of brain perfusion and in consequence brain energy supply. This paper summarizes the evidence provided by novel invasive techniques, which implicates CSD as a pathophysiological mechanism for this group of acute neurological disorders. The findings have implications for monitoring and treatment of patients with acute brain disorders in the intensive care unit. Drawing on the large body of experimental findings from animal studies of CSD obtained during decades we suggest treatment strategies, which may be used to prevent or attenuate secondary neuronal damage in acutely injured human brain cortex caused by depolarization waves.

Clopidogrel and Aspirin in Acute Ischemic Stroke and High-Risk TIA

Yuko Y. Palesch,  Anthony S Kim,  Jordan J. Elm … (2018)
Combination antiplatelet therapy with clopidogrel and aspirin may reduce the rate of recurrent stroke during the first 3 months after a minor ischemic stroke or transient ischemic attack (TIA). A trial of combination antiplatelet therapy in a Chinese population has shown a reduction in the risk of recurrent stroke. We tested this combination in an international population.