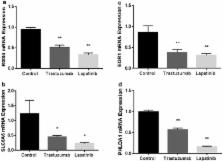 The targeted ERBB2 therapy, trastuzumab, has had a tremendous impact on management of patients with HER2+ breast cancer, leading to development and increased use of further HER2 targeted therapies. The major clinical side effect is cardiotoxicity but the mechanism is largely unknown. On the basis that gene expression is known to be altered in multiple models of heart failure, we examined differential gene expression of iPSC-derived cardiomyocytes treated at day 11 with the ERBB2 targeted monoclonal antibody, trastuzumab for 48 h and the small molecule tyrosine kinase inhibitor of EGFR and ERBB2.

Our study suggests dysregulation of cardiac gene expression and metabolism as key elements of ERBB2 signaling that could potentially be early biomarkers of cardiotoxicity.

Ligand-independent HER2/HER3/PI3K complex is disrupted by trastuzumab and is effectively inhibited by the PI3K inhibitor GDC-0941.

Teemu Junttila,  Robert W. Akita,  Kathryn Parsons … (2009)
Herceptin (trastuzumab) is the backbone of HER2-directed breast cancer therapy and benefits patients in both the adjuvant and metastatic settings. Here, we describe a mechanism of action for trastuzumab whereby antibody treatment disrupts ligand-independent HER2/HER3 interactions in HER2-amplified cells. The kinetics of dissociation parallels HER3 dephosphorylation and uncoupling from PI3K activity, leading to downregulation of proximal and distal AKT signaling, and correlates with the antiproliferative effects of trastuzumab. A selective and potent PI3K inhibitor, GDC-0941, is highly efficacious both in combination with trastuzumab and in the treatment of trastuzumab-resistant cells and tumors.

Cardiac metabolism and its interactions with contraction, growth, and survival of cardiomyocytes.

Stephen Kolwicz,  Suneet Purohit,  Rong Tian (2013)
The network for cardiac fuel metabolism contains intricate sets of interacting pathways that result in both ATP-producing and non-ATP-producing end points for each class of energy substrates. The most salient feature of the network is the metabolic flexibility demonstrated in response to various stimuli, including developmental changes and nutritional status. The heart is also capable of remodeling the metabolic pathways in chronic pathophysiological conditions, which results in modulations of myocardial energetics and contractile function. In a quest to understand the complexity of the cardiac metabolic network, pharmacological and genetic tools have been engaged to manipulate cardiac metabolism in a variety of research models. In concert, a host of therapeutic interventions have been tested clinically to target substrate preference, insulin sensitivity, and mitochondrial function. In addition, the contribution of cellular metabolism to growth, survival, and other signaling pathways through the production of metabolic intermediates has been increasingly noted. In this review, we provide an overview of the cardiac metabolic network and highlight alterations observed in cardiac pathologies as well as strategies used as metabolic therapies in heart failure. Lastly, the ability of metabolic derivatives to intersect growth and survival are also discussed.