Upper ocean oxygenation, evolution of RuBisCO and the Phanerozoic succession of phytoplankton 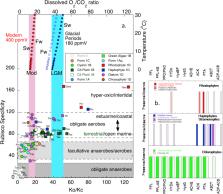 Evidence is compiled to demonstrate a redox scale within Earth's photosynthesisers that correlates the specificity of their RuBisCO with organismal metabolic tolerance to anoxia, and ecological selection by dissolved O 2/CO 2 and nutrients. The Form 1B RuBisCO found in the chlorophyte green algae, has a poor selectivity between the two dissolved substrates, O 2 and CO 2, at the active site. This enzyme appears adapted to lower O 2/CO 2 ratios, or more “anoxic” conditions and therefore requires additional energetic or nutrient investment in a carbon concentrating mechanism (CCM) to boost the intracellular CO 2/O 2 ratio and maintain competitive carboxylation rates under increasingly high O 2/CO 2 conditions in the environment. By contrast the coccolithophores and diatoms evolved containing the more selective Rhodophyte Form 1D RuBisCO, better adapted to a higher O 2/CO 2 ratio, or more oxic conditions. This Form 1D RuBisCO requires lesser energetic or nutrient investment in a CCM to attain high carboxylation rates under environmentally high O 2/CO 2 ratios. Such a physiological relationship may underpin the succession of phytoplankton in the Phanerozoic oceans: the coccolithophores and diatoms took over the oceanic realm from the incumbent cyanobacteria and green algae when the upper ocean became persistently oxygenated, alkaline and more oligotrophic. The facultatively anaerobic green algae, able to tolerate the anoxic conditions of the water column and a periodically inundated soil, were better poised to adapt to the fluctuating anoxia associated with periods of submergence and emergence and transition onto the land. The induction of a CCM may exert a natural limit to the improvement of RuBisCO efficiency over Earth history. Rubisco specificity appears to adapt on the timescale of ∼100 Myrs. So persistent elevation of CO 2/O 2 ratios in the intracellular environment around the enzyme, may induce a relaxation in RuBisCO selectivity for CO 2 relative to O 2. The most efficient RuBisCO for net carboxylation is likely to be found in CCM-lacking algae that have been exposed to hyperoxic conditions for at least 100 Myrs, such as intertidal brown seaweeds. 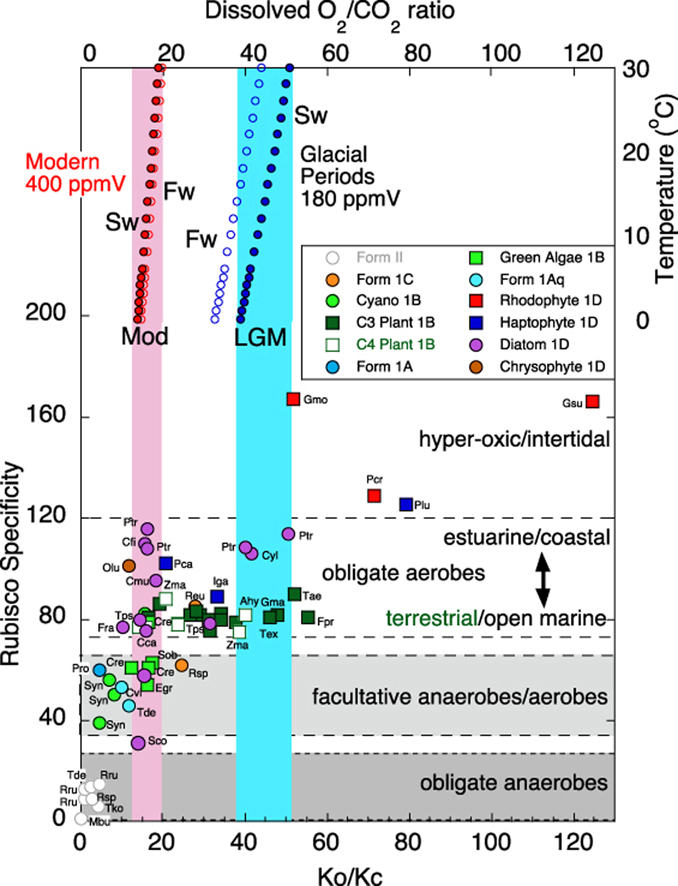 Carbon dioxide in water and seawater: the solubility of a non-ideal gas

Mario Giordano, John Beardall, John Raven (2005)
The evolution of organisms capable of oxygenic photosynthesis paralleled a long-term reduction in atmospheric CO2 and the increase in O2. Consequently, the competition between O2 and CO2 for the active sites of RUBISCO became more and more restrictive to the rate of photosynthesis. In coping with this situation, many algae and some higher plants acquired mechanisms that use energy to increase the CO2 concentrations (CO2 concentrating mechanisms, CCMs) in the proximity of RUBISCO. A number of CCM variants are now found among the different groups of algae. Modulating the CCMs may be crucial in the energetic and nutritional budgets of a cell, and a multitude of environmental factors can exert regulatory effects on the expression of the CCM components. We discuss the diversity of CCMs, their evolutionary origins, and the role of the environment in CCM modulation.