Development and implementation of treadmill exercise testing protocols in COPD 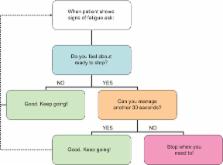 Because treadmill exercise testing is more representative of daily activity than cycle testing, we developed treadmill protocols to be used in various clinical settings as part of a two-year, multicenter, chronic obstructive pulmonary disease (COPD) trial evaluating the effect of tiotropium on exercise.

We enrolled 519 COPD patients aged 64.6 ± 8.3 years with a postbronchodilator forced expiratory volume in one second (FEV 1) of 1.25 ± 0.42 L, 44.3% ± 11.9% predicted. The patients performed symptom-limited treadmill tests where work rate ( Ẇ) was increased linearly using speed and grade adjustments every minute. On two subsequent visits, they performed constant Ẇ tests to exhaustion at 90% of maximum Ẇ from the incremental test.

The symptom-limited incremental and constant work treadmill protocol was well tolerated and appeared to be representative of the physiologic limitations of COPD.

The endurance shuttle walk: a new field test for the assessment of endurance capacity in chronic obstructive pulmonary disease.

Shannon M D Morgan,  S Revill,  J. Williams … (1999)
The purpose of this study was to develop an externally controlled, constant paced field walking test to assess endurance capacity in patients with chronic obstructive pulmonary disease (COPD). There were four objectives: (1) to develop a protocol; (2) to compare treadmill and shuttle walk tests of endurance capacity; (3) to examine the repeatability of the endurance shuttle walk test; and (4) to compare the sensitivity to pulmonary rehabilitation of endurance and incremental shuttle walk tests. The test was designed to complement the incremental shuttle walk test (ISWT) using the same 10 m shuttle course and an audio signal to control pace. The intensity of the field endurance test was related to a percentage of each patient's maximum field exercise performance assessed by the ISWT. A number of cassette tapes were pre-recorded with a range of audio signal frequencies to dictate walking speeds between 1.80 and 6.00 km/h. In the first limb of the study 10 patients with COPD (mean (SD) forced expiratory volume in one second (FEV1) 1.0 (0.36) 1, 35% predicted) performed three endurance shuttle walk tests (ESWTs) and three treadmill endurance tests. The walking speeds were calculated to elicit 75%, 85%, and 95% of each patient's maximum ISWT performance for the field tests and measured peak oxygen consumption for the treadmill tests. In a separate group of patients the repeatability of the ESWT at an intensity of 85% of the ISWT performance was evaluated. Finally, the ESWT (at the 85% intensity) and the ISWT were performed at the start of a five week control period and at the start and end of a seven week pulmonary rehabilitation programme in 21 patients with COPD (mean FEV1 0.80 (0.18) 1). The mean (SE) times achieved during the ESWT were 13.1 (2.3), 10.2 (2.5), and 5.3 (1.7) min for the walks at 75%, 85%, and 95% intensities, respectively. Patients tended to walk for longer on the treadmill than during the field tests at all intensities, but there were no significant differences between the end of test heart rates or Borg ratings of breathlessness or perceived exertion. Following one practice ESWT at the 85% intensity, the mean difference and limits of agreement (2SD) between tests 2 and 3 was +15 (42) s (p > 0.05). There was no significant change in performance on either test following the five week control period prior to rehabilitation. Following rehabilitation the ESWT duration increased by 160 (24)% and the ISWT distance increased by 32 (11)% (effect sizes 2.90 and 0.41, respectively). The ESWT was simple to perform, acceptable to all patients, and exhibited good repeatability after one practice walk. The test showed major improvement following rehabilitation and was more sensitive to change than the field test of maximal capacity.

Improvement in exercise tolerance with the combination of tiotropium and pulmonary rehabilitation in patients with COPD.

B. D. Cooper,  Richard Casaburi,  T J Witek … (2005)
Pulmonary rehabilitation (PR) improves exercise tolerance in COPD patients. Tiotropium is a once-daily, inhaled anticholinergic bronchodilator that provides sustained 24-h improvements in airflow and lung hyperinflation reduction. We hypothesized that ventilatory mechanics improvements from tiotropium would permit enhanced ability to train muscles of ambulation and therefore augment exercise tolerance benefits of PR. In a randomized, double-blind, placebo-controlled trial (tiotropium, n = 47; placebo, n = 44), tiotropium (18 microg qd) was administered to COPD patients participating in 8 weeks of PR (treadmill training three times a week; >/= 30 min per session) at 17 sites. Study drug was administered 5 weeks prior to, 8 weeks during, and 12 weeks following PR. The primary end point was treadmill walking (0% incline) endurance time at 80% of maximum speed attained in an initial incremental test. The transition dyspnea index (TDI), St. George's respiratory questionnaire (SGRQ), and rescue albuterol use were secondary end points. Mean age of the 93 participants was 67 years, 57% were men, and mean FEV(1) was 0.88 L (34% predicted). Mean endurance time differences (tiotropium minus placebo) prior to PR, at the end of PR, and 12 weeks after PR were 1.65 min (p = 0.183), 5.35 min (p = 0.025), and 6.60 min (p = 0.018), respectively. Mean TDI focal scores at the end of PR were 1.75 for tiotropium and 0.91 for placebo (p > 0.05). At 12 weeks after PR, TDI focal scores were 1.75 for tiotropium and 0.08 for placebo (p 0.05). Mean albuterol use declined following PR plus tiotropium, compared to PR alone (p

Efficacy of salmeterol xinafoate in the treatment of COPD.

Donald Mahler,  James Donohue,  Robert Barbee … (1999)
To examine and compare the efficacy and safety of salmeterol xinafoate, a long-acting inhaled beta2-adrenergic agonist, with inhaled ipratropium bromide and inhaled placebo in patients with COPD. A stratified, randomized, double-blind, double-dummy, placebo-controlled, parallel group clinical trial. Multiple sites at clinics and university medical centers throughout the United States. Four hundred eleven symptomatic patients with COPD with FEV1 < or = 65% predicted and no clinically significant concurrent disease. Comparison of inhaled salmeterol (42 microg twice daily), inhaled ipratropium bromide (36 microg four times a day), and inhaled placebo (2 puffs four times a day) over 12 weeks. Salmeterol xinafoate was significantly (p < 0.0001) better than placebo and ipratropium in improving lung function at the recommended doses over the 12-week trial. Both salmeterol and ipratropium reduced dyspnea related to activities of daily living compared with placebo; this improvement was associated with reduced use of supplemental albuterol. Analyses of time to first COPD exacerbation revealed salmeterol to be superior to placebo and ipratropium (p < 0.05). Adverse effects were similar among the three treatments. These collective data support the use of salmeterol as first-line bronchodilator therapy for the long-term treatment of airflow obstruction in patients with COPD.