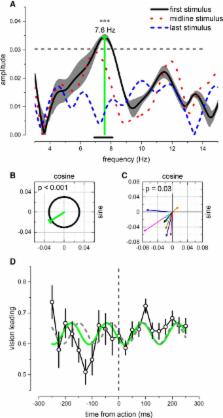 Action and perception are tightly coupled systems requiring coordination and synchronization over time. How the brain achieves synchronization is still a matter of debate, but recent experiments suggest that brain oscillations may play an important role in this process. Brain oscillations have been also proposed to be fundamental in determining time perception. Here, we had subjects perform an audiovisual temporal order judgment task to investigate the fine dynamics of temporal bias and sensitivity before and after the execution of voluntary hand movement (button-press). The reported order of the audiovisual sequence was rhythmically biased as a function of delay from hand action execution. Importantly, we found that it oscillated at a theta range frequency, starting ∼500 ms before and persisting ∼250 ms after the button-press, with consistent phase-locking across participants. Our results show that the perception of cross-sensory simultaneity oscillates rhythmically in synchrony with the programming phase of a voluntary action, demonstrating a link between action preparation and bias in temporal perceptual judgments.

Niko Busch (corresponding) ,  Julien Dubois,  Rufin VanRullen (2009)
Oscillations are ubiquitous in electrical recordings of brain activity. While the amplitude of ongoing oscillatory activity is known to correlate with various aspects of perception, the influence of oscillatory phase on perception remains unknown. In particular, since phase varies on a much faster timescale than the more sluggish amplitude fluctuations, phase effects could reveal the fine-grained neural mechanisms underlying perception. We presented brief flashes of light at the individual luminance threshold while EEG was recorded. Although the stimulus on each trial was identical, subjects detected approximately half of the flashes (hits) and entirely missed the other half (misses). Phase distributions across trials were compared between hits and misses. We found that shortly before stimulus onset, each of the two distributions exhibited significant phase concentration, but at different phase angles. This effect was strongest in the theta and alpha frequency bands. In this time-frequency range, oscillatory phase accounted for at least 16% of variability in detection performance and allowed the prediction of performance on the single-trial level. This finding indicates that the visual detection threshold fluctuates over time along with the phase of ongoing EEG activity. The results support the notion that ongoing oscillations shape our perception, possibly by providing a temporal reference frame for neural codes that rely on precise spike timing.

Peter Lakatos,  C. Schroeder,  Ryan M. O’Connell … (2007)
Recent anatomical, physiological, and neuroimaging findings indicate multisensory convergence at early, putatively unisensory stages of cortical processing. The objective of this study was to confirm somatosensory-auditory interaction in A1 and to define both its physiological mechanisms and its consequences for auditory information processing. Laminar current source density and multiunit activity sampled during multielectrode penetrations of primary auditory area A1 in awake macaques revealed clear somatosensory-auditory interactions, with a novel mechanism: somatosensory inputs appear to reset the phase of ongoing neuronal oscillations, so that accompanying auditory inputs arrive during an ideal, high-excitability phase, and produce amplified neuronal responses. In contrast, responses to auditory inputs arriving during the opposing low-excitability phase tend to be suppressed. Our findings underscore the instrumental role of neuronal oscillations in cortical operations. The timing and laminar profile of the multisensory interactions in A1 indicate that nonspecific thalamic systems may play a key role in the effect.

Temporal binding and the neural correlates of sensory awareness.

Steven Singer,  Matthias Engel (2001)
Theories of binding have recently come into the focus of the consciousness debate. In this review, we discuss the potential relevance of temporal binding mechanisms for sensory awareness. Specifically, we suggest that neural synchrony with a precision in the millisecond range may be crucial for conscious processing, and may be involved in arousal, perceptual integration, attentional selection and working memory. Recent evidence from both animal and human studies demonstrates that specific changes in neuronal synchrony occur during all of these processes and that they are distinguished by the emergence of fast oscillations with frequencies in the gamma-range.

This work was supported by the European Research Council (FP7 ECSPLAIN Grant 338866 to M.C.M.).

Correspondence should be addressed to Maria Concetta Morrone, Department of Translational Research on New Technologies in Medicines and Surgery, University of Pisa, via San Zeno 31, 56123 Pisa, Italy. E-mail: concetta@ 123456in.cnr.it .

This is an open-access article distributed under the terms of the Creative Commons Attribution 4.0 International license, which permits unrestricted use, distribution and reproduction in any medium provided that the original work is properly attributed.