The Fear of Pain Questionnaire: psychometric properties of a Brazilian version for adolescents and its relationship with brain-derived neurotrophic factor (BDNF) 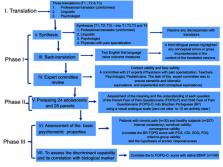 The primary aim was to assess the psychometric properties (including internal consistency, construct validity, criterion validity, criterion-group validity and responsiveness) of the Fear of Pain Questionnaire (FOPQ) for adolescents (FOPQ-A) and parents (FOPQ-P) translated to Brazilian Portuguese (BrP). The secondary aim was to analyze the factor structures and their ability to identify subjects with chronic pain conditions and identify the relationship of the BrP FOPQ-A with saliva brain-derived neurotrophic-factor (BDNF).

A cross-sectional study was conducted with 286 adolescents aged 11 to 18 (257 healthy adolescents [157 females] and 29 adolescents with chronic pain [16 females]). Parents and adolescents completed the BrP-FOPQ. A team of experts translated the FOPQ according to international guidelines. Convergent validity and factor analysis were performed. Later, a subsample (n=146) was used to correlate the BrP-FOPQ-A with saliva BDNF.

The BrP-FOPQ for adolescents and parents presented strong psychometric properties (Cronbach’s α equal to 0.92 and 0.91, respectively). BrP-FOPQ-A confirmatory factor analysis yielded a two-factor structure while the factorial analyses of BrP-FOPQ-P demonstrated that the best solution was a three-structure factorial. The BrP-FOPQ-P scores in healthy adolescents and those in chronic pain conditions was 34.13 (16.71) vs 43.14 (18.08), respectively. A generalized mixed model demonstrated that the scores in the BrP-FOPQ-A are higher in those with chronic pain conditions compared to healthy subjects (29.20 [12.77] vs 33.80 [10.76], respectively; Wald χ 2= 17.80; df=1, P<0.0001). The model revealed that the BDNF was positively correlated with the score of BrP-FOPQ-A and subjects with chronic pain showed higher levels of BDNF.

The BrP-FOPQ scores for adolescents and parents were found to be psychometrically robust and reliable instruments, with primary evidence of validity. Higher scores on the BrP-FOPQ-A were correlated positively with saliva BDNF and permitted the identification of subjects with chronic pain conditions.

Youden Index and optimal cut-point estimated from observations affected by a lower limit of detection.

Enrique Schisterman,  Timothy Perkins,  Marcus Ruopp … (2008)
The receiver operating characteristic (ROC) curve is used to evaluate a biomarker's ability for classifying disease status. The Youden Index (J), the maximum potential effectiveness of a biomarker, is a common summary measure of the ROC curve. In biomarker development, levels may be unquantifiable below a limit of detection (LOD) and missing from the overall dataset. Disregarding these observations may negatively bias the ROC curve and thus J. Several correction methods have been suggested for mean estimation and testing; however, little has been written about the ROC curve or its summary measures. We adapt non-parametric (empirical) and semi-parametric (ROC-GLM [generalized linear model]) methods and propose parametric methods (maximum likelihood (ML)) to estimate J and the optimal cut-point (c *) for a biomarker affected by a LOD. We develop unbiased estimators of J and c * via ML for normally and gamma distributed biomarkers. Alpha level confidence intervals are proposed using delta and bootstrap methods for the ML, semi-parametric, and non-parametric approaches respectively. Simulation studies are conducted over a range of distributional scenarios and sample sizes evaluating estimators' bias, root-mean square error, and coverage probability; the average bias was less than one percent for ML and GLM methods across scenarios and decreases with increased sample size. An example using polychlorinated biphenyl levels to classify women with and without endometriosis illustrates the potential benefits of these methods. We address the limitations and usefulness of each method in order to give researchers guidance in constructing appropriate estimates of biomarkers' true discriminating capabilities. Copyright 2008 WILEY-VCH Verlag GmbH & Co. KGaA, Weinheim

D Wolfer,  L Minichiello,  M Korte … (1999)
Brain-derived neurotrophic factor (BDNF) and its receptor TrkB regulate both short-term synaptic functions and long-term potentiation (LTP) of brain synapses, raising the possibility that BDNF/TrkB may be involved in cognitive functions. We have generated conditionally gene targeted mice in which the knockout of the trkB gene is restricted to the forebrain and occurs only during postnatal development. Adult mutant mice show increasingly impaired learning behavior or inappropriate coping responses when facing complex and/or stressful learning paradigms but succeed in simple passive avoidance learning. Homozygous mutants show impaired LTP at CA1 hippocampal synapses. Interestingly, heterozygotes show a partial but substantial reduction of LTP but appear behaviorally normal. Thus, CA1 LTP may need to be reduced below a certain threshold before behavioral defects become apparent.