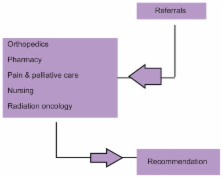 Our objective in this study was to review the experience of a one-stop multidisciplinary bone metastases clinic (BMC) that offers a coordinated multidisciplinary approach to the care of cancer patients with bone metastases in a tertiary cancer centre. Patients with symptomatic bone metastases were referred to BMC and assessed by a team of specialists in various disciplines – interventional radiology, orthopedic surgery, palliative medicine, and radiation oncology. At initial consultation, patient demographics, reasons for referral, and case disposition were recorded. From January 1999 to February 2005, a total of 272 patients with bone metastases were referred to the BMC. The median age was 65 years (range 28–95) and median KPS score at consultation was 60 (range 30–90). The majority of patients came from home (74%), while others came from a nursing home or the hospital (9%). Almost a third (28%) of patients had 2 or more reasons of referral, yielding a total of 354 reasons. The most common reason for referral was bone pain (42%), bone metastases (21%), high risk for pathological fracture (12%), and pathological fracture (10%). Of the 272 patients who received consultation, 40% received palliative radiotherapy, 19% received interventional surgery, 7% were referred to other support services such as palliative care, physiotherapy, and 7% had further investigation or imaging. A multidisciplinary clinic is useful for co-coordinating the management of bone metastatic disease in symptomatic patients.

A C Hatfield,  Charles Cleeland,  R Gonin … (1994)
Pain is often inadequately treated in patients with cancer. A total of 1308 outpatients with metastatic cancer from 54 treatment locations affiliated with the Eastern Cooperative Oncology Group rated the severity of their pain during the preceding week, as well as the degree of pain-related functional impairment and the degree of relief provided by analgesic drugs. Their physicians attributed the pain to various factors, described its treatment, and estimated the impact of pain on the patients' ability to function. We assessed the adequacy of prescribed analgesic drugs using guidelines developed by the World Health Organization, studied the factors that influenced whether analgesia was adequate, and determined the effects of inadequate analgesia on the patients' perception of pain relief and functional status. Sixty-seven percent of the patients (871 of 1308) reported that they had had pain or had taken analgesic drugs daily during the week preceding the study, and 36 percent (475 of 1308) had pain severe enough to impair their ability to function. Forty-two percent of those with pain (250 of the 597 patients for whom we had complete information) were not given adequate analgesic therapy. Patients seen at centers that treated predominantly minorities were three times more likely than those treated elsewhere to have inadequate pain management. A discrepancy between patient and physician in judging the severity of the patient's pain was predictive of inadequate pain management (odds ratio, 2.3). Other factors that predicted inadequate pain management included pain that physicians did not attribute to cancer (odds ratio, 1.9), better performance status (odds ratio, 1.8), age of 70 years or older (odds ratio, 2.4), and female sex (odds ratio, 1.5). Patients with less adequate analgesia reported less pain relief and greater pain-related impairment of function. Despite published guidelines for pain management, many patients with cancer have considerable pain and receive inadequate analgesia.

R Portenoy,  N Hagen (1990)
In the cancer population, the term breakthrough pain typically refers to a transitory flare of pain in the setting of chronic pain managed with opioid drugs. The prevalence and characteristics of this phenomenon have not been defined, and its impact on patient care is unknown. We developed operational definitions for breakthrough pain and its major characteristics, and applied these in a prospective survey of patients with cancer pain. Data were collected during a 3 month period from consecutive patients who reported moderate pain or less for more than 12 h daily and stable opioid dosing for a minimum of 2 consecutive days. Of 63 patients surveyed, 41 (64%) reported breakthrough pain, transient flares of severe or excruciating pain. Fifty-one different pains were described (median 4 pains/day; range 1-3600). Pain characteristics were extremely varied. Twenty-two (43%) pains were paroxysmal in onset; the remainder were more gradual. The duration varied from seconds to hours (median/range: 30 min/1-240 min), and 21 (41%) were both paroxysmal and brief (lancinating pain). Fifteen (29%) of the pains were related to the fixed opioid dose, occurring solely at the end of the dosing interval. Twenty-eight (55%) of the pains were precipitated; of these, 22 were caused by an action of the patient (incident pain), and 6 were associated with a non-volitional precipitant, such as flatulence. The pathophysiology of the pain was believed to be somatic in 17 (33%), visceral in 10 (20%), neuropathic in 14 (27%), and mixed in 10 (20%). Pain was related to the tumor in 42 (82%), the effects of therapy in 7 (14%), and neither in 2 (4%). Diverse interventions were employed to manage these pains, with variable efficacy. These data clarify the spectrum of breakthrough pains and indicate their importance in cancer pain management.

The effect of a single fraction compared to multiple fractions on painful bone metastases: a global analysis of the Dutch Bone Metastasis Study.

Elsbeth Steenland,  Jan W.H. Leer,  Hans JC van Houwelingen … (1999)
To answer the question whether a single fraction of radiotherapy that is considered more convenient to the patient is as effective as a dose of multiple fractions for palliation of painful bone metastases. 1171 patients were randomised to receive either 8 Gy x 1 (n = 585) or 4 Gy x 6 (n = 586). The primary tumour was in the breast in 39% of the patients, in the prostate in 23%, in the lung in 25% and in other locations in 13%. Bone metastases were located in the spine (30%), pelvis (36%), femur (10%), ribs (8%), humerus (6%) and other sites (10%). Questionnaires were mailed to collect information on pain, analgesics consumption, quality of life and side effects during treatment. The main endpoint was pain measured on a pain scale from 0 (no pain at all) to 10 (worst imaginable pain). Costs per treatment schedule were estimated. On average, patients participated in the study for 4 months. Median survival was 7 months. Response was defined as a decrease of at least two points as compared to the initial pain score. The difference in response between the two treatment groups proved not significant and stayed well within the margin of 10%. Overall, 71% experienced a response at some time during the first year. An analysis of repeated measures confirmed that the two treatment schedules were equivalent in terms of palliation. With regard to pain medication, quality of life and side effects no differences between the two treatment groups were found. The total number of retreatments was 188 (16%). This number was 147 (25%) in the 8 Gy x 1 irradiation group and 41 (7%) in the 4 Gy x 6 group. It was shown that the level of pain was an important reason to retreat. There were also indications that doctors were more willing to retreat patients in the single fraction group because time to retreatment was substantially shorter in this group and the preceding pain score was lower. Unexpectedly, more pathological fractures were observed in the single fraction group, but the absolute percentage was low. In a cost-analysis, the costs of the 4 Gy x 6 and the 8 Gy x 1 treatment schedules were calculated at 2305 and 1734 Euro respectively. Including the costs of retreatment reduced this 25% cost difference to only 8%. The saving of radiotherapy capacity, however, was considered the major economic advantage of the single dose schedule. The global analysis of the Dutch study indicates the equality of a single fraction as compared to a 6 fraction treatment in patients with painful bone metastases provided that 4 times more retreatments are accepted in the single dose group. This equality is also shown in long term survivors. A more detailed analysis of the study is in progress.