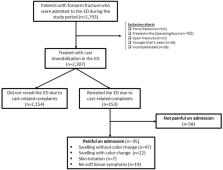 A retrospective cohort study of all children who were treated with cast immobilization for forearm fracture over a 7-year period was conducted. Patient demographics, fracture location, casting method (below elbow/above elbow), first visit pain scores, treatment with fracture reduction, and revisit data were collected. Multivariate regression was used to identify predictors of revisits due to CstRP within 72 hrs post-discharge.

A small number of children with forearm fractures revisited the ED due to CstRP. Study findings suggest that being treated with closed reduction and having a pain score ≥ 6 on the first visit were associated with ED revisit due to CstRP.

A randomized, controlled trial of acetaminophen, ibuprofen, and codeine for acute pain relief in children with musculoskeletal trauma.

Eric Clark,  Amy Plint,  R Correll … (2007)
Our goal was to determine which of 3 analgesics, acetaminophen, ibuprofen, or codeine, given as a single dose, provides the most efficacious analgesia for children presenting to the emergency department with pain from acute musculoskeletal injuries. Children 6 to 17 years old with pain from a musculoskeletal injury (to extremities, neck, and back) that occurred in the preceding 48 hours before presentation in the emergency department were randomly assigned to receive orally 15 mg/kg acetaminophen, 10 mg/kg ibuprofen, or 1 mg/kg codeine. Children, parents, and the research assistants were blinded to group assignment. The primary outcome was change in pain from baseline to 60 minutes after treatment with study medication as measured by using a visual analog scale. A total of 336 patients were randomly assigned, and 300 were included in the analysis of the primary outcome (100 in the acetaminophen group, 100 in the ibuprofen group, and 100 in the codeine group). Study groups were similar in age, gender, final diagnosis, previous analgesic given, and baseline pain score. Patients in the ibuprofen group had a significantly greater improvement in pain score (mean decrease: 24 mm) than those in the codeine (mean decrease: 11 mm) and acetaminophen (mean decrease: 12 mm) groups at 60 minutes. In addition, at 60 minutes more patients in the ibuprofen group achieved adequate analgesia (as defined by a visual analog scale <30 mm) than the other 2 groups. There was no significant difference between patients in the codeine and acetaminophen groups in the change in pain score at any time period or in the number of patients achieving adequate analgesia. For the treatment of acute traumatic musculoskeletal injuries, ibuprofen provides the best analgesia among the 3 study medications.

Gregory Singer,  K Searcy,  Warwick J L Wright … (2010)
Pediatric forearm fractures result in substantial morbidity and costs. Despite the success of public health efforts in the prevention of other injuries, the incidence of pediatric forearm fractures is increasing. Our objective is to characterize the epidemiology of forearm fractures in Washington, DC, children evaluated in an urban pediatric emergency department (ED). This retrospective study includes Washington, DC, children, aged 0 years to 17 years, treated for an isolated forearm fracture in the Children's National Medical Center ED from 2003 to 2006. Patients with bone mineralization disorders and repeat ED visits for the same fracture event were excluded. Chart review was done to obtain demographic and clinical data. Descriptive epidemiologic and bivariate analyses were conducted. This preliminary analysis included 929 patients. The majority of patients are male (64%) and African American (80%). The mean age (± standard deviation) is 8.4 years (±3.9). Weight-for-age percentile was ≥95% in 24.1% of cases. Most forearm fractures occurred during the spring season. The most common mechanism of injury was fall-related (83%) whereas direct trauma caused 10% of fractures. "Fall from monkey bars" was the specific mechanism of injury in 17% of all cases. The majority of forearm fractures (58%) resulted from minor trauma. Falls from monkey bars and minor trauma are implicated in the majority of childhood forearm fractures. The prevention strategies should target playground safety. Further research is needed to evaluate factors, including obesity and bone health, which may contribute to forearm fracture risk associated with minor trauma.

Comparison of short and long arm plaster casts for displaced fractures in the distal third of the forearm in children.

Roger T. Webb,  R Galpin,  David Armstrong (2005)
Various methods of cast immobilization have been recommended for the treatment of distal forearm fractures in children. The purpose of this study was to determine if short arm casts are as effective as long arm casts in the treatment of displaced fractures of the distal third of the forearm in these patients. In a prospective randomized trial, consecutive patients, four years of age or older, who presented to The Women's and Children's Hospital of Buffalo with a displaced fracture of the distal third of the forearm were randomized to treatment with a short or long arm plaster cast. Radiographs were analyzed for displacement, angulation, and deviation at the time of injury, after reduction, and at subsequent follow-up intervals. The cast index at the fracture level, used to assess the quality of the cast molding, was determined from the postreduction radiographs. Changes between postreduction and final values for displacement, angulation, and deviation; the ranges of motion of both wrists and elbows; the need for physical therapy; and responses to a questionnaire used to evaluate the effects of the cast on activities of daily living were compared between the groups. One hundred and thirteen of the 151 patients who were assessed for eligibility were analyzed. The follow-up rate was 92%, and the average duration of follow-up was eight months. Sixty long arm casts and fifty-three short arm casts were used. There were no significant differences between the two groups with regard to patient demographics, initial fracture characteristics, mechanism of injury, cast index, or the change in displacement, angulation, or deviation during treatment. The fractures that lost reduction in the cast had significantly higher cast indices, indicating poor cast-molding. A comparison of partially and completely displaced fractures revealed no difference between the groups with regard to the change between the postreduction and final amount of displacement. Patients treated with a short arm cast missed fewer school days and were less likely to require assistance with various activities of daily living. A well-molded short arm cast can be used as effectively as a long arm cast to treat fractures of the distal third of the forearm in children four years of age and older, and they interfere less with daily activities.