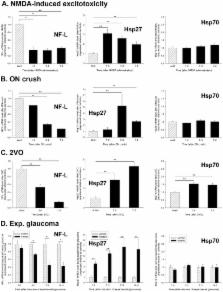 Inducible heat shock proteins (Hsps) are upregulated in the central nervous system in response to a wide variety of injuries. Surprisingly, however, no coherent picture has emerged regarding the magnitude, duration and cellular distribution of inducible Hsps in the visual system following injury to retinal ganglion cells (RGCs). The current study sought, therefore, to achieve the following two objectives. The first aim of this study was to systematically characterise the patterns of Hsp27 and −70 expression in the retina and optic nerve in four discrete models of retinal ganglion cell (RGC) degeneration: axonal injury (ON crush), somato-dendritic injury (NMDA-induced excitotoxicity), chronic hypoperfusion (bilateral occlusion of the carotid arteris) and experimental glaucoma. The second aim was to document Hsp27 and −70 expression in the optic tract, the subcortical retinorecipient areas of the brain, and the visual cortex during Wallerian degeneration of RGC axons. Hsp27 was robustly upregulated in the retina in each injury paradigm, with the chronic models, 2VO and experimental glaucoma, displaying a more persistent Hsp27 transcriptional response than the acute models. Hsp27 expression was always associated with astrocytes and with a subset of RGCs in each of the models excluding NMDA. Hsp27 was present within astrocytes of the optic nerve/optic tract in control rats. During Wallerian degeneration, Hsp27 was upregulated in the optic nerve/optic tract and expressed de novo by astrocytes in the lateral geniculate nucleus and the stratum opticum of the superior colliculus. Conversely, the results of our study indicate Hsp70 was minimally induced in any of the models of injury, either in the retina, or in the optic nerve/optic tract, or in the subcortical, retinorecipient areas of the brain. The findings of the present study augment our understanding of the involvement of Hsp27 and Hsp70 in the response of the visual system to RGC degeneration.

Stefan Hofmann,  H Feder (1998)
Molecular chaperones, including the heat-shock proteins (Hsps), are a ubiquitous feature of cells in which these proteins cope with stress-induced denaturation of other proteins. Hsps have received the most attention in model organisms undergoing experimental stress in the laboratory, and the function of Hsps at the molecular and cellular level is becoming well understood in this context. A complementary focus is now emerging on the Hsps of both model and nonmodel organisms undergoing stress in nature, on the roles of Hsps in the stress physiology of whole multicellular eukaryotes and the tissues and organs they comprise, and on the ecological and evolutionary correlates of variation in Hsps and the genes that encode them. This focus discloses that (a) expression of Hsps can occur in nature, (b) all species have hsp genes but they vary in the patterns of their expression, (c) Hsp expression can be correlated with resistance to stress, and (d) species' thresholds for Hsp expression are correlated with levels of stress that they naturally undergo. These conclusions are now well established and may require little additional confirmation; many significant questions remain unanswered concerning both the mechanisms of Hsp-mediated stress tolerance at the organismal level and the evolutionary mechanisms that have diversified the hsp genes.

Denise M. Inman,  P Horner,  Rebecca Sappington … (2010)
An early hallmark of neuronal degeneration is distal transport loss and axon pathology. Glaucoma involves the degeneration of retinal ganglion cell (RGC) neurons and their axons in the optic nerve. Here we show that, like other neurodegenerations, distal axon injury appears early in mouse glaucoma. Where RGC axons terminate in the superior colliculus, reduction of active transport follows a retinotopic pattern resembling glaucomatous vision loss. Like glaucoma, susceptibility to transport deficits increases with age and is not necessarily associated with elevated ocular pressure. Transport deficits progress distal-to-proximal, appearing in the colliculus first followed by more proximal secondary targets and then the optic tract. Transport persists through the optic nerve head before finally failing in the retina. Although axon degeneration also progresses distal-to-proximal, myelinated RGC axons and their presynaptic terminals persist in the colliculus well after transport fails. Thus, distal transport loss is predegenerative and may represent a therapeutic target.

Identification of Ischemic Regions in a Rat Model of Stroke

Anke Popp,  Nadine Jaenisch,  Otto Witte … (2009)
Background Investigations following stroke first of all require information about the spatio-temporal dimension of the ischemic core as well as of perilesional and remote affected tissue. Here we systematically evaluated regions differently impaired by focal ischemia. Methodology/Principal Findings Wistar rats underwent a transient 30 or 120 min suture-occlusion of the middle cerebral artery (MCAO) followed by various reperfusion times (2 h, 1 d, 7 d, 30 d) or a permanent MCAO (1 d survival). Brains were characterized by TTC, thionine, and immunohistochemistry using MAP2, HSP72, and HSP27. TTC staining reliably identifies the infarct core at 1 d of reperfusion after 30 min MCAO and at all investigated times following 120 min and permanent MCAO. Nissl histology denotes the infarct core from 2 h up to 30 d after transient as well as permanent MCAO. Absent and attenuated MAP2 staining clearly identifies the infarct core and perilesional affected regions at all investigated times, respectively. HSP72 denotes perilesional areas in a limited post-ischemic time (1 d). HSP27 detects perilesional and remote impaired tissue from post-ischemic day 1 on. Furthermore a simultaneous expression of HSP72 and HSP27 in perilesional neurons was revealed. Conclusions/Significance TTC and Nissl staining can be applied to designate the infarct core. MAP2, HSP72, and HSP27 are excellent markers not only to identify perilesional and remote areas but also to discriminate affected neuronal and glial populations. Moreover markers vary in their confinement to different reperfusion times. The extent and consistency of infarcts increase with prolonged occlusion of the MCA. Therefore interindividual infarct dimension should be precisely assessed by the combined use of different markers as described in this study.

Support from the National Health and Medical Research Council (project grant: APP1050982) and the Ophthalmic Research Institute of Ophthalmology is gratefully acknowledged. The funders had no role in study design, data collection and analysis, decision to publish, or preparation of the manuscript.