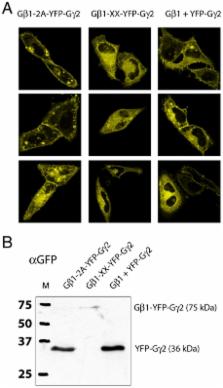 Co-expression of proteins is generally achieved by introducing two (or more) independent plasmids into cells, each driving the expression of a different protein of interest. However, the relative expression levels may vary strongly between individual cells and cannot be controlled. Ideally, co-expression occurs at a defined ratio, which is constant among cells. This feature is of particular importance for quantitative single cell studies, especially those employing bimolecular Förster Resonance Energy Transfer (FRET) sensors.

Four co-expression strategies based on co-transfection, a dual promotor plasmid, an internal ribosome entry site (IRES) and a viral 2A peptide were selected. Co-expression of two spectrally separable fluorescent proteins in single living cells was quantified. It is demonstrated that the 2A peptide strategy can be used for robust equimolar co-expression, while the IRES sequence allows expression of two proteins at a ratio of approximately 3:1. Combined 2A and IRES elements were used for the construction of a single plasmid that drives expression of three individual proteins, which generates a FRET sensor for measuring heterotrimeric G-protein activation. The plasmid drives co-expression of donor and acceptor tagged subunits, with reduced heterogeneity, and can be used to measure G-protein activation in single living cells.

Quantitative co-expression of two or more proteins can be achieved with little cell-to-cell variability. This finding enables reliable co-expression of donor and acceptor tagged proteins for FRET studies, which is of particular importance for the development of novel bimolecular sensors that can be expressed from single plasmid.

Keisuke Kaji,  Katherine Norrby,  Agnieszka Paca … (2009)
Reprogramming of somatic cells to pluripotency, thereby creating induced pluripotent stem (iPS) cells, promises to transform regenerative medicine. Most instances of direct reprogramming have been achieved by forced expression of defined factors using multiple viral vectors1-7. However, such iPS cells contain a large number of viral vector integrations1,8, any one of which could cause unpredictable genetic dysfunction. While c-Myc is dispensable for reprogramming9,10, complete elimination of the other exogenous factors is also desired since ectopic expression of either Oct4 or Klf4 can induce dysplasia11,12. Two transient transfection reprogramming methods have been published to address this issue13,14. However, the efficiency of either approach is extremely low, and neither has thus far been applied successfully to human cells. Here we show that non-viral transfection of a single multiprotein expression vector, which comprises the coding sequences of c-Myc​,​ Klf4​,​ Oct4 and Sox2 linked with 2A peptides, can reprogram both mouse and human fibroblasts. Moreover, the transgene can be removed once reprogramming has been achieved. iPS cells produced with this non-viral vector show robust expression of pluripotency markers, indicating a reprogrammed state confirmed functionally by in vitro differentiation assays and formation of adult chimeric mice. When the single vector reprogramming system was combined with a piggyBac transposon15,16 we succeeded in establishing reprogrammed human cell lines from embryonic fibroblasts with robust expression of pluripotency markers. This system minimizes genome modification in iPS cells and enables complete elimination of exogenous reprogramming factors, efficiently providing iPS cells that are applicable to regenerative medicine, drug screening and the establishment of disease models.