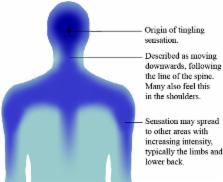 Autonomous Sensory Meridian Response (ASMR) is a previously unstudied sensory phenomenon, in which individuals experience a tingling, static-like sensation across the scalp, back of the neck and at times further areas in response to specific triggering audio and visual stimuli. This sensation is widely reported to be accompanied by feelings of relaxation and well-being. The current study identifies several common triggers used to achieve ASMR, including whispering, personal attention, crisp sounds and slow movements. Data obtained also illustrates temporary improvements in symptoms of depression and chronic pain in those who engage in ASMR. A high prevalence of synaesthesia (5.9%) within the sample suggests a possible link between ASMR and synaesthesia, similar to that of misophonia. Links between number of effective triggers and heightened flow state suggest that flow may be necessary to achieve sensations associated with ASMR.

The clinical use of mindfulness meditation for the self-regulation of chronic pain.

Jon Kabat-Zinn,  Leslie Lipworth,  Robert G. Burney (1985)
Ninety chronic pain patients were trained in mindfulness meditation in a 10-week Stress Reduction and Relaxation Program. Statistically significant reductions were observed in measures of present-moment pain, negative body image, inhibition of activity by pain, symptoms, mood disturbance, and psychological symptomatology, including anxiety and depression. Pain-related drug utilization decreased and activity levels and feelings of self-esteem increased. Improvement appeared to be independent of gender, source of referral, and type of pain. A comparison group of pain patients did not show significant improvement on these measures after traditional treatment protocols. At follow-up, the improvements observed during the meditation training were maintained up to 15 months post-meditation training for all measures except present-moment pain. The majority of subjects reported continued high compliance with the meditation practice as part of their daily lives. The relationship of mindfulness meditation to other psychological methods for chronic pain control is discussed.

Flow: The Psychology of Optimal Experience

A standardized test battery for the study of synesthesia.

Deepak Sagaram,  David M Eagleman,  Devojit K. Sarma … (2007)
Synesthesia is an unusual condition in which stimulation of one modality evokes sensation or experience in another modality. Although discussed in the literature well over a century ago, synesthesia slipped out of the scientific spotlight for decades because of the difficulty in verifying and quantifying private perceptual experiences. In recent years, the study of synesthesia has enjoyed a renaissance due to the introduction of tests that demonstrate the reality of the condition, its automatic and involuntary nature, and its measurable perceptual consequences. However, while several research groups now study synesthesia, there is no single protocol for comparing, contrasting and pooling synesthetic subjects across these groups. There is no standard battery of tests, no quantifiable scoring system, and no standard phrasing of questions. Additionally, the tests that exist offer no means for data comparison. To remedy this deficit we have devised the Synesthesia Battery. This unified collection of tests is freely accessible online (http://www.synesthete.org). It consists of a questionnaire and several online software programs, and test results are immediately available for use by synesthetes and invited researchers. Performance on the tests is quantified with a standard scoring system. We introduce several novel tests here, and offer the software for running the tests. By presenting standardized procedures for testing and comparing subjects, this endeavor hopes to speed scientific progress in synesthesia research.

The authors declare there was no funding for this work.