The Prevalence and Impact of Model Violations in Phylogenetic Analysis 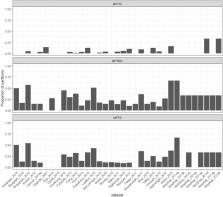 In phylogenetic inference, we commonly use models of substitution which assume that sequence evolution is stationary, reversible, and homogeneous (SRH). Although the use of such models is often criticized, the extent of SRH violations and their effects on phylogenetic inference of tree topologies and edge lengths are not well understood. Here, we introduce and apply the maximal matched-pairs tests of homogeneity to assess the scale and impact of SRH model violations on 3,572 partitions from 35 published phylogenetic data sets. We show that roughly one-quarter of all the partitions we analyzed (23.5%) reject the SRH assumptions, and that for 25% of data sets, tree topologies inferred from all partitions differ significantly from topologies inferred using the subset of partitions that do not reject the SRH assumptions. This proportion increases when comparing trees inferred using the subset of partitions that rejects the SRH assumptions, to those inferred from partitions that do not reject the SRH assumptions. These results suggest that the extent and effects of model violation in phylogenetics may be substantial. They highlight the importance of testing for model violations and possibly excluding partitions that violate models prior to tree reconstruction. Our results also suggest that further effort in developing models that do not require SRH assumptions could lead to large improvements in the accuracy of phylogenomic inference. The scripts necessary to perform the analysis are available in https://github.com/roblanf/SRHtests, and the new tests we describe are available as a new option in IQ-TREE ( http://www.iqtree.org).

Estimating the pattern of nucleotide substitution.

Zhen Yang (1994)
Knowledge of the pattern of nucleotide substitution is important both to our understanding of molecular sequence evolution and to reliable estimation of phylogenetic relationships. The method of parsimony analysis, which has been used to estimate substitution patterns in real sequences, has serious drawbacks and leads to results difficult to interpret. In this paper a model-based maximum likelihood approach is proposed for estimating substitution patterns in real sequences. Nucleotide substitution is assumed to follow a homogeneous Markov process, and the general reversible process model (REV) and the unrestricted model without the reversibility assumption are used. These models are also applied to examine the adequacy of the model of Hasegawa et al. (J. Mol. Evol. 1985;22:160-174) (HKY85). Two data sets are analyzed. For the psi eta-globin pseudogenes of six primate species, the REV models fits the data much better than HKY85, while, for a segment of mtDNA sequences from nine primates, REV cannot provide a significantly better fit than HKY85 when rate variation over sites is taken into account in the models. It is concluded that the use of the REV model in phylogenetic analysis can be recommended, especially for large data sets or for sequences with extreme substitution patterns, while HKY85 may be expected to provide a good approximation. The use of the unrestricted model does not appear to be worthwhile.

Ziheng Yang,  Bruce Rannala (2012)
Phylogenies are important for addressing various biological questions such as relationships among species or genes, the origin and spread of viral infection and the demographic changes and migration patterns of species. The advancement of sequencing technologies has taken phylogenetic analysis to a new height. Phylogenies have permeated nearly every branch of biology, and the plethora of phylogenetic methods and software packages that are now available may seem daunting to an experimental biologist. Here, we review the major methods of phylogenetic analysis, including parsimony, distance, likelihood and Bayesian methods. We discuss their strengths and weaknesses and provide guidance for their use.