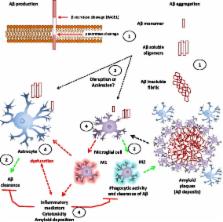 Docosahexaenoic acid (DHA) is an omega-3 (ω-3) long-chain polyunsaturated fatty acid (LCPUFA) relevant for brain function. It has largely been explored as a potential candidate to treat Alzheimer’s disease (AD). Clinical evidence favors a role for DHA in the improvement of cognition in very early stages of the AD. In response to stress or damage, DHA generates oxygenated derivatives called docosanoids that can activate the peroxisome proliferator-activated receptor γ (PPARγ). In conjunction with activated retinoid X receptors (RXR), PPARγ modulates inflammation, cell survival, and lipid metabolism. As an early event in AD, inflammation is associated with an excess of amyloid β peptide (Aβ) that contributes to neural insult. Glial cells are recognized to be actively involved during AD, and their dysfunction is associated with the early appearance of this pathology. These cells give support to neurons, remove amyloid β peptides from the brain, and modulate inflammation. Since DHA can modulate glial cell activity, the present work reviews the evidence about this modulation as well as the effect of docosanoids on neuroinflammation and in some AD models. The evidence supports PPARγ as a preferred target for gene modulation. The effective use of DHA and/or its derivatives in a subgroup of people at risk of developing AD is discussed.

Kaj Blennow,  Mony J. de Leon,  Henrik Zetterberg (2006)
Alzheimer's disease is the most common cause of dementia. Research advances have enabled detailed understanding of the molecular pathogenesis of the hallmarks of the disease--ie, plaques, composed of amyloid beta (Abeta), and tangles, composed of hyperphosphorylated tau. However, as our knowledge increases so does our appreciation for the pathogenic complexity of the disorder. Familial Alzheimer's disease is a very rare autosomal dominant disease with early onset, caused by mutations in the amyloid precursor protein and presenilin genes, both linked to Abeta metabolism. By contrast with familial disease, sporadic Alzheimer's disease is very common with more than 15 million people affected worldwide. The cause of the sporadic form of the disease is unknown, probably because the disease is heterogeneous, caused by ageing in concert with a complex interaction of both genetic and environmental risk factors. This seminar reviews the key aspects of the disease, including epidemiology, genetics, pathogenesis, diagnosis, and treatment, as well as recent developments and controversies.

Robert V. Farese,  Tobias Walther (2009)
Long underappreciated as important cellular organelles, lipid droplets are finally being recognized as dynamic structures with a complex and interesting biology. In light of this newfound respect, we discuss emerging views on lipid droplet biology and speculate on the major advances to come.

Linda Arterburn,  Eileen Hall,  Harry Oken (2006)
n-3 Fatty acids have important visual, mental, and cardiovascular health benefits throughout the life cycle. Biodistribution, interconversion, and dose response data are reviewed herein to provide a basis for more rational n-3 dose selections. Docosahexaenoic acid (DHA) is the principal n-3 fatty acid in tissues and is particularly abundant in neural and retinal tissue. Limited storage of the n-3 fatty acids in adipose tissue suggests that a continued dietary supply is needed. A large proportion of dietary alpha-linolenic acid (ALA) is oxidized, and because of limited interconversion of n-3 fatty acids in humans, ALA supplementation does not result in appreciable accumulation of long-chain n-3 fatty acids in plasma. Eicosapentaenoic acid (EPA) but not DHA concentrations in plasma increase in response to dietary EPA. Dietary DHA results in a dose-dependent, saturable increase in plasma DHA concentrations and modest increases in EPA concentrations. Plasma DHA concentrations equilibrate in approximately 1 mo and then remain at steady state throughout supplementation. DHA doses of approximately 2 g/d result in a near maximal plasma response. Both dietary DHA and EPA reduce plasma arachidonic acid concentrations. Tissue contents of DHA and EPA also increase in response to supplementation with these fatty acids. Human milk contents of DHA are dependent on diet, and infant DHA concentrations are determined by their dietary intake of this fatty acid. We conclude that the most predictable way to increase a specific long-chain n-3 fatty acid in plasma, tissues, or human milk is to supplement with the fatty acid of interest.