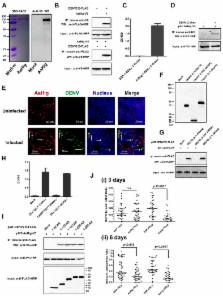 The central nervous system plays a predominant role in organisms associated with cognition and higher-order functions, which is key to their normal behavior and successful survival. Many mosquito-borne flaviviruses particularly invade the central nervous system in vertebrates, resulting in dramatic neural degeneration and damage. As natural vectors, mosquitoes are highly permissive to flaviviral infection that can be persistent in the mosquito nervous system. However, the infection intriguingly does neither lead to significant malignant pathological sequelae, nor dramatically influences mosquito behavior or lifespan, and thus mosquitoes can transmit viruses efficiently. Little is known about the neuron-specific resistant mechanism in viral infection of mosquitoes. Here we report that a neuron-specific factor specifically controls flaviviral replication in the mosquito nervous system by interfering with viral entry, and its activity prevents lethal flaviviral infection of mosquitoes. Our study provides insight into the sophisticated interactions between mosquito-borne viruses and their vectors, and offers an important target for arboviral limitation in nature.

Xiao-Hong Wang, Roghiyh Aliyari, Wan-Xiang Li … (2006)
Innate immunity against bacterial and fungal pathogens is mediated by Toll and immune deficiency (Imd) pathways, but little is known about the antiviral response in Drosophila. Here, we demonstrate that an RNA interference pathway protects adult flies from infection by two evolutionarily diverse viruses. Our work also describes a molecular framework for the viral immunity, in which viral double-stranded RNA produced during infection acts as the pathogen trigger whereas Drosophila Dicer-2 and Argonaute-2 act as host sensor and effector, respectively. These findings establish a Drosophila model for studying the innate immunity against viruses in animals.

An evolutionary conserved function of the JAK-STAT pathway in anti-dengue defense.

This work was funded by the National Key Technologies Research and Development Program of China with grant 2013ZX10004-610 to GC, the National Natural Science Foundation of China with grants 81301412 and 81422028 to GC, 61472205 to XP and 81290342 to GL, the National Key Basic Research Program of MOST with grant 2013CB911500 to GC, the development grant of State Key Laboratory for Infectious Disease Prevention and Control 2014SKLID103 to GL, and the NIH grants AI099625 and AI103807 to PW. GC is a Newton Advanced Fellow awarded by the Academy of Medical Sciences and the Newton Fund, and a Janssen Investigator of Tsinghua University. The funders had no role in study design, data collection and analysis, decision to publish, or preparation of the manuscript.