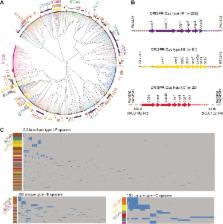 Pseudomonas aeruginosa is an antibiotic-refractory pathogen with a large genome and extensive genotypic diversity. Historically, P. aeruginosa has been a major model system for understanding the molecular mechanisms underlying type I clustered regularly interspaced short palindromic repeat (CRISPR) and CRISPR-associated protein (CRISPR-Cas)-based bacterial immune system function. However, little information on the phylogenetic distribution and potential role of these CRISPR-Cas systems in molding the P. aeruginosa accessory genome and antibiotic resistance elements is known. Computational approaches were used to identify and characterize CRISPR-Cas systems within 672 genomes, and in the process, we identified a previously unreported and putatively mobile type I-C P. aeruginosa CRISPR-Cas system. Furthermore, genomes harboring noninhibited type I-F and I-E CRISPR-Cas systems were on average ~300 kb smaller than those without a CRISPR-Cas system. In silico analysis demonstrated that the accessory genome ( n = 22,036 genes) harbored the majority of identified CRISPR-Cas targets. We also assembled a global spacer library that aided the identification of difficult-to-characterize mobile genetic elements within next-generation sequencing (NGS) data and allowed CRISPR typing of a majority of P. aeruginosa strains. In summary, our analysis demonstrated that CRISPR-Cas systems play an important role in shaping the accessory genomes of globally distributed P. aeruginosa isolates.

P. aeruginosa is both an antibiotic-refractory pathogen and an important model system for type I CRISPR-Cas bacterial immune systems. By combining the genome sequences of 672 newly and previously sequenced genomes, we were able to provide a global view of the phylogenetic distribution, conservation, and potential targets of these systems. This analysis identified a new and putatively mobile P. aeruginosa CRISPR-Cas subtype, characterized the diverse distribution of known CRISPR-inhibiting genes, and provided a potential new use for CRISPR spacer libraries in accessory genome analysis. Our data demonstrated the importance of CRISPR-Cas systems in modulating the accessory genomes of globally distributed strains while also providing substantial data for subsequent genomic and experimental studies in multiple fields. Understanding why certain genotypes of P. aeruginosa are clinically prevalent and adept at horizontally acquiring virulence and antibiotic resistance elements is of major clinical and economic importance.

Erik Sontheimer,  Luciano A. Marraffini,  James Mussell (2009)
Horizontal gene transfer (HGT) in bacteria and archaea occurs through phage transduction, transformation, or conjugation, and the latter is particularly important for the spread of antibiotic resistance. Clustered, regularly interspaced, short palindromic repeat (CRISPR) loci confer sequence-directed immunity against phages. A clinical isolate of Staphylococcus epidermidis harbors a CRISPR spacer that matches the nickase gene present in nearly all staphylococcal conjugative plasmids. Here we show that CRISPR interference prevents conjugation and plasmid transformation in S. epidermidis. Insertion of a self-splicing intron into nickase blocks interference despite the reconstitution of the target sequence in the spliced mRNA, which indicates that the interference machinery targets DNA directly. We conclude that CRISPR loci counteract multiple routes of HGT and can limit the spread of antibiotic resistance in pathogenic bacteria.

C Pourcel,  G Vergnaud,  G. Salvignol … (2005)
The remarkable repetitive elements called CRISPRs (clustered regularly interspaced short palindromic repeats) consist of repeats interspaced with non-repetitive elements or 'spacers'. CRISPRs are present in both archaea and bacteria, in association with genes involved in DNA recombination and repair. In the Yersinia pestis genome, three such elements are found at three distinct loci, one of them being highly polymorphic. The authors have sequenced a total of 109 alleles of the three Y. pestis CRISPRs and they describe 29 new spacers, most being specific to one isolate. In nine strains of Yersinia pseudotuberculosis, 132 spacers were found, of which only three are common to Y. pestis isolates. In Y. pestis of the Orientalis biovar investigated in detail here, deletion of motifs is observed but it appears that addition of new motifs to a common ancestral element is the most frequent event. This takes place at the three different loci, although at a higher rate in one of the loci, and the addition of new motifs is polarized. Interestingly, the most recently acquired spacers were found to have a homologue at another locus in the genome, the majority of these inside an inactive prophage. This is believed to be the first time that the origin of the spacers in CRISPR elements has been explained. The CRISPR structure provides a new and robust identification tool.

Antonis Rokas,  C Yandava,  Simon Smith … (2008)
One of the hallmarks of the Gram-negative bacterium Pseudomonas aeruginosa is its ability to thrive in diverse environments that includes humans with a variety of debilitating diseases or immune deficiencies. Here we report the complete sequence and comparative analysis of the genomes of two representative P. aeruginosa strains isolated from cystic fibrosis (CF) patients whose genetic disorder predisposes them to infections by this pathogen. The comparison of the genomes of the two CF strains with those of other P. aeruginosa presents a picture of a mosaic genome, consisting of a conserved core component, interrupted in each strain by combinations of specific blocks of genes. These strain-specific segments of the genome are found in limited chromosomal locations, referred to as regions of genomic plasticity. The ability of P. aeruginosa to shape its genomic composition to favor survival in the widest range of environmental reservoirs, with corresponding enhancement of its metabolic capacity is supported by the identification of a genomic island in one of the sequenced CF isolates, encoding enzymes capable of degrading terpenoids produced by trees. This work suggests that niche adaptation is a major evolutionary force influencing the composition of bacterial genomes. Unlike genome reduction seen in host-adapted bacterial pathogens, the genetic capacity of P. aeruginosa is determined by the ability of individual strains to acquire or discard genomic segments, giving rise to strains with customized genomic repertoires. Consequently, this organism can survive in a wide range of environmental reservoirs that can serve as sources of the infecting organisms.

This article is a direct contribution from a Fellow of the American Academy of Microbiology.