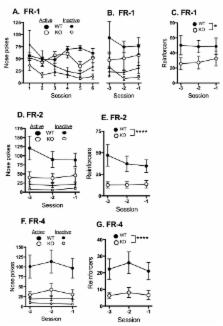 A large body of evidence in humans and preclinical models supports a role for the endocannabinoid system in the proper execution of motivated or goal-directed behaviors. Operant sensation seeking (OSS) is a task that uses varied sensory stimuli as a reinforcer to maintain operant responding in mice. The purpose of the studies in this report was to begin to explore the role of endocannabinoid signaling in OSS utilizing cannabinoid receptor 1 (CB1R) and fatty acid amide hydrolase (FAAH) knock out mice. Compared to wild type littermate controls, CB1R knock out mice exhibited significantly fewer active responses and earned significantly fewer reinforcers in fixed ratio and progressive ratio schedules. On the other hand, FAAH knock out mice exhibited increased active responses and earned more reinforcers than wild type littermates in fixed ratio but not progressive ratio schedules. These findings support the role of endocannabinoid signaling in motivated behaviors and also expand our understanding of the signaling processes involved in OSS.

Nicole Richardson,  David Roberts (1996)
Drug self-administration studies have recently employed progressive ratio (PR) schedules to examine psychostimulant and opiate reinforcement. This review addresses the technical, statistical, and theoretical issues related to the use of the PR schedule in self-administration studies in rats. Session parameters adopted for use in our laboratory and the considerations relevant to them are described. The strengths and weaknesses of the PR schedule are also discussed.

Andrew H. Lichtman,  M Bracey,  Benjamin Cravatt … (2001)
The medicinal properties of marijuana have been recognized for centuries, but clinical and societal acceptance of this drug of abuse as a potential therapeutic agent remains fiercely debated. An attractive alternative to marijuana-based therapeutics would be to target the molecular pathways that mediate the effects of this drug. To date, these neural signaling pathways have been shown to comprise a cannabinoid receptor (CB(1)) that binds the active constituent of marijuana, tetrahydrocannabinol (THC), and a postulated endogenous CB(1) ligand anandamide. Although anandamide binds and activates the CB(1) receptor in vitro, this compound induces only weak and transient cannabinoid behavioral effects in vivo, possibly a result of its rapid catabolism. Here we show that mice lacking the enzyme fatty acid amide hydrolase (FAAH(-/-)) are severely impaired in their ability to degrade anandamide and when treated with this compound, exhibit an array of intense CB(1)-dependent behavioral responses, including hypomotility, analgesia, catalepsy, and hypothermia. FAAH(-/-)-mice possess 15-fold augmented endogenous brain levels of anandamide and display reduced pain sensation that is reversed by the CB(1) antagonist SR141716A. Collectively, these results indicate that FAAH is a key regulator of anandamide signaling in vivo, setting an endogenous cannabinoid tone that modulates pain perception. FAAH may therefore represent an attractive pharmaceutical target for the treatment of pain and neuropsychiatric disorders.

Cannabinoid receptors in the human brain: a detailed anatomical and quantitative autoradiographic study in the fetal, neonatal and adult human brain.