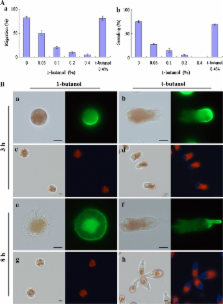 Spatial and temporal regulation of 3-phosphoinositides by PI 3-kinase and PTEN mediates chemotaxis.

Satoru Funamoto, Ruedi Meili, Susan Lee … (2002)
We have investigated the mechanisms of leading edge formation in chemotaxing Dictyostelium cells. We demonstrate that while phosphatidylinositol 3-kinase (PI3K) transiently translocates to the plasma membrane in response to chemoattractant stimulation and to the leading edge in chemotaxing cells, PTEN, a negative regulator of PI3K pathways, exhibits a reciprocal pattern of localization. By uniformly localizing PI3K along the plasma membrane, we show that chemotaxis pathways are activated along the lateral sides of cells and PI3K can initiate pseudopod formation, providing evidence for a direct instructional role of PI3K in leading edge formation. These findings provide evidence that differential subcellular localization and activation of PI3K and PTEN is required for proper chemotaxis.

B Vanhaesebroeck, M Waterfield (1999)
Many signaling pathways converge on and regulate phosphoinositide 3-kinase (PI3K) enzymes whose inositol lipid products are key mediators of intracellular signaling. Different PI3K isoforms generate specific lipids that bind to FYVE and pleckstrin homology (PH) domains in a variety of proteins, affecting their localization, conformation, and activities. Here we review the activation mechanisms of the different types of PI3Ks and their downstream actions, with focus on the PI3Ks that are acutely triggered by extracellular stimulation. Copyright 1999 Academic Press.

This paper is available online free of all access charges (see http://jxb.oxfordjournals.org/open_access.html for further details)