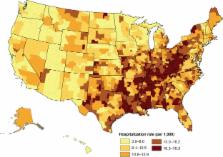 Hospitalizations for persons with chronic obstructive pulmonary disease (COPD) result in significant health care resource use and excess expenditures. Despite well-documented sociodemographic disparities in COPD outcomes, no study has characterized geographic variations in COPD hospitalization across the US.

Om Kurmi,  George W Smith,  Padam Simkhada … (2010)
Over half the world is exposed daily to the smoke from combustion of solid fuels. Chronic obstructive pulmonary disease (COPD) is one of the main contributors to the global burden of disease and can be caused by biomass smoke exposure. However, studies of biomass exposure and COPD show a wide range of effect sizes. The aim of this systematic review was to quantify the impact of biomass smoke on the development of COPD and define reasons for differences in the reported effect sizes. A systematic review was conducted of studies with sufficient statistical power to calculate the health risk of COPD from the use of solid fuel, which followed standardised criteria for the diagnosis of COPD and which dealt with confounding factors. The results were pooled by fuel type and country to produce summary estimates using a random effects model. Publication bias was also estimated. There were positive associations between the use of solid fuels and COPD (OR=2.80, 95% CI 1.85 to 4.0) and chronic bronchitis (OR=2.32, 95% CI 1.92 to 2.80). Pooled estimates for different types of fuel show that exposure to wood smoke while performing domestic work presents a greater risk of development of COPD and chronic bronchitis than other fuels. Despite heterogeneity across the selected studies, exposure to solid fuel smoke is consistently associated with COPD and chronic bronchitis. Efforts should be made to reduce exposure to solid fuel by using either cleaner fuel or relatively cleaner technology while performing domestic work.

Junfeng Zhang,  Kirk Smith (2007)
Objective Nearly all China’s rural residents and a shrinking fraction of urban residents use solid fuels (biomass and coal) for household cooking and/or heating. Consequently, global meta-analyses of epidemiologic studies indicate that indoor air pollution from solid fuel use in China is responsible for approximately 420,000 premature deaths annually, more than the approximately 300,000 attributed to urban outdoor air pollution in the country. Our objective in this review was to help elucidate the extent of this indoor air pollution health hazard. Data sources We reviewed approximately 200 publications in both Chinese- and English-language journals that reported health effects, exposure characteristics, and fuel/stove intervention options. Conclusions Observed health effects include respiratory illnesses, lung cancer, chronic obstructive pulmonary disease, weakening of the immune system, and reduction in lung function. Arsenic poisoning and fluorosis resulting from the use of “poisonous” coal have been observed in certain regions of China. Although attempts have been made in a few studies to identify specific coal smoke constituents responsible for specific adverse health effects, the majority of indoor air measurements include those of only particulate matter, carbon monoxide, sulfur dioxide, and/or nitrogen dioxide. These measurements indicate that pollution levels in households using solid fuel generally exceed China’s indoor air quality standards. Intervention technologies ranging from simply adding a chimney to the more complex modernized bioenergy program are available, but they can be viable only with coordinated support from the government and the commercial sector.

D. Mannino (2002)
COPD continues to cause a heavy health and economic burden both in the United States and around the world. Some of the risk factors for COPD are well-known and include smoking, occupational exposures, air pollution, airway hyperresponsiveness, asthma, and certain genetic variations, although many questions, such as why < 20% of smokers develop significant airway obstruction, remain. Precise definitions of COPD vary and are frequently dependent on an accurate diagnosis of the problem by a physician. These differences in the definition of COPD can have large effects on the estimates of COPD in the population. Furthermore, evidence that COPD represents several different disease processes with potentially different interventions continues to emerge. In most of the world, COPD prevalence and mortality are still increasing and likely will continue to rise in response to increases in smoking, particularly by women and adolescents. Resources aimed at smoking cessation and prevention, COPD education and early detection, and better treatment will be of the most benefit in our continuing efforts against this important cause of morbidity and mortality.