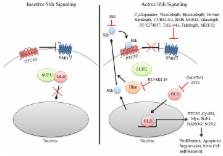 The sonic hedgehog (Shh) signaling pathway is a major regulator of cell differentiation, cell proliferation, and tissue polarity. Aberrant activation of the Shh pathway has been shown in a variety of human cancers, including, basal cell carcinoma, malignant gliomas, medulloblastoma, leukemias, and cancers of the breast, lung, pancreas, and prostate. Tumorigenesis, tumor progression and therapeutic response have all been shown to be impacted by the Shh signaling pathway. Downstream effectors of the Shh pathway include smoothened (SMO) and glioma-associated oncogene homolog (GLI) family of zinc finger transcription factors. Both are regarded as important targets for cancer therapeutics. While most efforts have been devoted towards pharmacologically targeting SMO, developing GLI-targeted approach has its merit because of the fact that GLI proteins can be activated by both Shh ligand-dependent and -independent mechanisms. To date, two SMO inhibitors (LDE225/Sonidegib and GDC-0449/Vismodegib) have received FDA approval for treating basal cell carcinoma while many clinical trials are being conducted to evaluate the efficacy of this exciting class of targeted therapy in a variety of cancers. In this review, we provide an overview of the biology of the Shh pathway and then detail the current landscape of the Shh-SMO-GLI pathway inhibitors including those in preclinical studies and clinical trials.

Armando Santoro,  Luigi Bolondi,  Josep Llovet … (2008)
No effective systemic therapy exists for patients with advanced hepatocellular carcinoma. A preliminary study suggested that sorafenib, an oral multikinase inhibitor of the vascular endothelial growth factor receptor, the platelet-derived growth factor receptor, and Raf may be effective in hepatocellular carcinoma. In this multicenter, phase 3, double-blind, placebo-controlled trial, we randomly assigned 602 patients with advanced hepatocellular carcinoma who had not received previous systemic treatment to receive either sorafenib (at a dose of 400 mg twice daily) or placebo. Primary outcomes were overall survival and the time to symptomatic progression. Secondary outcomes included the time to radiologic progression and safety. At the second planned interim analysis, 321 deaths had occurred, and the study was stopped. Median overall survival was 10.7 months in the sorafenib group and 7.9 months in the placebo group (hazard ratio in the sorafenib group, 0.69; 95% confidence interval, 0.55 to 0.87; P<0.001). There was no significant difference between the two groups in the median time to symptomatic progression (4.1 months vs. 4.9 months, respectively, P=0.77). The median time to radiologic progression was 5.5 months in the sorafenib group and 2.8 months in the placebo group (P<0.001). Seven patients in the sorafenib group (2%) and two patients in the placebo group (1%) had a partial response; no patients had a complete response. Diarrhea, weight loss, hand-foot skin reaction, and hypophosphatemia were more frequent in the sorafenib group. In patients with advanced hepatocellular carcinoma, median survival and the time to radiologic progression were nearly 3 months longer for patients treated with sorafenib than for those given placebo. (ClinicalTrials.gov number, NCT00105443.) 2008 Massachusetts Medical Society

Bernard Escudier,  T Hutson,  Frédéric Rolland … (2007)
We conducted a phase 3, randomized, double-blind, placebo-controlled trial of sorafenib, a multikinase inhibitor of tumor-cell proliferation and angiogenesis, in patients with advanced clear-cell renal-cell carcinoma. From November 2003 to March 2005, we randomly assigned 903 patients with renal-cell carcinoma that was resistant to standard therapy to receive either continuous treatment with oral sorafenib (at a dose of 400 mg twice daily) or placebo; 451 patients received sorafenib and 452 received placebo. The primary end point was overall survival. A single planned analysis of progression-free survival in January 2005 showed a statistically significant benefit of sorafenib over placebo. Consequently, crossover was permitted from placebo to sorafenib, beginning in May 2005. At the January 2005 cutoff, the median progression-free survival was 5.5 months in the sorafenib group and 2.8 months in the placebo group (hazard ratio for disease progression in the sorafenib group, 0.44; 95% confidence interval [CI], 0.35 to 0.55; P<0.01). The first interim analysis of overall survival in May 2005 showed that sorafenib reduced the risk of death, as compared with placebo (hazard ratio, 0.72; 95% CI, 0.54 to 0.94; P=0.02), although this benefit was not statistically significant according to the O'Brien-Fleming threshold. Partial responses were reported as the best response in 10% of patients receiving sorafenib and in 2% of those receiving placebo (P<0.001). Diarrhea, rash, fatigue, and hand-foot skin reactions were the most common adverse events associated with sorafenib. Hypertension and cardiac ischemia were rare serious adverse events that were more common in patients receiving sorafenib than in those receiving placebo. As compared with placebo, treatment with sorafenib prolongs progression-free survival in patients with advanced clear-cell renal-cell carcinoma in whom previous therapy has failed; however, treatment is associated with increased toxic effects. (ClinicalTrials.gov number, NCT00073307 [ClinicalTrials.gov].). Copyright 2007 Massachusetts Medical Society.