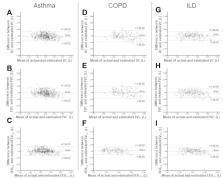 Spirometry is sometimes difficult to perform in elderly patients and patients with cognitive impairment. Forced oscillometry (FOT) is a simple, noninvasive technique used for measuring respiratory impedance. The aim of this study was to develop regression equations to estimate vital capacity (VC), forced vital capacity (FVC), and forced expiratory volume in 1 s (FEV 1.0) on the basis of FOT indices and to evaluate the accuracy of these equations in patients with asthma, chronic obstructive pulmonary disease (COPD), and interstitial lung disease (ILD).

We retrospectively included data on 683 consecutive patients with asthma (388), COPD (128), or ILD (167) in this study. We generated regression equations for VC, FVC, and FEV 1.0 by multivariate linear regression analysis and used them to estimate the corresponding values. We determined whether the estimated data reflected spirometric indices.

These results suggest that our method is not highly accurate. Further studies are needed to generate more accurate regression equations for estimating spirometric indices based on FOT measurements.

C. Scott Bickel,  Jonathan Popler,  Burton Lesnick … (2014)
Simple spirometry and body plethysmography have been routinely used in children aged > 5 years. New techniques based on physiologic concepts that were first described almost 50 years ago are emerging in research and in clinical practice for measuring pulmonary function in children. These techniques have led to an increased understanding of the pediatric lung and respiratory mechanics. Impulse oscillometry (IOS), a simple, noninvasive method using the forced oscillation technique, requires minimal patient cooperation and is suitable for use in both children and adults. This method can be used to assess obstruction in the large and small peripheral airways and has been used to measure bronchodilator response and bronchoprovocation testing. New data suggest that IOS may be useful in predicting loss of asthma control in the pediatric population. This article reviews the clinical applications of IOS, with an emphasis on the pediatric setting, and discusses appropriate coding practices for the clinician.

Reference values for spirometry, including vital capacity, in Japanese adults calculated with the LMS method and compared with previous values.

Ana Maria G T Di Mango,  Paula Silva,  José Jansen … (2006)
The Forced Oscillation Technique (FOT) is a method for non-invasively assessing respiratory mechanics during spontaneous breathing, demanding little cooperation. The aim of this study was to test the ability of FOT to describe the changes in respiratory mechanics in progressive COPD. The study was performed in a control group formed by 21 healthy subjects and 79 outpatients with COPD, which were classified by spirometry, according to the degree of airway obstruction, in mild, moderate and severe groups. Resistive impedance data were submitted to linear regression analysis over the 4-16 Hz frequency range, which yielded the total respiratory system resistance extrapolated at 0 Hz (R0), the respiratory system conductance (Grs), mean respiratory resistance (Rm), and the resistance/frequency slope (S). Reactance data were interpreted using the mean values (Xm) over the 4-32 Hz frequency range, the dynamic compliance (Crs,dyn), the dynamic elastance (E(rs,dyn)), and the resonant frequency (fr) data. Considering the control and mild groups, the increase of airway obstruction resulted in a significant increase of R0 (P<0.008), Rm (P<0.001), and a significant reduction in Grs (P<0.002). Reactive parameters, Crs, dyn and Ers,dyn also presented significant modifications. The subsequent increase (mild to moderate) showed a significant raise of R(0) (P<0.007), S (P<0.001), and a reduction in Grs (P<0.015), while significant increases in Xrs (P<0.001), and Ers,dyn (P<0.02), and also a reduction in Crs, dyn (P<0.02) were also observed. In contrast to earlier stages, in the late stage of the airway obstruction increase (moderate to severe obstruction), resistive parameters did not present statistically significant modifications, while significant modifications were observed in Xrs (P<0.02), Crs, dyn (P<0.003) and Ers,dyn (P<0.003). The results of this study demonstrated that the FOT is useful for detecting the respiratory mechanics modifications in COPD patients. The initial phases of airway obstruction in COPD can be described mainly by resistive parameters, while in more advanced phases, reactive parameters seem to be more useful. Since the FOT has the advantage of being a simple method, such a technique may give a significant clinical contribution, representing an alternative and/or complement to the evaluation of respiratory mechanics by means of forced expiration.