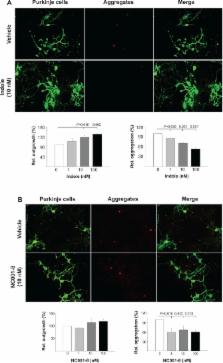 In spinocerebellar ataxia type 17 (SCA17), the expansion of a translated CAG repeat in the TATA box binding protein (TBP) gene results in a long polyglutamine (polyQ) tract in the TBP protein, leading to intracellular accumulation of aggregated TBP and cell death. The molecular chaperones act in preventing protein aggregation to ameliorate downstream harmful events. In this study, we used Tet-On SH-SY5Y cells with inducible SCA17 TBP/Q 79-green fluorescent protein (GFP) expression to test indole and synthetic derivative NC001-8 for neuroprotection. We found that indole and NC001-8 up-regulated chaperone expression to reduce polyQ aggregation in neuronal differentiated TBP/Q 79 cells. The effects on promoting neurite outgrowth and on reduction of aggregation on Purkinje cells were also confirmed with cerebellar primary and slice cultures of SCA17 transgenic mice. Our results demonstrate how indole and derivative NC001-8 reduce polyQ aggregation to support their therapeutic potentials in SCA17 treatment.

D L Ranum,  A Servadio,  Lisa Duvick … (1993)
Spinocerebellar ataxia type 1 (SCA1) is an autosomal dominant disorder characterized by neurodegeneration of the cerebellum, spinal cord and brainstem. A 1.2-Megabase stretch of DNA from the short arm of chromosome 6 containing the SCA1 locus was isolated in a yeast artificial chromosome contig and subcloned into cosmids. A highly polymorphic CAG repeat was identified in this region and was found to be unstable and expanded in individuals with SCA1. There is a direct correlation between the size of the (CAG)n repeat expansion and the age-of-onset of SCA1, with larger alleles occurring in juvenile cases. We also show that the repeat is present in a 10 kilobase mRNA transcript. SCA1 is therefore the fifth genetic disorder to display a mutational mechanism involving an unstable trinucleotide repeat.

Suppression of polyglutamine-mediated neurodegeneration in Drosophila by the molecular chaperone HSP70.

Henry Paulson,  Philip G. Board,  Brandon Warrick … (1999)
At least eight inherited human neurodegenerative diseases are caused by expansion of a polyglutamine domain within the respective proteins. This confers dominant toxicity on the proteins, leading to dysfunction and loss of neurons. Expanded polyglutamine proteins form aggregates, including nuclear inclusions (NI), within neurons, possibly due to misfolding of the proteins. NI are ubiquitinated and sequester molecular chaperone proteins and proteasome components, suggesting that disease pathogenesis includes activation of cellular stress pathways to help refold, disaggregate or degrade the mutant disease proteins. Overexpression of specific chaperone proteins reduces polyglutamine aggregation in transfected cells, but whether this alters toxicity is unknown. Using a Drosophila melanogaster model of polyglutamine disease, we show that directed expression of the molecular chaperone HSP70 suppresses polyglutamine-induced neurodegeneration in vivo. Suppression by HSP70 occurred without a visible effect on NI formation, indicating that polyglutamine toxicity can be dissociated from formation of large aggregates. Our studies indicate that HSP70 or related molecular chaperones may provide a means of treating these and other neurodegenerative diseases associated with abnormal protein conformation and toxicity.

Effects of all-trans-retinoic acid on human SH-SY5Y neuroblastoma as in vitro model in neurotoxicity research.