The Value of Herbarium Collections to the Discovery of Novel Treatments for Alzheimer’s Disease, a Case Made With the Genus Eriodictyon 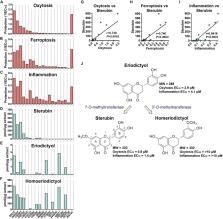 Plants, in particular those with a history in traditional medicine, hold enormous potential as sources of new therapies for dementias such as Alzheimer’s disease (AD). The largest collections of plants can be found in herbaria all over the world, but the value of these collections to AD drug discovery has been significantly neglected. As a proof of principle, we investigated the neuroprotective activity of herbarium specimens of Eriodictyon (yerba santa), a genus with a long history of usage by the indigenous tribes in California to treat respiratory and age-related complications. Dichloromethane extracts were prepared from leaves of 14 Eriodictyon taxa preserved in the SD Herbarium located at the San Diego Natural History Museum. The extracts were tested for neuroprotection in nerve cells against oxytosis and ferroptosis and for anti-inflammatory activity in brain microglial cells exposed to bacterial lipopolysaccharide. In parallel, the levels of the flavanones sterubin, eriodictyol and homoeriodictyol were measured by mass spectrometry. Several Eriodictyon species presented strong neuroprotective and anti-inflammatory activities. The protective properties of the extracts correlated with the amount of sterubin, but not with eriodictyol or homoeriodictyol, indicating that sterubin is the major active compound in these species. The occurrence of eriodictyol and homoeriodictyol may be predictive of the phylogenetic relationship between members in the genus Eriodictyon. The data offer insight into the traditional use of yerba santa across indigenous tribes in California, while demonstrating the value of herbarium collections for the discovery of novel therapeutic compounds for the treatment of neurodegenerative diseases.

A Novel Neurotrophic Drug for Cognitive Enhancement and Alzheimer's Disease

Qi Chen,  Marguerite Prior,  Richard Dargusch … (2011)
Currently, the major drug discovery paradigm for neurodegenerative diseases is based upon high affinity ligands for single disease-specific targets. For Alzheimer's disease (AD), the focus is the amyloid beta peptide (Aß) that mediates familial Alzheimer's disease pathology. However, given that age is the greatest risk factor for AD, we explored an alternative drug discovery scheme that is based upon efficacy in multiple cell culture models of age-associated pathologies rather than exclusively amyloid metabolism. Using this approach, we identified an exceptionally potent, orally active, neurotrophic molecule that facilitates memory in normal rodents, and prevents the loss of synaptic proteins and cognitive decline in a transgenic AD mouse model.

Back to the future with phenotypic screening.

Marguerite Prior,  Chandramouli Chiruta,  Antonio Currais … (2014)
There are no disease-modifying drugs for any old age associated neurodegenerative disease or stroke. This is at least in part due to the failure of drug developers to recognize that the vast majority of neurodegenerative diseases arise from a confluence of multiple toxic insults that accumulate during normal aging and interact with genetic and environmental risk factors. Thus, it is unlikely that the current single target approach based upon rare dominant mutations or even a few preselected targets is going to yield useful drugs for these conditions. Therefore, the identification of drug candidates for neurodegeneration should be based upon their efficacy in phenotypic screening assays that reflect the biology of the aging brain, not a single, preselected target. It is argued here that this approach to drug discovery is the most likely to produce safe and effective drugs for neurodegenerative diseases.

Purification and identification of naringenin 7-O-methyltransferase, a key enzyme in biosynthesis of flavonoid phytoalexin sakuranetin in rice.

Takafumi Shimizu,  Kazunori Okada,  Morifumi Hasegawa … (2012)
Sakuranetin, the major flavonoid phytoalexin in rice, is induced by ultraviolet (UV) irradiation, CuCl(2) treatment, jasmonic acid treatment, and infection by phytopathogens. It was recently demonstrated that sakuranetin has anti-inflammatory activity, anti-mutagenic activity, anti-pathogenic activities against Helicobacter pylori, Leishmania, and Trypanosoma and contributes to the maintenance of glucose homeostasis in animals. Thus, sakuranetin is a useful compound as a plant antibiotic and a potential pharmaceutical agent. Sakuranetin is biosynthesized from naringenin by naringenin 7-O-methyltransferase (NOMT). In previous research, rice NOMT (OsNOMT) was purified to apparent homogeneity from UV-treated wild-type rice leaves, but the purified protein, named OsCOMT1, exhibited caffeic acid O-methyltransferase (COMT) activity and not NOMT activity. In this study, we found that OsCOMT1 does not contribute to sakuranetin production in rice in vivo, and we purified OsNOMT using the oscomt1 mutant. A crude protein preparation from UV-treated oscomt1 leaves was subjected to three sequential purification steps, resulting in a 400-fold purification from the crude enzyme preparation. Using SDS-PAGE, the purest enzyme preparation showed a minor band at an apparent molecular mass of 40 kDa. Two O-methyltransferase-like proteins, encoded by Os04g0175900 and Os12g0240900, were identified from the 40-kDa band by MALDI-TOF/TOF analysis. Recombinant Os12g0240900 protein showed NOMT activity, but the recombinant Os04g0175900 protein did not. Os12g0240900 expression was induced by jasmonic acid treatment in rice leaves prior to sakuranetin accumulation, and the Os12g0240900 protein showed reasonable kinetic properties to OsNOMT. On the basis of these results, we conclude that Os12g0240900 encodes an OsNOMT.