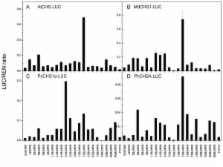 We give an example of expression of heme-thiolate P450 to demonstrate effectiveness of this system. We have also designed vectors that take advantage of a dual luciferase assay system to analyse promoter sequences or post-transcriptional regulation of gene expression. We have demonstrated their utility by co-expression of putative transcription factors and the promoter sequence of potential target genes and show how orthologous promoter sequences respond to these genes. Finally, we have constructed a vector that has allowed us to investigate design features of hairpin constructs related to their ability to initiate RNA silencing, and have used these tools to study cis-regulatory effect of intron-containing gene constructs.

In developing a series of vectors ideally suited to transient expression analysis we have provided a resource that further advances the application of this technology. These minimal vectors are ideally suited to conventional cloning methods and we have used them to demonstrate their flexibility to investigate enzyme activity, transcription regulation and post-transcriptional regulatory processes in transient assays.

An enhanced transient expression system in plants based on suppression of gene silencing by the p19 protein of tomato bushy stunt virus.

Pere Mestre,  David Baulcombe,  Susana Rivas … (2003)
Transient gene expression is a fast, flexible and reproducible approach to high-level expression of useful proteins. In plants, recombinant strains of Agrobacterium tumefaciens can be used for transient expression of genes that have been inserted into the T-DNA region of the bacterial Ti plasmid. A bacterial culture is vacuum-infiltrated into leaves, and upon T-DNA transfer, there is ectopic expression of the gene of interest in the plant cells. However, the utility of the system is limited because the ectopic protein expression ceases after 2-3 days. Here, we show that post-transcriptional gene silencing (PTGS) is a major cause for this lack of efficiency. We describe a system based on co-expression of a viral-encoded suppressor of gene silencing, the p19 protein of tomato bushy stunt virus (TBSV), that prevents the onset of PTGS in the infiltrated tissues and allows high level of transient expression. Expression of a range of proteins was enhanced 50-folds or more in the presence of p19 so that protein purification could be achieved from as little as 100 mg of infiltrated leaf material. The effect of p19 was not saturated in cells that had received up to four individual T-DNAs and persisted until leaf senescence. Because of its simplicity and rapidity, we anticipate that the p19-enhanced expression system will have value in industrial production as well as a research tool for isolation and biochemical characterisation of a broad range of proteins without the need for the time-consuming regeneration of stably transformed plants.

S. Varsha Wesley,  Christopher A. Helliwell,  Neil A Smith … (2001)
Post-transcriptional silencing of plant genes using anti-sense or co-suppression constructs usually results in only a modest proportion of silenced individuals. Recent work has demonstrated the potential for constructs encoding self-complementary 'hairpin' RNA (hpRNA) to efficiently silence genes. In this study we examine design rules for efficient gene silencing, in terms of both the proportion of independent transgenic plants showing silencing, and the degree of silencing. Using hpRNA constructs containing sense/anti-sense arms ranging from 98 to 853 nt gave efficient silencing in a wide range of plant species, and inclusion of an intron in these constructs had a consistently enhancing effect. Intron-containing constructs (ihpRNA) generally gave 90-100% of independent transgenic plants showing silencing. The degree of silencing with these constructs was much greater than that obtained using either co-suppression or anti-sense constructs. We have made a generic vector, pHANNIBAL, that allows a simple, single PCR product from a gene of interest to be easily converted into a highly effective ihpRNA silencing construct. We have also created a high-throughput vector, pHELLSGATE, that should facilitate the cloning of gene libraries or large numbers of defined genes, such as those in EST collections, using an in vitro recombinase system. This system may facilitate the large-scale determination and discovery of plant gene functions in the same way as RNAi is being used to examine gene function in Caenorhabditis elegans.