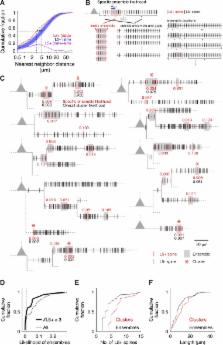 The spatial organization of synaptic inputs on the dendritic tree of cortical neurons plays a major role for dendritic integration and neural computations, yet, remarkably little is known about it. We mapped the spatial organization of glutamatergic synapses between layer 5 pyramidal cells by combining optogenetics and 2-photon calcium imaging in mouse neocortical slices. To mathematically characterize the organization of inputs we developed an approach based on combinatorial analysis of the likelihoods of specific synapse arrangements. We found that the synapses of intralaminar inputs form clusters on the basal dendrites of layer 5 pyramidal cells. These clusters contain 4 to 14 synapses within ≤30 µm of dendrite. According to the spatiotemporal characteristics of synaptic summation, these numbers suggest that there will be non-linear dendritic integration of synaptic inputs during synchronous activation.

Neurons in the brain exchange information through points of contact called synapses. If electrical activity arriving at a number of synapses exceeds a certain threshold, it can trigger an electrical impulse, which is transmitted to the next neuron. Synapses generally connect with branch-like structures called dendrites on the receiving neuron. However, little is known about how synapses are arranged on dendrites.

Gökçe et al. have now used a technique called optogenetics to work out the exact arrangement of a type of synapse on neurons in a part of the mouse brain that is devoted to vision. Optogenetics takes advantage of light-activated proteins that can trigger electrical activity. Gökçe et al. used mice that had been genetically engineered to produce these proteins in specific neurons, and then deliberately triggered electrical activity simply by shining light on these neurons. The experiments also used another technique called two-photon calcium imaging to monitor the activity of single synapses in response to the electrical activity triggered by optogenetics.

Gökçe et al. found that these neurons have clusters of four to fourteen synapses within a space of 30 micrometers along a dendrite. Synapses in clusters that are active at the same time can interact and thereby generate electrical signals more effectively than synapses spread across the dendrites. Further experiments are now needed to map the synapses between other kinds of neurons, and to map synapses from two different inputs at the same time.

Physiology and anatomy of synaptic connections between thick tufted pyramidal neurones in the developing rat neocortex.

Bert Sakmann,  Joachim Lübke,  H. Markram … (1997)
1. Dual voltage recordings were made from pairs of adjacent, synaptically connected thick tufted layer 5 pyramidal neurones in brain slices of young rat (14-16 days) somatosensory cortex to examine the physiological properties of unitary EPSPs. Pre- and postsynaptic neurones were filled with biocytin and examined in the light and electron microscope to quantify the morphology of axonal and dendritic arbors and the number and location of synaptic contacts on the target neurone. 2. In 138 synaptic connections between pairs of pyramidal neurones 96 (70%) were unidirectional and 42 (30%) were bidirectional. The probability of finding a synaptic connection in dual recordings was 0.1. Unitary EPSPs evoked by a single presynaptic action potential (AP) had a mean peak amplitude ranging from 0.15 to 5.5 mV in different connections with a mean of 1.3 +/- 1.1 mV, a latency of 1.7 +/- 0.9 ms, a 20-80% rise time of 2.9 +/- 2.3 ms and a decay time constant of 40 +/- 18 ms at 32-24 degrees C and -60 +/- 2 mV membrane potential. 3. Peak amplitudes of unitary EPSPs fluctuated randomly from trial to trial. The coefficient of variation (c.v.) of the unitary EPSP amplitudes ranged from 0.13 to 2.8 in different synaptic connections (mean, 0.52; median, 0.41). The percentage of failures of single APs to evoke a unitary EPSP ranged from 0 to 73% (mean, 14%; median, 7%). Both c.v. and percentage of failures decreased with increasing mean EPSP amplitude. 4. Postsynaptic glutamate receptors which mediate unitary EPSPs at -60 mV were predominantly of the L-alpha-amino-3-hydroxy-5-methyl-4-isoxazolepropionate (AMPA) receptor type. Receptors of the N-methyl-D-aspartate (NMDA) type contributed only a small fraction (< 20%) to the voltage-time integral of the unitary EPSP at -60 mV, but their contribution increased at more positive membrane potentials. 5. Branching patterns of dendrites and axon collaterals of forty-five synaptically connected neurones, when examined in the light microscope, indicated that the axonal and dendritic anatomy of both projecting and target neurones and of uni- and bidirectionally connected neurones was uniform. 6. The number of potential synaptic contacts formed by a presynaptic neurone on a target neurone varied between four and eight (mean, 5.5 +/- 1.1 contacts; n = 19 connections). Synaptic contacts were preferentially located on basal dendrites (63%, 82 +/- 35 microns from the soma, n = 67) and apical oblique dendrites (27%, 145 +/- 59 microns, n = 29), and 35% of all contacts were located on tertiary basal dendritic branches. The mean geometric distances (from the soma) of the contacts of a connection varied between 80 and 585 microns (mean, 147 microns; median, 105 microns). The correlation between EPSP amplitude and the number of morphologically determined synaptic contacts or the mean geometric distances from the soma was only weak (correlation coefficients were 0.2 and 0.26, respectively). 7. Compartmental models constructed from camera lucida drawings of eight target neurones showed that synaptic contacts were located at mean electrotonic distances between 0.07 and 0.33 from the soma (mean, 0.13). Simulations of unitary EPSPs, assuming quantal conductance changes with fast rise time and short duration, indicated that amplitudes of quantal EPSPs at the soma were attenuated, on average, to < 10% of dendritic EPSPs and varied in amplitude up to 10-fold depending on the dendritic location of synaptic contacts. The inferred quantal peak conductance increase varied between 1.5 and 5.5 nS (mean, 3 nS). 8. The combined physiological and morphological measurements in conjunction with EPSP simulations indicated that the 20-fold range in efficacy of the synaptic connections between thick tufted pyramidal neurones, which have their synaptic contacts preferentially located on basal and apical oblique dendrites, was due to differences in transmitter release probability of the projecting neurones and, to a lesser extent, to differenc

Benjamin J. Schiller,  Bartlett W. Mel,  Alon Poleg-Polsky (2004)
The thin basal and oblique dendrites of cortical pyramidal neurons receive most of the synaptic inputs from other cells, but their integrative properties remain uncertain. Previous studies have most often reported global linear or sublinear summation. An alternative view, supported by biophysical modeling studies, holds that thin dendrites provide a layer of independent computational 'subunits' that sigmoidally modulate their inputs prior to global summation. To distinguish these possibilities, we combined confocal imaging and dual-site focal synaptic stimulation of identified thin dendrites in rat neocortical pyramidal neurons. We found that nearby inputs on the same branch summed sigmoidally, whereas widely separated inputs or inputs to different branches summed linearly. This strong spatial compartmentalization effect is incompatible with a global summation rule and provides the first experimental support for a two-layer 'neural network' model of pyramidal neuron thin-branch integration. Our findings could have important implications for the computing and memory-related functions of cortical tissue.

Dendritic organization of sensory input to cortical neurons in vivo.

H-T Jia,  Arthur Konnerth,  Xiaowei Chen … (2010)
In sensory cortex regions, neurons are tuned to specific stimulus features. For example, in the visual cortex, many neurons fire predominantly in response to moving objects of a preferred orientation. However, the characteristics of the synaptic input that cortical neurons receive to generate their output firing pattern remain unclear. Here we report a novel approach for the visualization and functional mapping of sensory inputs to the dendrites of cortical neurons in vivo. By combining high-speed two-photon imaging with electrophysiological recordings, we identify local subthreshold calcium signals that correspond to orientation-specific synaptic inputs. We find that even inputs that share the same orientation preference are widely distributed throughout the dendritic tree. At the same time, inputs of different orientation preference are interspersed, so that adjacent dendritic segments are tuned to distinct orientations. Thus, orientation-tuned neurons can compute their characteristic firing pattern by integrating spatially distributed synaptic inputs coding for multiple stimulus orientations.