Origin and diversification of living cycads: a cautionary tale on the impact of the branching process prior in Bayesian molecular dating 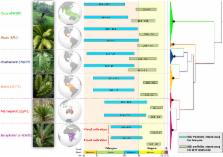 Bayesian relaxed-clock dating has significantly influenced our understanding of the timeline of biotic evolution. This approach requires the use of priors on the branching process, yet little is known about their impact on divergence time estimates. We investigated the effect of branching priors using the iconic cycads. We conducted phylogenetic estimations for 237 cycad species using three genes and two calibration strategies incorporating up to six fossil constraints to (i) test the impact of two different branching process priors on age estimates, (ii) assess which branching prior better fits the data, (iii) investigate branching prior impacts on diversification analyses, and (iv) provide insights into the diversification history of cycads.

These results suggest the choice of the branching process prior can have a drastic influence on our understanding of evolutionary radiations. Therefore, all dating analyses must involve a model selection process using Bayes factors to select between a Yule or birth-death prior, in particular on ancient clades with a potential pattern of high extinction. We also provide new insights into the history of cycad diversification because we found (i) periods of extinction along the long branches of the genera consistent with fossil data, and (ii) high diversification rates within the Miocene genus radiations.

A Total-Evidence Approach to Dating with Fossils, Applied to the Early Radiation of the Hymenoptera

Fredrik Ronquist,  Seraina Klopfstein,  Lars Vilhelmsen … (2012)
Phylogenies are usually dated by calibrating interior nodes against the fossil record. This relies on indirect methods that, in the worst case, misrepresent the fossil information. Here, we contrast such node dating with an approach that includes fossils along with the extant taxa in a Bayesian total-evidence analysis. As a test case, we focus on the early radiation of the Hymenoptera, mostly documented by poorly preserved impression fossils that are difficult to place phylogenetically. Specifically, we compare node dating using nine calibration points derived from the fossil record with total-evidence dating based on 343 morphological characters scored for 45 fossil (4--20 complete) and 68 extant taxa. In both cases we use molecular data from seven markers (∼5 kb) for the extant taxa. Because it is difficult to model speciation, extinction, sampling, and fossil preservation realistically, we develop a simple uniform prior for clock trees with fossils, and we use relaxed clock models to accommodate rate variation across the tree. Despite considerable uncertainty in the placement of most fossils, we find that they contribute significantly to the estimation of divergence times in the total-evidence analysis. In particular, the posterior distributions on divergence times are less sensitive to prior assumptions and tend to be more precise than in node dating. The total-evidence analysis also shows that four of the seven Hymenoptera calibration points used in node dating are likely to be based on erroneous or doubtful assumptions about the fossil placement. With respect to the early radiation of Hymenoptera, our results suggest that the crown group dates back to the Carboniferous, ∼309 Ma (95% interval: 291--347 Ma), and diversified into major extant lineages much earlier than previously thought, well before the Triassic. [Bayesian inference; fossil dating; morphological evolution; relaxed clock; statistical phylogenetics.]

Bruce Rannala,  Ziheng Yang (2005)
We implement a Bayesian Markov chain Monte Carlo algorithm for estimating species divergence times that uses heterogeneous data from multiple gene loci and accommodates multiple fossil calibration nodes. A birth-death process with species sampling is used to specify a prior for divergence times, which allows easy assessment of the effects of that prior on posterior time estimates. We propose a new approach for specifying calibration points on the phylogeny, which allows the use of arbitrary and flexible statistical distributions to describe uncertainties in fossil dates. In particular, we use soft bounds, so that the probability that the true divergence time is outside the bounds is small but nonzero. A strict molecular clock is assumed in the current implementation, although this assumption may be relaxed. We apply our new algorithm to two data sets concerning divergences of several primate species, to examine the effects of the substitution model and of the prior for divergence times on Bayesian time estimation. We also conduct computer simulation to examine the differences between soft and hard bounds. We demonstrate that divergence time estimation is intrinsically hampered by uncertainties in fossil calibrations, and the error in Bayesian time estimates will not go to zero with increased amounts of sequence data. Our analyses of both real and simulated data demonstrate potentially large differences between divergence time estimates obtained using soft versus hard bounds and a general superiority of soft bounds. Our main findings are as follows. (1) When the fossils are consistent with each other and with the molecular data, and the posterior time estimates are well within the prior bounds, soft and hard bounds produce similar results. (2) When the fossils are in conflict with each other or with the molecules, soft and hard bounds behave very differently; soft bounds allow sequence data to correct poor calibrations, while poor hard bounds are impossible to overcome by any amount of data. (3) Soft bounds eliminate the need for "safe" but unrealistically high upper bounds, which may bias posterior time estimates. (4) Soft bounds allow more reliable assessment of estimation errors, while hard bounds generate misleadingly high precisions when fossils and molecules are in conflict.