Macrophages in Tumor Microenvironments and the Progression of Tumors 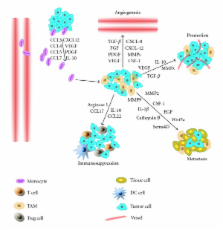 Macrophages are widely distributed innate immune cells that play indispensable roles in the innate and adaptive immune response to pathogens and in-tissue homeostasis. Macrophages can be activated by a variety of stimuli and polarized to functionally different phenotypes. Two distinct subsets of macrophages have been proposed, including classically activated (M1) and alternatively activated (M2) macrophages. M1 macrophages express a series of proinflammatory cytokines, chemokines, and effector molecules, such as IL-12, IL-23, TNF- α , iNOS and MHCI/II. In contrast, M2 macrophages express a wide array of anti-inflammatory molecules, such as IL-10, TGF- β , and arginase1. In most tumors, the infiltrated macrophages are considered to be of the M2 phenotype, which provides an immunosuppressive microenvironment for tumor growth. Furthermore, tumor-associated macrophages secrete many cytokines, chemokines, and proteases, which promote tumor angiogenesis, growth, metastasis, and immunosuppression. Recently, it was also found that tumor-associated macrophages interact with cancer stem cells. This interaction leads to tumorigenesis, metastasis, and drug resistance. So mediating macrophage to resist tumors is considered to be potential therapy.

Luther Pollard,  Edwin Lewis (2006)
Macrophages are prominent in the stromal compartment of virtually all types of malignancy. These highly versatile cells respond to the presence of stimuli in different parts of tumors with the release of a distinct repertoire of growth factors, cytokines, chemokines, and enzymes that regulate tumor growth, angiogenesis, invasion, and/or metastasis. The distinct microenvironments where tumor-associated macrophages (TAM) act include areas of invasion where TAMs promote cancer cell motility, stromal and perivascular areas where TAMs promote metastasis, and avascular and perinecrotic areas where hypoxic TAMs stimulate angiogenesis. This review will discuss the evidence for differential regulation of TAMs in these microenvironments and provide an overview of current attempts to target or use TAMs for therapeutic purposes.

Nigel Mackman,  Rafal Pawlinski,  Volker H. Haase … (2003)
Granulocytes and monocytes/macrophages of the myeloid lineage are the chief cellular agents of innate immunity. Here, we have examined the inflammatory response in mice with conditional knockouts of the hypoxia responsive transcription factor HIF-1alpha, its negative regulator VHL, and a known downstream target, VEGF. We find that activation of HIF-1alpha is essential for myeloid cell infiltration and activation in vivo through a mechanism independent of VEGF. Loss of VHL leads to a large increase in acute inflammatory responses. Our results show that HIF-1alpha is essential for the regulation of glycolytic capacity in myeloid cells: when HIF-1alpha is absent, the cellular ATP pool is drastically reduced. The metabolic defect results in profound impairment of myeloid cell aggregation, motility, invasiveness, and bacterial killing. This role for HIF-1alpha demonstrates its direct regulation of survival and function in the inflammatory microenvironment.

Macrophages regulate the angiogenic switch in a mouse model of breast cancer.

Leoid Gnatovskiy,  Feng Li,  Liyin Zhu … (2006)
The development of a tumor vasculature or access to the host vasculature is a crucial step for the survival and metastasis of malignant tumors. Although therapeutic strategies attempting to inhibit this step during tumor development are being developed, the biological regulation of this process is still largely unknown. Using a transgenic mouse susceptible to mammary cancer, PyMT mice, we have characterized the development of the vasculature in mammary tumors during their progression to malignancy. We show that the onset of the angiogenic switch, identified as the formation of a high-density vessel network, is closely associated with the transition to malignancy. More importantly, both the angiogenic switch and the progression to malignancy are regulated by infiltrated macrophages in the primary mammary tumors. Inhibition of the macrophage infiltration into the tumor delayed the angiogenic switch and malignant transition whereas genetic restoration of the macrophage population specifically in these tumors rescued the vessel phenotype. Furthermore, premature induction of macrophage infiltration into premalignant lesions promoted an early onset of the angiogenic switch independent of tumor progression. Taken together, this study shows that tumor-associated macrophages play a key role in promoting tumor angiogenesis, an essential step in the tumor progression to malignancy.