Normative Values for Colonic Transit Time and Patient Assessment of Constipation in Adults With Functional Constipation: Systematic Review With Meta-Analysis 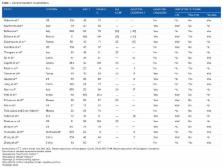 Improved tests for a random effects meta-regression with a single covariate.

Guido Knapp,  J Hartung (2003)
The explanation of heterogeneity plays an important role in meta-analysis. The random effects meta-regression model allows the inclusion of trial-specific covariates which may explain a part of the heterogeneity. We examine the commonly used tests on the parameters in the random effects meta-regression with one covariate and propose some new test statistics based on an improved estimator of the variance of the parameter estimates. The approximation of the distribution of the newly proposed tests is based on some theoretical considerations. Moreover, the newly proposed tests can easily be extended to the case of more than one covariate. In a simulation study, we compare the tests with regard to their actual significance level and we consider the log relative risk as the parameter of interest. Our simulation study reflects the meta-analysis of the efficacy of a vaccine for the prevention of tuberculosis originally discussed in Berkey et al. The simulation study shows that the newly proposed tests are superior to the commonly used test in holding the nominal significance level. Copyright 2003 John Wiley & Sons, Ltd.

Systematic review: impact of constipation on quality of life in adults and children.

M Geraint,  D Candy,  J Belsey … (2010)
Comparison of quality of life (QoL) across disease areas requires the use of appropriate tools. Although many studies have investigated QoL in constipation, most used disease-specific tools that are inappropriate for cross-comparisons. To identify studies of QoL in constipation and to compare these results with other chronic conditions. A comprehensive literature search identified studies in constipation that used a generic QoL tool. Results were statistically pooled where possible and compared with published results using the same tools in other chronic conditions. A total of 13 qualifying studies were identified, 10 in adults and three in children. Results from eight studies using the SF-36/12 tools were pooled; the remaining five were narratively reported. Mental and physical components of QoL scores were consistently impaired in both adult and child populations, with the greatest impact being seen in secondary care studies. Mental health effects predominated over physical domains. The magnitude of impact was comparable with that seen in patients with allergies, musculoskeletal conditions and inflammatory bowel disease. The impact of constipation on QoL is significant and comparable with other common chronic conditions. Improving management may prove to be an effective way of improving QoL for a substantial number of patients.

Ginger Metcalf,  Alan R Zinsmeister,  Robert Phillips … (1986)
Transit times of radiopaque markers through the human gut were measured by published techniques and compared with a simplified method. Three sets of distinctive markers were ingested by 24 healthy persons on 3 successive days. In the first part of the study, daily abdominal x-rays were taken and individual stools were collected for radiography. Mouth-to-anus transits were assessed from the fecal output of markers and mean colonic and segmental colonic transits were calculated from the daily radiographs. These established methods were then compared with estimates of total colonic and segmental transits based on a single abdominal film, taken on the fourth day. The single-film technique correlated well with values obtained from the previous, but more inconvenient, methods. Using the simpler approach, colonic transit was assessed in 49 additional healthy subjects, for a total group of 73. Total colonic transit was 35.0 +/- 2.1 h (mean +/- SE); segmental transits was 11.3 +/- 1.1 h for the right colon, 11.4 +/- 1.4 h for the left colon, and 12.4 +/- 1.1 h for the rectosigmoid. Men had significantly shorter transits for the whole colon than did women (p less than 0.05), and this difference was apparent to some extent in the right (p = 0.06) and left colon (p = 0.07) but not in the rectosigmoid. Age did not influence transit significantly nor did a small dose of supplemental fiber. The technique is simple, convenient for clinical usage, and reduces the exposure to radiation to acceptable levels. There should be a role for this approach in the evaluation of colonic transit in selected patients.