Network Analysis of the Systemic Response to Fasciola hepatica Infection in Sheep Reveals Changes in Fibrosis, Apoptosis, Toll-Like Receptors 3/4, and B Cell Function 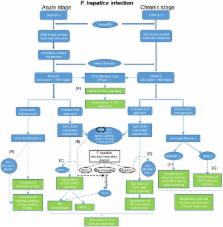 The Trematode Fasciola hepatica is an important cause of disease in livestock and in man. Modulation of immunity is a critical strategy used by this parasite to facilitate its long-term survival in the host. Understanding the underlying mechanisms at a system level is important for the development of novel control strategies, such as vaccination, as well as for increasing general understanding of helminth-mediated immunoregulation and its consequences. Our previous RNA sequencing work identified a large number of differentially expressed genes (DEG) from ovine peripheral blood mononuclear cells (PBMCs) at acute and chronic stages of F. hepatica infection, and yielded important information on host–parasite interaction, with particular reference to the immune response. To extend our understanding of the immunoregulatory effects of this parasite, we employed InnateDB to further analyze the DEG dataset and identified 2,458 and 224 molecular interactions in the context of innate immunity from the acute and chronic stages of infection, respectively. Notably, 458 interactions at the acute stage of infection were manually curated from studies involving PBMC-related cell-types, which guaranteed confident hypothesis generation. NetworkAnalyst was subsequently used to construct and visualize molecular networks. Two complementary strategies (function-first and connection-first) were conducted to interpret the networks. The function-first approach highlighted subnetworks implicated in regulation of Toll-like receptor 3/4 signaling in both acute and chronic infections. The connection-first approach highlighted regulation of intrinsic apoptosis and B-cell receptor-signaling during acute and chronic infections, respectively. To the best of our knowledge, this study is the first system level analysis of the regulation of host innate immunity during F. hepatica infection. It provides insights into the profound changes induced by F. hepatica infection that not only favors parasite survival into chronic infection but also impedes the host’s immune response to other pathogens, and render vaccination against fasciolosis a difficult challenge. The information provided will be useful in the design of specific vaccine protocols to overcome parasite-mediated immunoregulation and in furthering general understanding of the interplay between helminth infection and host immune systems.

Kazuyoshi Takeda,  S Akira,  T Kaisho (2001)
Recognition of pathogens is mediated by a set of germline-encoded receptors that are referred to as pattern-recognition receptors (PRRs). These receptors recognize conserved molecular patterns (pathogen-associated molecular patterns), which are shared by large groups of microorganisms. Toll-like receptors (TLRs) function as the PRRs in mammals and play an essential role in the recognition of microbial components. The TLRs may also recognize endogenous ligands induced during the inflammatory response. Similar cytoplasmic domains allow TLRs to use the same signaling molecules used by the interleukin 1 receptors (IL-1Rs): these include MyD88, IL-1R--associated protein kinase and tumor necrosis factor receptor--activated factor 6. However, evidence is accumulating that the signaling pathways associated with each TLR are not identical and may, therefore, result in different biological responses.

MD-2, a Molecule that Confers Lipopolysaccharide Responsiveness on Toll-like Receptor 4

Rintaro Shimazu,  Sachiko Akashi-Takamura,  Hirotaka Ogata … (1999)
Toll-like receptor 4 (TLR4) is a mammalian homologue of Drosophila Toll, a leucine-rich repeat molecule that can trigger innate responses against pathogens. The TLR4 gene has recently been shown to be mutated in C3H/HeJ and C57BL/10ScCr mice, both of which are low responders to lipopolysaccharide (LPS). TLR4 may be a long-sought receptor for LPS. However, transfection of TLR4 does not confer LPS responsiveness on a recipient cell line, suggesting a requirement for an additional molecule. Here, we report that a novel molecule, MD-2, is requisite for LPS signaling of TLR4. MD-2 is physically associated with TLR4 on the cell surface and confers responsiveness to LPS. MD-2 is thus a link between TLR4 and LPS signaling. Identification of this new receptor complex has potential implications for understanding host defense, as well as pathophysiologic, mechanisms.