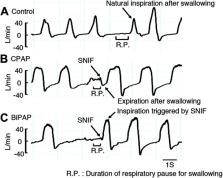 As shown in our previous study, inspiration after swallowing (SW-I) increases during the bi-level positive airway pressure ventilation (BiPAP) in healthy subjects because swallowing-associated non-inspiratory flow (SNIF) triggers inspiratory support, while SW-I during continuous positive pressure ventilation (CPAP) is rare. In the present study, we evaluated the coordination between breathing and swallowing during spontaneous breathing, BiPAP, and CPAP in patients with chronic obstructive pulmonary disease (COPD).

The expiration after swallowing (SW-E) frequency was associated with the occurrence of SNIF ( p<0.01), pause duration ≤0.8 s ( p<0.01), and timing of swallowing at the intermediate respiratory phase (50–80% of the respiratory cycle from the onset of inspiration) ( p<0.01). In particular, the occurrence of SNIF most substantially affected the SW-E frequency. The SW-I frequencies under the control, CPAP, and BiPAP conditions were 35.0%, 3.0%, and 37.7%, respectively. The pause durations were shorter during CPAP and BiPAP than under the control condition ( p<0.01). During CPAP, the occurrence rates of SW-E. Residual denotes the percentage difference between observed and expected values (residual =10.8: p<0.01) and SNIF (residual =9.1: p<0.01) were significantly increased, and timing of swallowing shifted toward the intermediate respiratory phase (residual=3.5: p<0.01).

CPAP decreases the SW-I frequency, increases the SNIF occurrence, and normalizes the timing of swallowing, all of which suggest that CPAP alleviates the risk of aspiration in patients with COPD.

C Poppel,  P F Nassab,  Jill Gilbert … (1995)
1. Relationships between the timing of respiration and deglutition were studied in thirty awake healthy subjects at rest. Deglutition was monitored by submental electromyography, pharyngeal manometry and videofluoroscopy. Respiration was recorded by measurement of oronasal airflow and chest wall movement. Three types of deglutition were studied: injected bolus swallows, spontaneous swallows, and visually cued swallows of boluses previously placed in the mouth. 2. The effect of each swallow on respiratory rhythm was characterized by measurement of cophase, defined as the interval between the onset of deglutitive submental EMG activity to the onset of subsequent rescheduled inspirations. Cophase was determined for swallows initiated at different phases of the respiratory cycle. In all subjects deglutition caused phase resetting of respiratory rhythm. Cophase was largest for swallows initiated near the the inspiratory-expiratory (E-I) transition and smallest for swallows initiated near the expiratory-inspiratory (E-I) transition. The pattern of respiratory resetting by deglutition was topologically classified as type 0. This pattern was shown for swallows induced by bolus injection or visual cue, and for spontaneous swallows. 3. The incidence of spontaneous deglutition was influenced by the position of the swallow in the respiratory cycle. Few spontaneous swallows were initiated near the E-I transition whereas most occurred from late inspiration to mid-expiration. 4. Deglutition caused an abrupt decrease in airflow leading to an interval of apnoea, followed by a period of expiration. The duration of deglutition apnoea for spontaneous swallows was shorter than that for 5 ml bolus swallows, and was unaffected by the respiratory phase of swallow initiation. The period of expiration after swallowing was longest for swallows initiated at the I-E transition, and shortest for E-I swallows. 5. The intervals between bolus injection and the onset of deglutition apnoea, and the timing of swallowing events, were not significantly altered by the phase in the respiratory cycle at which swallowing was exhibited. 6. To quantify the relationship between bolus flow and respiration, we determined the latencies between cessation of inspiratory airflow and arrival of the bolus at the larynx (alpha), and between laryngeal bolus departure and resumption of inspiratory airflow (delta). Both values were dependent upon the respiratory phase of swallowing. The lowest values for alpha and delta were found for early-inspiratory and late-expiratory swallows, respectively. 7. We conclude that swallowing causes respiratory phase resetting with a pattern that is characteristic of the strong perturbations of an attractor-cycle oscillator.(ABSTRACT TRUNCATED AT 400 WORDS)

The coordination of breathing and swallowing in Parkinson's disease.

Lesley Atwood,  Sean Doyle,  Anita R Gross … (2008)
Multiple investigations have determined that healthy adults swallow most often during exhalation and that exhalation regularly follows the swallow, even when a swallow occurs during inhalation. We hypothesized that persons with idiopathic Parkinson's disease would demonstrate impaired breathing and swallowing coordination during spontaneous eating. Twenty-five healthy volunteers and 25 Parkinson's disease patients spontaneously swallowed calibrated pudding and cookie portions while simultaneous nasal airflow and respiratory inductance plethysmography were used to track spontaneous breathing. Surface EMG was used to record the timing of each swallow within the respiratory cycle. When compared to the healthy control group, those with Parkinson's disease swallowed significantly more often during inhalation and at low tidal volumes. The Parkinson's participants also exhibited significantly more postswallow inhalation for both consistencies. Only the healthy subjects exhibited significantly longer deglutitive apnea when swallows that occurred during inhalation were compared with those that occurred during exhalation. The high incidence of oropharyngeal dysphagia and risk of aspiration pneumonia found in Parkinson's disease patients may be partially attributable to impaired coordination of breathing and swallowing.

Richard P. Haslam,  C. Baker,  B Randle … (1999)
Acute respiratory distress syndrome (ARDS) develops in association with many serious medical disorders. Mortality is at least 40%, and there is no specific therapy. A massive influx of activated neutrophils, which damage pulmonary vascular endothelium and alveolar epithelium, leads to alveolar oedema and pulmonary surfactant dysfunction. In-vitro studies show that neutrophil elastase can cleave surfactant-specific proteins and impair surfactant function. If this happens in vivo in ARDS, the response to surfactant therapy will be limited. Samples of pulmonary surfactant were obtained from the lungs of 18 patients with ARDS and six healthy controls by bronchoalveolar lavage. We separated proteins in these samples according to molecular weight by sodium dodecyl sulphate polyacrylamide gel electrophoresis (SDS-PAGE). We then used western blotting with monoclonal antibody E8 to detect the major surfactant-specific protein A (SP-A). By contrast with controls, 14 of 18 patients had evidence of in-vivo damage to SP-A that resembled damage caused to SP-A when it is cleaved by neutrophil elastase. Controls showed a single band of normal dimers at 66 kDa, whereas 14 of 18 patients showed multiple bands at 66 kDa, 55 kDA, and 30-36 kDa, and six showed additional bands at 36-40 kDa. Direct damage to surfactant-specific proteins occurs in lungs of patients with ARDS, probably by proteolysis. Trials of protein-containing therapeutic surfactant are in progress in ARDS, and our results indicate that the frequent failure to maintain response may result from continuing damage to surfactant by products of activated neutrophils. A combination of surfactant and antiprotease therapy may improve therapeutic prospects.