Detailed Characterization of a Nanosecond-Lived Excited State: X-ray and Theoretical Investigation of the Quintet State in Photoexcited [Fe(terpy) 2] 2+ 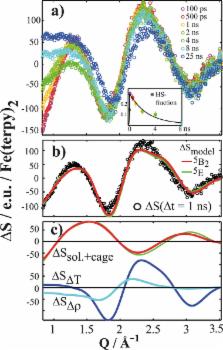 Journal: The Journal of Physical Chemistry. C, Nanomaterials and Interfaces

Theoretical predictions show that depending on the populations of the Fe 3d xy , 3d xz , and 3d yz orbitals two possible quintet states can exist for the high-spin state of the photoswitchable model system [Fe(terpy) 2] 2+. The differences in the structure and molecular properties of these 5B 2 and 5E quintets are very small and pose a substantial challenge for experiments to resolve them. Yet for a better understanding of the physics of this system, which can lead to the design of novel molecules with enhanced photoswitching performance, it is vital to determine which high-spin state is reached in the transitions that follow the light excitation. The quintet state can be prepared with a short laser pulse and can be studied with cutting-edge time-resolved X-ray techniques. Here we report on the application of an extended set of X-ray spectroscopy and scattering techniques applied to investigate the quintet state of [Fe(terpy) 2] 2+ 80 ps after light excitation. High-quality X-ray absorption, nonresonant emission, and resonant emission spectra as well as X-ray diffuse scattering data clearly reflect the formation of the high-spin state of the [Fe(terpy) 2] 2+ molecule; moreover, extended X-ray absorption fine structure spectroscopy resolves the Fe–ligand bond-length variations with unprecedented bond-length accuracy in time-resolved experiments. With ab initio calculations we determine why, in contrast to most related systems, one configurational mode is insufficient for the description of the low-spin (LS)–high-spin (HS) transition. We identify the electronic structure origin of the differences between the two possible quintet modes, and finally, we unambiguously identify the formed quintet state as 5E, in agreement with our theoretical expectations.

Quantum ESPRESSO: a modular and open-source software project for quantum simulations of materials

M Lazzeri,  P. Giannozzi,  S Baroni … (2010)
Quantum ESPRESSO is an integrated suite of computer codes for electronic-structure calculations and materials modeling, based on density-functional theory, plane waves, and pseudopotentials (norm-conserving, ultrasoft, and projector-augmented wave). Quantum ESPRESSO stands for "opEn Source Package for Research in Electronic Structure, Simulation, and Optimization". It is freely available to researchers around the world under the terms of the GNU General Public License. Quantum ESPRESSO builds upon newly-restructured electronic-structure codes that have been developed and tested by some of the original authors of novel electronic-structure algorithms and applied in the last twenty years by some of the leading materials modeling groups worldwide. Innovation and efficiency are still its main focus, with special attention paid to massively-parallel architectures, and a great effort being devoted to user friendliness. Quantum ESPRESSO is evolving towards a distribution of independent and inter-operable codes in the spirit of an open-source project, where researchers active in the field of electronic-structure calculations are encouraged to participate in the project by contributing their own codes or by implementing their own ideas into existing codes.

Francesco Aquilante,  Luca De Vico,  Nicolas FerrÃ© … (2010)
Some of the new unique features of the MOLCAS quantum chemistry package version 7 are presented in this report. In particular, the Cholesky decomposition method applied to some quantum chemical methods is described. This approach is used both in the context of a straight forward approximation of the two-electron integrals and in the generation of so-called auxiliary basis sets. The article describes how the method is implemented for most known wave functions models: self-consistent field, density functional theory, 2nd order perturbation theory, complete-active space self-consistent field multiconfigurational reference 2nd order perturbation theory, and coupled-cluster methods. The report further elaborates on the implementation of a restricted-active space self-consistent field reference function in conjunction with 2nd order perturbation theory. The average atomic natural orbital basis for relativistic calculations, covering the whole periodic table, are described and associated unique properties are demonstrated. Furthermore, the use of the arbitrary order Douglas-Kroll-Hess transformation for one-component relativistic calculations and its implementation are discussed. This section especially focuses on the implementation of the so-called picture-change-free atomic orbital property integrals. Moreover, the ElectroStatic Potential Fitted scheme, a version of a quantum mechanics/molecular mechanics hybrid method implemented in MOLCAS, is described and discussed. Finally, the report discusses the use of the MOLCAS package for advanced studies of photo chemical phenomena and the usefulness of the algorithms for constrained geometry optimization in MOLCAS in association with such studies. Copyright 2009 Wiley Periodicals, Inc.

Femtosecond XANES study of the light-induced spin crossover dynamics in an iron(II) complex.

J R Z Abela,  D. Grolimund,  R. van der Geer … (2009)
X-ray absorption spectroscopy is a powerful probe of molecular structure, but it has previously been too slow to track the earliest dynamics after photoexcitation. We investigated the ultrafast formation of the lowest quintet state of aqueous iron(II) tris(bipyridine) upon excitation of the singlet metal-to-ligand-charge-transfer (1MLCT) state by femtosecond optical pump/x-ray probe techniques based on x-ray absorption near-edge structure (XANES). By recording the intensity of a characteristic XANES feature as a function of laser pump/x-ray probe time delay, we find that the quintet state is populated in about 150 femtoseconds. The quintet state is further evidenced by its full XANES spectrum recorded at a 300-femtosecond time delay. These results resolve a long-standing issue about the population mechanism of quintet states in iron(II)-based complexes, which we identify as a simple 1MLCT-->3MLCT-->5T cascade from the initially excited state. The time scale of the 3MLCT-->5T relaxation corresponds to the period of the iron-nitrogen stretch vibration.