Predictors of Outcomes in Autism Early Intervention: Why Don’t We Know More? 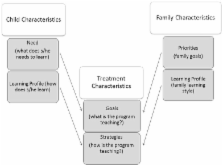 Response to early intervention programs in autism is variable. However, the factors associated with positive versus poor treatment outcomes remain unknown. Hence the issue of which intervention/s should be chosen for an individual child remains a common dilemma. We argue that lack of knowledge on “what works for whom and why” in autism reflects a number of issues in current approaches to outcomes research, and we provide recommendations to address these limitations. These include: a theory-driven selection of putative predictors; the inclusion of proximal measures that are directly relevant to the learning mechanisms demanded by the specific educational strategies; the consideration of family characteristics. Moreover, all data on associations between predictor and outcome variables should be reported in treatment studies.

Sally Rogers, Laurie Vismara (2008)
Early intervention for children with autism is currently a politically and scientifically complex topic. Randomized controlled trials have demonstrated positive effects in both short-term and longer term studies. The evidence suggests that early intervention programs are indeed beneficial for children with autism, often improving developmental functioning and decreasing maladaptive behaviors and symptom severity at the level of group analysis. Whether such changes lead to significant improvements in terms of greater independence and vocational and social functioning in adulthood is also unknown. Given the few randomized controlled treatment trials that have been carried out, the few models that have been tested, and the large differences in interventions that are being published, it is clear that the field is still very early in the process of determining (a) what kinds of interventions are most efficacious in early autism, (b) what variables moderate and mediate treatment gains and improved outcomes following intervention, and (c) the degree of both short-term and long-term improvements that can reasonably be expected. To examine these current research needs, the empirical studies of comprehensive treatments for young children with autism published since 1998 were reviewed. Lovaas's treatment meet Chambless and colleague's (Chambless et al., 1998; Chambless et al., 1996) criteria for "well-established" and no treatment meets the "probably efficacious" criteria, though three treatments meet criteria for "possibly efficacious" (Chambless & Hollon, 1998). Most studies were either Type 2 or 3 in terms of their methodological rigor based on Nathan and Gorman's (2002) criteria. Implications of these findings are also discussed in relation to practice guidelines as well as critical areas of research that have yet to be answered.

Patricia Howlin, I. Magiati, Xiang Tay (2014)
Although increasing numbers of children diagnosed with Autism Spectrum Disorders (ASD) are now entering adolescence and adulthood, there is limited research on outcomes post childhood. A systematic review of the existing literature was conducted. PsycINFO, PubMed, MedLine and CINAHL were systematically searched using keywords related to ASD and adolescent and adult outcomes. Studies of individuals diagnosed with ASD in childhood and followed up into adulthood were identified and reviewed. Only studies with samples sizes >10, mean age at outcome >16 years and at least one previous assessment in childhood (<16 years) were included. Twenty-five studies meeting criteria were identified. Reported outcomes in adulthood were highly variable across studies. Although social functioning, cognitive ability and language skills remained relatively stable in some studies, others reported deterioration over time. Adaptive functioning tended to improve in most studies. Diagnosis of autism or ASD was generally stable, although severity of autism-related behavioural symptoms was often reported to improve. Childhood IQ and early language ability appeared to be the strongest predictors of later outcome, but few studies examined other early variables associated with adult functioning. Implications of the findings are discussed in relation to methodological challenges in longitudinal outcome research and future research directions. Copyright © 2013 Elsevier Ltd. All rights reserved.

This article was submitted to Child and Neurodevelopmental Psychiatry, a section of the journal Frontiers in Pediatrics.