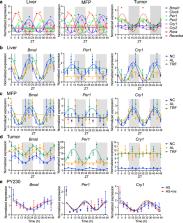 Accumulating evidence indicates that obesity with its associated metabolic dysregulation, including hyperinsulinemia and aberrant circadian rhythms, increases the risk for a variety of cancers including postmenopausal breast cancer. Caloric restriction can ameliorate the harmful metabolic effects of obesity and inhibit cancer progression but is difficult to implement and maintain outside of the clinic. In this study, we aim to test a time-restricted feeding (TRF) approach on mouse models of obesity-driven postmenopausal breast cancer. We show that TRF abrogates the obesity-enhanced mammary tumor growth in two orthotopic models in the absence of calorie restriction or weight loss. TRF also reduces breast cancer metastasis to the lung. Furthermore, TRF delays tumor initiation in a transgenic model of mammary tumorigenesis prior to the onset of obesity. Notably, TRF increases whole-body insulin sensitivity, reduces hyperinsulinemia, restores diurnal gene expression rhythms in the tumor, and attenuates tumor growth and insulin signaling. Importantly, inhibition of insulin secretion with diazoxide mimics TRF whereas artificial elevation of insulin through insulin pumps implantation reverses the effect of TRF, suggesting that TRF acts through modulating hyperinsulinemia. Our data suggest that TRF is likely to be effective in breast cancer prevention and therapy.

Obesity and its associated metabolic changes, including hyperinsulinemia and aberrant circadian rhythms, increases the risk for a variety of cancers including postmenopausal breast cancer. Here, the authors show that restricting when mice eat, but not what or how much they eat, delays breast cancer initiation and reduces tumor growth in obese mice in addition to improving insulin sensitivity and restoring circadian rhythms.

Kevin Eliceiri, Caroline Schneider, Wayne S Rasband (2016)
For the past twenty five years the NIH family of imaging software, NIH Image and ImageJ have been pioneers as open tools for scientific image analysis. We discuss the origins, challenges and solutions of these two programs, and how their history can serve to advise and inform other software projects.

Jacques Ferlay, Isabelle Soerjomataram, Rajesh Dikshit … (2015)
Estimates of the worldwide incidence and mortality from 27 major cancers and for all cancers combined for 2012 are now available in the GLOBOCAN series of the International Agency for Research on Cancer. We review the sources and methods used in compiling the national cancer incidence and mortality estimates, and briefly describe the key results by cancer site and in 20 large "areas" of the world. Overall, there were 14.1 million new cases and 8.2 million deaths in 2012. The most commonly diagnosed cancers were lung (1.82 million), breast (1.67 million), and colorectal (1.36 million); the most common causes of cancer death were lung cancer (1.6 million deaths), liver cancer (745,000 deaths), and stomach cancer (723,000 deaths). © 2014 UICC.