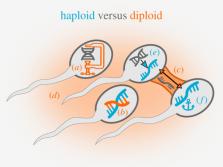 Journal: Philosophical Transactions of the Royal Society B: Biological Sciences

Sperm competition was defined by Geoff Parker 50 years ago as the competition between sperm from two or more males over the fertilization of a set of eggs. Since the publication of his seminal paper, sperm competition has developed into a large field of research, and many aspects are still being discovered. One of the relatively poorly understood aspects is the importance of selection and competition among sperm within the ejaculate of a male. The sheer number of sperm present in a male's ejaculate suggests that the competition among sibling sperm produced by the same male may be intense. In this review, we summarize Parker's theoretical models generating predictions about the evolution of sperm traits under the control of the haploid gamete as opposed to the diploid male. We review the existing evidence of within-ejaculate competition from a wide range of fields and taxa. We also discuss the conceptual and practical hurdles we have been facing to study within-ejaculate sperm competition, and how novel technologies may help in addressing some of the currently open questions.

This article is part of the theme issue ‘Fifty years of sperm competition’.

SPERM COMPETITION AND ITS EVOLUTIONARY CONSEQUENCES IN THE INSECTS

The Units of Selection

Sperm in competition: not playing by the numbers.

Rhonda Snook (2004)
The outcome of sperm competition is mediated largely by the relative numbers of sperm from competing males. However, substantial variation in features of sperm morphology and behaviour, such as length, longevity and motility, exists and researchers have suggested that this variation functions in postcopulatory sexual selection. Recent studies have determined the effect of these sperm-quality traits on fertilization success and a synthesis of this literature reveals that they are important in both sperm competition and cryptic female choice. To understand how postcopulatory sexual selection influences sperm traits, future research should determine sex-specific interactions that influence paternity, identify genetic correlations between ejaculate characters, quantify the relative costs of producing different sperm traits, and test assumptions of models of sperm quality evolution. Such research will shed light on what evolutionary pressures are responsible for the diversity in sperm morphometry and behaviour.

One contribution of 22 to a theme issue ‘ Fifty years of sperm competition’.