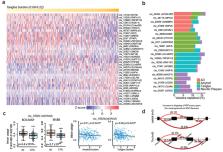 We use deep sequencing to identify sources of variation in mRNA splicing in the dorsolateral prefrontal cortex (DLFPC) of 450 subjects from two aging cohorts. Hundreds of aberrant pre-mRNA splicing events are reproducibly associated with Alzheimer’s disease. We also generate a catalog of splicing quantitative trait loci (sQTL) effects: splicing of 3,006 genes is influenced by genetic variation. We report that altered splicing is the mechanism for the effects of the PICALM, CLU, and PTK2B susceptibility alleles. Further, we performed a transcriptome-wide association study and identified 21 genes with significant associations to Alzheimer’s disease, many of which are found in known loci, but 8 are in novel loci. This highlights the convergence of old and new Alzheimer’s disease genes in autophagy-lysosomal-related pathways. Overall, this study of the aging brain’s transcriptome provides evidence that dysregulation of mRNA splicing is a feature of Alzheimer’s disease and is, in some cases, genetically driven.

Trait-Associated SNPs Are More Likely to Be eQTLs: Annotation to Enhance Discovery from GWAS

The evolutionary landscape of alternative splicing in vertebrate species.

Nuno Barbosa-Morais, Manuel Irimia, Qun Pan … (2012)
How species with similar repertoires of protein-coding genes differ so markedly at the phenotypic level is poorly understood. By comparing organ transcriptomes from vertebrate species spanning ~350 million years of evolution, we observed significant differences in alternative splicing complexity between vertebrate lineages, with the highest complexity in primates. Within 6 million years, the splicing profiles of physiologically equivalent organs diverged such that they are more strongly related to the identity of a species than they are to organ type. Most vertebrate species-specific splicing patterns are cis-directed. However, a subset of pronounced splicing changes are predicted to remodel protein interactions involving trans-acting regulators. These events likely further contributed to the diversification of splicing and other transcriptomic changes that underlie phenotypic differences among vertebrate species.

T.R. and P.L.D. conceived the project and planned the experiments. T.R. and Y.I.L. analyzed and interpreted the data with support from G.W., S.R., J.H, Y.W., I.G. B.N., and S.M. PL.D, D.A.B., M.W., P.S., E.S., V.H., and B.Z. contributed samples and/or data. T.Y.P. performed the Tau overexpression in iPSc Neurons. T.R. and P.L.D prepared the first draft of the manuscript. All authors contributed to the final manuscript.

[* ]To whom the correspondence should be addressed to: towfique.raj@ 123456mssm.edu and pld2115@ 123456cumc.columbia.edu
Corresponding authors: Correspondence to: Towfique Raj and Philip De Jager.