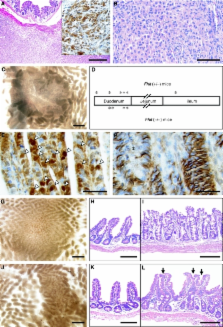 Michael P McCue,  Antje Huebner,  J P Palazzo … (1996)
A 200-300 kb region of chromosome 3p14.2, including the fragile site locus FRA3B, is homozygously deleted in multiple tumor-derived cell lines. Exon amplification from cosmids covering this deleted region allowed identification of the human FHIT gene, a member of ther histidine triad gene family, which encodes a protein with 69% similarity to an S. pombe enzyme, diadenosine 5', 5''' P1, P4-tetraphosphate asymmetrical hydrolase. The FHIT locus is composed of ten exons distributed over at least 500 kb, with three 5' untranslated exons centromeric to the renal carcinoma-associated 3p14.2 breakpoint, the remaining exons telomeric to this translocation breakpoint, and exon 5 within the homozygously deleted fragile region. Aberrant transcripts of the FHIT locus were found in approximately 50% of esophageal, stomach, and colon carcinomas.

Makoto Taketo,  H Oshima,  M. Kobayashi … (1995)
Mutations in the APC (adenomatous polyposis coli) gene appear to be responsible for not only familial adenomatous polyposis but also many sporadic cases of gastrointestinal cancers. Using homologous recombination in mouse embryonic stem cells, we constructed mice that contained a mutant gene encoding a product truncated at a 716 (Apc delta 716). Mendelian transmission of the gene caused most homozygous mice to die in utero before day 8 of gestation. The heterozygotes developed multiple polyps throughout the intestinal tract, mostly in the small intestine. The earliest polyps arose multifocally during the third week after birth, and new polyps continued to appear thereafter. Surprisingly, every nascent polyp consisted of a microadenoma covered with a layer of the normal villous epithelium. These microadenomas originated from single crypts by forming abnormal outpockets into the inner (lacteal) side of the neighboring villi. We carefully dissected such microadenomas from nascent polyps by peeling off the normal epithelium and determined their genotype by PCR: all microadenomas had already lost the wild-type Apc allele, whereas the mutant allele remained unchanged. These results indicate that loss of heterozygosity followed by formation of intravillous microadenomas is responsible for polyposis in Apc delta 716 intestinal mucosa. It is therefore unlikely that the truncated product interacts directly with the wild-type protein and causes the microadenomas by a dominant negative mechanism.

M Ottey,  Michael P McCue,  Adam L. Lock … (2000)
To investigate the role of the Fhit gene in carcinogen induction of neoplasia, we have inactivated one Fhit allele in mouse embryonic stem cells and produced (129/SvJ x C57BL/6J) F(1) mice with a Fhit allele inactivated (+/-). Fhit +/+ and +/- mice were treated intragastrically with nitrosomethylbenzylamine and observed for 10 wk posttreatment. A total of 25% of the +/+ mice developed adenoma or papilloma of the forestomach, whereas 100% of the +/- mice developed multiple tumors that were a mixture of adenomas, squamous papillomas, invasive carcinomas of the forestomach, as well as tumors of sebaceous glands. The visceral and sebaceous tumors, which lacked Fhit protein, were similar to those characteristic of Muir-Torre familial cancer syndrome.