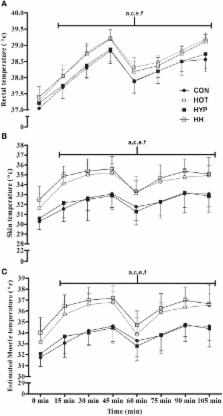 Michael N Sawka,  Scott J. Montain,  June Eichner … (2007)
This Position Stand provides guidance on fluid replacement to sustain appropriate hydration of individuals performing physical activity. The goal of prehydrating is to start the activity euhydrated and with normal plasma electrolyte levels. Prehydrating with beverages, in addition to normal meals and fluid intake, should be initiated when needed at least several hours before the activity to enable fluid absorption and allow urine output to return to normal levels. The goal of drinking during exercise is to prevent excessive (>2% body weight loss from water deficit) dehydration and excessive changes in electrolyte balance to avert compromised performance. Because there is considerable variability in sweating rates and sweat electrolyte content between individuals, customized fluid replacement programs are recommended. Individual sweat rates can be estimated by measuring body weight before and after exercise. During exercise, consuming beverages containing electrolytes and carbohydrates can provide benefits over water alone under certain circumstances. After exercise, the goal is to replace any fluid electrolyte deficit. The speed with which rehydration is needed and the magnitude of fluid electrolyte deficits will determine if an aggressive replacement program is merited.

Fatigue in soccer: a brief review.

Magni Mohr,  Peter Krustrup,  Jens Bangsbo (2005)
This review describes when fatigue may develop during soccer games and the potential physiological mechanisms that cause fatigue in soccer. According to time-motion analyses and performance measures during match-play, fatigue or reduced performance seems to occur at three different stages in the game: (1) after short-term intense periods in both halves; (2) in the initial phase of the second half; and (3) towards the end of the game. Temporary fatigue after periods of intense exercise in the game does not appear to be linked directly to muscle glycogen concentration, lactate accumulation, acidity or the breakdown of creatine phosphate. Instead, it may be related to disturbances in muscle ion homeostasis and an impaired excitation of the sarcolemma. Soccer players' ability to perform maximally is inhibited in the initial phase of the second half, which may be due to lower muscle temperatures compared with the end of the first half. Thus, when players perform low-intensity activities in the interval between the two halves, both muscle temperature and performance are preserved. Several studies have shown that fatigue sets in towards the end of a game, which may be caused by low glycogen concentrations in a considerable number of individual muscle fibres. In a hot and humid environment, dehydration and a reduced cerebral function may also contribute to the deterioration in performance. In conclusion, fatigue or impaired performance in soccer occurs during various phases in a game, and different physiological mechanisms appear to operate in different periods of a game.

This article was submitted to Exercise Physiology, a section of the journal Frontiers in Physiology