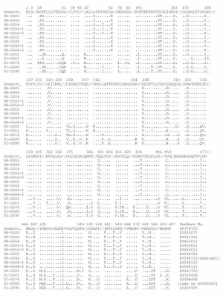 Mortality rates have differed during distemper outbreaks among free-ranging raccoons ( Procyon lotor) living around a large Chicago-area zoo, and appeared higher in year 2001 than in 1998 and 2000. We hypothesized that a more lethal variant of the local Canine distemper virus (CDV) lineage had emerged in 2001, and sought the genetic basis that led to increased virulence. However, a more complex model surfaced during preliminary analyses of CDV genomic sequences in infected tissues and of virus isolated in vitro from the raccoons.

Phylogenetic analyses of subgenomic CDV fusion ( F) -, phosphoprotein ( P) -, and complete hemagglutinin ( H) – gene sequences indicated that distinct American CDV lineages caused the distemper epizootics. The 1998 outbreak was caused by viruses that are likely from an old CDV lineage that includes CDV Snyder Hill and Lederle, which are CDV strains from the early 1950's. The 2000 and 2001 viruses appear to stem from the lineage of CDV A75/17, which was isolated in the mid 1970's. Only the 2001 viruses formed large syncytia in brain and/or lung tissue, and during primary isolation in-vitro in Vero cells, demonstrating at least one phenotypic property by which they differed from the other viruses.

Two different American CDV lineages caused the raccoon distemper outbreaks. The 1998 viruses are genetically distant to the 2000/2001 viruses. Since CDV does not cause persistent infections, the cycling of different CDV lineages within the same locale suggests multiple reintroductions of the virus to area raccoons. Our findings establish a precedent for determining whether the perceived differences in mortality rates are actual and attributable in part to inherent differences between CDV strains arising from different CDV lineages.

A ferret model of canine distemper virus virulence and immunosuppression.

Roberto Cattaneo,  Christoph Springfeld,  Veronika von Messling … (2003)
Canine distemper virus (CDV) infects many carnivores, including ferrets and dogs, and is the member of the Morbillivirus genus most easily amenable to experimentation in a homologous small-animal system. To gain insights into the determinants of CDV pathogenesis, we isolated a strain highly virulent for ferrets by repeated passaging in these animals. Sequence comparison of the genome of this strain with that of its highly attenuated precursor revealed 19 mutations distributed almost evenly in the six genes. We then recovered a virus from a cDNA copy of the virulent CDV strain's consensus sequence by using a modified reverse genetics system based on B cells. We infected ferrets with this virus and showed that it fully retained virulence as measured by the timing of rash appearance, disease onset, and death. Body temperature, leukocyte number, lymphocyte proliferation activity, and cell-associated viremia also had similar kinetics. We then addressed the question of the relative importance of the envelope and other viral constituents for virulence. Viruses in which the envelope genes (matrix, fusion, and hemagglutinin) of the virulent strain were combined with the other genes of the attenuated strain caused severe rash and fever even if the disease onset was delayed. Viruses in which the nucleocapsid, polymerase, and phosphoprotein genes (coding also for the V and C proteins) of the virulent strain were combined with the envelope genes of the attenuated strain caused milder signs of disease. Thus, virulence-inducing mutations have accumulated throughout the genome.

L V Mamaev,  Monique Visser,  Jerica M Berge … (1993)
The morbilliviruses recently isolated from two cetacean species in the North and Mediterranean Seas have been shown to differ from phocine distemper virus isolated from European seals using monoclonal antibodies. We have identified a "universal" morbillivirus primer set, based on highly conserved regions of the morbillivirus phosphoprotein (P) gene and used this to amplify a region surrounding the RNA editing site from all known members of the group. Sequence analysis of this region of the gene shows that the dolphin and porpoise viruses are related but quite different from all other members of the group, forming a distinct lineage more closely related to the ruminant morbilliviruses than to the carnivore viruses.

M Nei (1995)
Recent developments of statistical methods in molecular phylogenetics are reviewed. It is shown that the mathematical foundations of these methods are not well established, but computer simulations and empirical data indicate that currently used methods such as neighbor joining, minimum evolution, likelihood, and parsimony methods produce reasonably good phylogenetic trees when a sufficiently large number of nucleotides or amino acids are used. However, when the rate of evolution varies extensively from branch to branch, many methods may fail to recover the true topology. Solid statistical tests for examining the accuracy of trees obtained by neighbor joining, minimum evolution, and least-squares method are available, but the methods for likelihood and parsimony trees are yet to be refined. Parsimony, likelihood, and distance methods can all be used for inferring amino acid sequences of the proteins of ancestral organisms that have become extinct.

This is an open-access article distributed under the terms of the Creative Commons Attribution License ( http://creativecommons.org/licenses/by/2.0), which permits unrestricted use, distribution, and reproduction in any medium, provided the original work is properly cited.