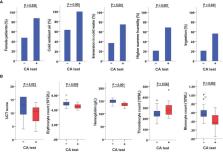 The EAACI/GA²LEN/EDF/WAO Guideline for the Definition, Classification, Diagnosis and Management of Urticaria. The 2017 Revision and Update

T Zuberbier, W. Aberer, R Asero … (2018)
This evidence- and consensus-based guideline was developed following the methods recommended by Cochrane and the Grading of Recommendations Assessment, Development and Evaluation (GRADE) working group. The conference was held on 1 December 2016. It is a joint initiative of the Dermatology Section of the European Academy of Allergology and Clinical Immunology (EAACI), the EU-founded network of excellence, the Global Allergy and Asthma European Network (GA²LEN), the European Dermatology Forum (EDF) and the World Allergy Organization (WAO) with the participation of 48 delegates of 42 national and international societies. This guideline was acknowledged and accepted by the European Union of Medical Specialists (UEMS). Urticaria is a frequent, mast cell-driven disease, presenting with wheals, angioedema, or both. The lifetime prevalence for acute urticaria is approximately 20%. Chronic spontaneous urticaria and other chronic forms of urticaria are disabling, impair quality of life and affect performance at work and school. This guideline covers the definition and classification of urticaria, taking into account the recent progress in identifying its causes, eliciting factors and pathomechanisms. In addition, it outlines evidence-based diagnostic and therapeutic approaches for the different subtypes of urticaria.

Development and validation of the Urticaria Control Test: a patient-reported outcome instrument for assessing urticaria control.

Karsten Weller, Adriane Groffik, Martin Church … (2014)
Chronic urticaria is a frequent and debilitating skin disease. Its symptoms commonly fluctuate considerably from day to day. As of yet, the only reliable tool to assess disease activity is the Urticaria Activity Score, which prospectively documents the signs and symptoms of urticaria for several days. We sought to develop and validate a novel patient-reported outcome instrument to retrospectively assess urticaria control, the Urticaria Control Test (UCT). Potential UCT items were developed by using established methods (literature research and expert and patient involvement). Subsequently, item reduction was performed by using a combined approach, applying impact and regression analysis. The resulting UCT instrument was then tested for its validity, reliability, and screening accuracy. A 4-item UCT with a recall period of 4 weeks was developed based on 25 potential UCT items tested in 508 patients with chronic urticaria. A subsequent validation study with the 4-item UCT in 120 patients with chronic urticaria demonstrated that this new tool exhibits good convergent and known-groups validity, as well as excellent test-retest reliability. In addition, the screening accuracy to identify patients with urticaria with insufficiently controlled disease was found to be high. The UCT is the first valid and reliable tool to assess disease control in patients with chronic urticaria (spontaneous and inducible). Its retrospective approach and simple scoring system make it an ideal instrument for the management of patients with chronic urticaria in clinical practice. Copyright © 2014 American Academy of Allergy, Asthma & Immunology. Published by Mosby, Inc. All rights reserved.

Sabine Pereyre, Julien Goret, Cecile Bébéar (2016)
Mycoplasma pneumoniae causes community-acquired respiratory tract infections, particularly in school-aged children and young adults. These infections occur both endemically and epidemically worldwide. M. pneumoniae lacks cell wall and is subsequently resistant to beta-lactams and to all antimicrobials targeting the cell wall. This mycoplasma is intrinsically susceptible to macrolides and related antibiotics, to tetracyclines and to fluoroquinolones. Macrolides and related antibiotics are the first-line treatment of M. pneumoniae respiratory tract infections mainly because of their low MIC against the bacteria, their low toxicity and the absence of contraindication in young children. The newer macrolides are now the preferred agents with a 7-to-14 day course of oral clarithromycin or a 5-day course of oral azithromycin for treatment of community-acquired pneumonia due to M. pneumoniae, according to the different guidelines worldwide. However, macrolide resistance has been spreading for 15 years worldwide, with prevalence now ranging between 0 and 15% in Europe and the USA, approximately 30% in Israel and up to 90–100% in Asia. This resistance is associated with point mutations in the peptidyl-transferase loop of the 23S rRNA and leads to high-level resistance to macrolides. Macrolide resistance-associated mutations can be detected using several molecular methods applicable directly from respiratory specimens. Because this resistance has clinical outcomes such as longer duration of fever, cough and hospital stay, alternative antibiotic treatment can be required, including tetracyclines such as doxycycline and minocycline or fluoroquinolones, primarily levofloxacin, during 7–14 days, even though fluoroquinolones and tetracyclines are contraindicated in all children and in children < 8 year-old, respectively. Acquired resistance to tetracyclines and fluoroquinolones has never been reported in M. pneumoniae clinical isolates but reduced susceptibility was reported in in vitro selected mutants. This article focuses on M. pneumoniae antibiotic susceptibility and on the development and the evolution of acquired resistance. Molecular detection of resistant mutants and therapeutic options in case of macrolide resistance will also be assessed.

This article was submitted to Immunological Tolerance and Regulation, a section of the journal Frontiers in Immunology