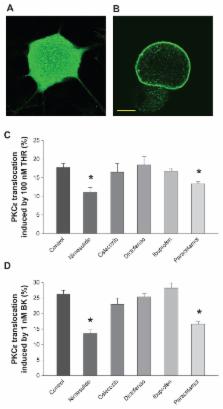 Celecoxib, diclofenac, ibuprofen, and nimesulide are nonsteroidal anti-inflammatory drugs (NSAIDs) very commonly used for the treatment of moderate to mild pain, together with paracetamol (acetaminophen), a very widely used analgesic with a lesser anti-inflammatory effect. In the study reported here, we tested the efficacy of celecoxib, diclofenac, and ibuprofen on preprotachykinin mRNA synthesis, substance P (SP) release, prostaglandin E 2 (PGE 2) release, and protein kinase C epsilon (PKCɛ) translocation in rat cultured sensory neurons from dorsal root ganglia (DRGs). The efficacy of these NSAIDs was compared with the efficacy of paracetamol and nimesulide in in vitro models of hyperalgesia (investigated previously). While nimesulide and paracetamol, as in previous experiments, decreased the percentage of cultured DRG neurons showing translocation of PKCɛ caused by 100 nM thrombin or 1 μM bradykinin in a dose-dependent manner, the other NSAIDs tested did not have a significant effect. The amount of SP released by peptidergic neurons and the expression level of preprotachykinin mRNA were assessed in basal conditions and after 70 minutes or 36 hours of stimulation with an inflammatory soup (IS) containing potassium chloride, thrombin, bradykinin, and endothelin-1. The release of SP at 70 minutes was inhibited only by nimesulide, while celecoxib and diclofenac were effective at 36 hours. The mRNA basal level of the SP precursor preprotachykinin expressed in DRG neurons was reduced only by nimesulide, while the increased levels expressed during treatment with the IS were significantly reduced by all drugs tested, with the exception of ibuprofen. All drugs were able to decrease basal and IS-stimulated PGE 2 release. Our study demonstrates novel mechanisms of action of commonly used NSAIDS.

Erica Warner,  J R Vane,  A Bukasa … (1999)
The beneficial actions of nonsteroid anti-inflammatory drugs (NSAID) can be associated with inhibition of cyclo-oxygenase (COX)-2 whereas their harmful side effects are associated with inhibition of COX-1. Here we report data from two related assay systems, the human whole blood assay and a modified human whole blood assay (using human A549 cells as a source of COX-2). This assay we refer to as the William Harvey Modified Assay. Our aim was to make meaningful comparisons of both classical NSAIDs and newer COX-2-selective compounds. These comparisons of the actions of >40 NSAIDs and novel COX-2-selective agents, including celecoxib, rofecoxib and diisopropyl fluorophosphate, demonstrate a distribution of compound selectivities toward COX-1 that aligns with the risk of serious gastrointestinal complications. In conclusion, this full in vitro analysis of COX-1/2 selectivities in human tissues clearly supports the theory that inhibition of COX-1 underlies the gastrointestinal toxicity of NSAIDs in man.

Eric C. Woolf,  B Safieh-Garabedian,  A Allchorne … (1997)
1. Peripheral inflammation is characterized by heightened pain sensitivity. This hyperalgesia is the consequence of the release of inflammatory mediators, cytokines and growth factors. A key participant is the induction of the neurotrophin nerve growth factor (NGF) by interleukin-1 beta (IL-1 beta). 2. Tumour necrosis factor alpha (TNF alpha) has been shown both to produce hyperalgesia and to upregulate IL-1 beta. We have now examined whether the induction of TNF alpha in inflammatory lesions contributes to inflammatory sensory hypersensitivity by inducing IL-1 beta and NGF. 3. The intraplantar injection of complete Freund's adjuvant (CFA) in adult rats produced a localized inflammation of the hindpaw with a rapid (3 h) reduction in withdrawal time in the hot plate test and in the mechanical threshold for eliciting the flexion withdrawal reflex. 4. The CFA-induced inflammation resulted in significant elevation in the levels of TNF alpha, IL-1 beta and NGF in the inflamed paw. In the case of TNF alpha, an elevation was detected at 3 h, rose substantially at 6 h, peaked at 24 h and remained elevated at 5 days, with similar but smaller changes in the contralateral non-inflamed hindpaw. No increase in serum TNF alpha was detected at 24 h post CFA injection. 5. Intraplantar recombinant murine TNF alpha injections produce a short-lived (3-6 h) dose-dependent (50-500 ng) increase in thermal and mechanical sensitivity which was significantly attenuated by prior administration of anti-NGF antiserum. 6. Intraplantar TNF alpha (100-500 ng) also elevated at 6 but not 48 h the levels of IL-1 beta and NGF in the hindpaw. 7. A single injection of anti-TNF alpha antiserum, 1 h before the CFA, at a dose sufficient to reduce the effects of a 100 ng intraplantar injection of TNF alpha, significantly delayed the onset of the resultant inflammatory hyperalgesia and reduced IL-1 beta but not NGF levels measured at 24 h. 8. The elevation of TNF alpha in inflammation, by virtue of its capacity to induce IL-1 beta and NGF, may contribute to the initiation of inflammatory hyperalgesia.

A cascade of cytokines mediates mechanical inflammatory hypernociception in mice.