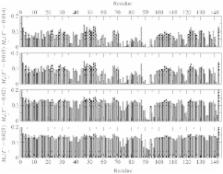 Histone proteins are not only important due to their vital role in cellular processes such as DNA compaction, replication and repair but also show intriguing structural properties that might be exploited for bioengineering purposes such as the development of nano-materials. Based on their biological and technological implications, it is interesting to investigate the structural properties of proteins as a function of temperature. In this work, we study the spatial response dynamics of the histone H2AX, consisting of 143 residues, by a coarse-grained bond fluctuating model for a broad range of normalized temperatures. A knowledge-based interaction matrix is used as input for the residue-residue Lennard-Jones potential.

), as well as universal SAW conformations at high normalized temperature (

). The radius of gyration of the protein exhibits a non-monotonic temperature dependence with a maximum at a characteristic temperature (

) where a crossover occurs from a positive (stretching at

) to negative (contraction at

A critical role for histone H2AX in recruitment of repair factors to nuclear foci after DNA damage.

T T Paull,  E P Rogakou,  V Yamazaki … (2015)
The response of eukaryotic cells to double-strand breaks in genomic DNA includes the sequestration of many factors into nuclear foci. Recently it has been reported that a member of the histone H2A family, H2AX, becomes extensively phosphorylated within 1-3 minutes of DNA damage and forms foci at break sites. In this work, we examine the role of H2AX phosphorylation in focus formation by several repair-related complexes, and investigate what factors may be involved in initiating this response. Using two different methods to create DNA double-strand breaks in human cells, we found that the repair factors Rad50 and Rad51 each colocalized with phosphorylated H2AX (gamma-H2AX) foci after DNA damage. The product of the tumor suppressor gene BRCA1 also colocalized with gamma-H2AX and was recruited to these sites before Rad50 or Rad51. Exposure of cells to the fungal inhibitor wortmannin eliminated focus formation by all repair factors examined, suggesting a role for the phosphoinositide (PI)-3 family of protein kinases in mediating this response. Wortmannin treatment was effective only when it was added early enough to prevent gamma-H2AX formation, indicating that gamma-H2AX is necessary for the recruitment of other factors to the sites of DNA damage. DNA repair-deficient cells exhibit a substantially reduced ability to increase the phosphorylation of H2AX in response to ionizing radiation, consistent with a role for gamma-H2AX in DNA repair. The pattern of gamma-H2AX foci that is established within a few minutes of DNA damage accounts for the patterns of Rad50, Rad51, and Brca1 foci seen much later during recovery from damage. The evidence presented strongly supports a role for the gamma-H2AX and the PI-3 protein kinase family in focus formation at sites of double-strand breaks and suggests the possibility of a change in chromatin structure accompanying double-strand break repair.

Sergei Izvekov,  Gregory Voth (2005)
A new approach is presented for obtaining coarse-grained (CG) force fields from fully atomistic molecular dynamics (MD) trajectories. The method is demonstrated by applying it to derive a CG model for the dimyristoylphosphatidylcholine (DMPC) lipid bilayer. The coarse-graining of the interparticle force field is accomplished by an application of a force-matching procedure to the force data obtained from an explicit atomistic MD simulation of the biomolecular system of interest. Hence, the method is termed a "multiscale" CG (MS-CG) approach in which explicit atomistic-level forces are propagated upward in scale to the coarse-grained level. The CG sites in the lipid bilayer application were associated with the centers-of-mass of atomic groups because of the simplicity in the evaluation of the forces acting on them from the atomistic data. The resulting CG lipid bilayer model is shown to accurately reproduce the structural properties of the phospholipid bilayer.

Residue-residue potentials with a favorable contact pair term and an unfavorable high packing density term, for simulation and threading.

S Miyazawa,  Terry Jernigan (1996)
Attractive inter-residue contact energies for proteins have been re-evaluated with the same assumptions and approximations used originally by us in 1985, but with a significantly larger set of protein crystal structures. An additional repulsive packing energy term, operative at higher densities to prevent overpacking, has also been estimated for all 20 amino acids as a function of the number of contacting residues, based on their observed distributions. The two terms of opposite sign are intended to be used together to provide an estimate of the overall energies of inter-residue interactions in simplified proteins without atomic details. To overcome the problem of how to utilize the many homologous proteins in the Protein Data Bank, a new scheme has been devised to assign different weights to each protein, based on similarities among amino acid sequences. A total of 1168 protein structures containing 1661 subunit sequences are actually used here. After the sequence weights have been applied, these correspond to an effective number of residue-residue contacts of 113,914, or about six times more than were used in the old analysis. Remarkably, the new attractive contact energies are nearly identical to the old ones, except for those with Leu and the rarer amino acids Trp and Met. The largest change found for Leu is surprising. The estimates of hydrophobicity from the contact energies for non-polar side-chains agree well with the experimental values. In an application of these contact energies, the sequences of 88 structurally distinct proteins in the Protein Data Bank are threaded at all possible positions without gaps into 189 different folds of proteins whose sequences differ from each other by at least 35% sequence identity. The native structures for 73 of 88 proteins, excluding 15 exceptional proteins such as membrane proteins, are all demonstrated to have the lowest alignment energies.

Publisher ID: PONE-D-11-16740
DOI: 10.1371/journal.pone.0032075
PMC ID: 3307718
PubMed ID: 22442661
Copyright statement: Fritsche et al. This is an open-access article distributed under the terms of the Creative Commons Attribution License, which permits unrestricted use, distribution, and reproduction in any medium, provided the original author and source are credited.