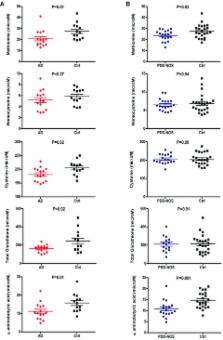 Autism spectrum disorders (ASDs), which include the prototypic autistic disorder (AD), Asperger’s syndrome (AS) and pervasive developmental disorders not otherwise specified (PDD-NOS), are complex neurodevelopmental conditions of unknown aetiology. The current study investigated the metabolites in the methionine cycle, the transsulphuration pathway, folate, vitamin B 12 and the C677T polymorphism of the MTHFR gene in three groups of children diagnosed with AD ( n= 15), AS ( n= 5) and PDD-NOS ( n= 19) and their age- and sex-matched controls ( n= 25). No metabolic disturbances were seen in the AS patients, while in the AD and PDD-NOS groups, lower plasma levels of methionine ( P= 0.01 and P= 0.03, respectively) and α-aminobutyrate were observed ( P= 0.01 and P= 0.001, respectively). Only in the AD group, plasma cysteine ( P= 0.02) and total blood glutathione ( P= 0.02) were found to be reduced. Although there was a trend towards lower levels of serine, glycine, N, N-dimethylglycine in AD patients, the plasma levels of these metabolites as well as the levels of homocysteine and cystathionine were not statistically different in any of the ASDs groups. The serum levels of vitamin B 12 and folate were in the normal range. The results of the MTHFR gene analysis showed a normal distribution of the C677T polymorphism in children with ASDs, but the frequency of the 677T allele was slightly more prevalent in AD patients. Our study indicates a possible role for the alterations in one carbon metabolism in the pathophysiology of ASDs and provides, for the first time, preliminary evidence for metabolic and genetic differences between clinical subtypes of ASDs.

Pat Levitt,  Daniel Geschwind (2007)
Autism is a common and heterogeneous childhood neurodevelopmental disorder. Analogous to broad syndromes such as mental retardation, autism has many etiologies and should be considered not as a single disorder but, rather, as 'the autisms'. However, recent genetic findings, coupled with emerging anatomical and functional imaging studies, suggest a potential unifying model in which higher-order association areas of the brain that normally connect to the frontal lobe are partially disconnected during development. This concept of developmental disconnection can accommodate the specific neurobehavioral features that are observed in autism, their emergence during development, and the heterogeneity of autism etiology, behaviors and cognition.

S. Jill James,  Paul Cutler,  Stepan Melnyk … (2004)
Autism is a complex neurodevelopmental disorder that usually presents in early childhood and that is thought to be influenced by genetic and environmental factors. Although abnormal metabolism of methionine and homocysteine has been associated with other neurologic diseases, these pathways have not been evaluated in persons with autism. The purpose of this study was to evaluate plasma concentrations of metabolites in the methionine transmethylation and transsulfuration pathways in children diagnosed with autism. Plasma concentrations of methionine, S-adenosylmethionine (SAM), S-adenosylhomocysteine (SAH), adenosine, homocysteine, cystathionine, cysteine, and oxidized and reduced glutathione were measured in 20 children with autism and in 33 control children. On the basis of the abnormal metabolic profile, a targeted nutritional intervention trial with folinic acid, betaine, and methylcobalamin was initiated in a subset of the autistic children. Relative to the control children, the children with autism had significantly lower baseline plasma concentrations of methionine, SAM, homocysteine, cystathionine, cysteine, and total glutathione and significantly higher concentrations of SAH, adenosine, and oxidized glutathione. This metabolic profile is consistent with impaired capacity for methylation (significantly lower ratio of SAM to SAH) and increased oxidative stress (significantly lower redox ratio of reduced glutathione to oxidized glutathione) in children with autism. The intervention trial was effective in normalizing the metabolic imbalance in the autistic children. An increased vulnerability to oxidative stress and a decreased capacity for methylation may contribute to the development and clinical manifestation of autism.

Metabolic endophenotype and related genotypes are associated with oxidative stress in children with autism.

Kenneth Bock,  Stepan Melnyk,  Marvin Boris … (2006)
Autism is a behaviorally defined neurodevelopmental disorder usually diagnosed in early childhood that is characterized by impairment in reciprocal communication and speech, repetitive behaviors, and social withdrawal. Although both genetic and environmental factors are thought to be involved, none have been reproducibly identified. The metabolic phenotype of an individual reflects the influence of endogenous and exogenous factors on genotype. As such, it provides a window through which the interactive impact of genes and environment may be viewed and relevant susceptibility factors identified. Although abnormal methionine metabolism has been associated with other neurologic disorders, these pathways and related polymorphisms have not been evaluated in autistic children. Plasma levels of metabolites in methionine transmethylation and transsulfuration pathways were measured in 80 autistic and 73 control children. In addition, common polymorphic variants known to modulate these metabolic pathways were evaluated in 360 autistic children and 205 controls. The metabolic results indicated that plasma methionine and the ratio of S-adenosylmethionine (SAM) to S-adenosylhomocysteine (SAH), an indicator of methylation capacity, were significantly decreased in the autistic children relative to age-matched controls. In addition, plasma levels of cysteine, glutathione, and the ratio of reduced to oxidized glutathione, an indication of antioxidant capacity and redox homeostasis, were significantly decreased. Differences in allele frequency and/or significant gene-gene interactions were found for relevant genes encoding the reduced folate carrier (RFC 80G > A), transcobalamin II (TCN2 776G > C), catechol-O-methyltransferase (COMT 472G > A), methylenetetrahydrofolate reductase (MTHFR 677C > T and 1298A > C), and glutathione-S-transferase (GST M1). We propose that an increased vulnerability to oxidative stress (endogenous or environmental) may contribute to the development and clinical manifestations of autism. (c) 2006 Wiley-Liss, Inc.