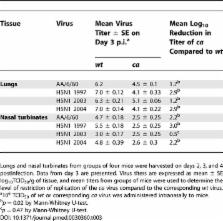 Recent outbreaks of highly pathogenic influenza A H5N1 viruses in humans and avian species that began in Asia and have spread to other continents underscore an urgent need to develop vaccines that would protect the human population in the event of a pandemic.

Live, attenuated candidate vaccines possessing genes encoding a modified H5 hemagglutinin (HA) and a wild-type (wt) N1 neuraminidase from influenza A H5N1 viruses isolated in Hong Kong and Vietnam in 1997, 2003, and 2004, and remaining gene segments derived from the cold-adapted (ca) influenza A vaccine donor strain, influenza A/Ann Arbor/6/60 ca (H2N2), were generated by reverse genetics. The H5N1 ca vaccine viruses required trypsin for efficient growth in vitro, as predicted by the modification engineered in the gene encoding the HA, and possessed the temperature-sensitive and attenuation phenotypes specified by the internal protein genes of the ca vaccine donor strain. More importantly, the candidate vaccines were immunogenic in mice. Four weeks after receiving a single dose of 10 6 50% tissue culture infectious doses of intranasally administered vaccines, mice were fully protected from lethality following challenge with homologous and antigenically distinct heterologous wt H5N1 viruses from different genetic sublineages (clades 1, 2, and 3) that were isolated in Asia between 1997 and 2005. Four weeks after receiving two doses of the vaccines, mice and ferrets were fully protected against pulmonary replication of homologous and heterologous wt H5N1 viruses.

The promising findings in these preclinical studies of safety, immunogenicity, and efficacy of the H5N1 ca vaccines against antigenically diverse H5N1 vaccines provide support for their careful evaluation in Phase 1 clinical trials in humans.

Influenza A viruses are classified into subtypes according to two of the proteins from the virus surface, the hemagglutinin (HA) and neuraminidase (NA) proteins, each of which occurs naturally in several different versions. For example, the global epidemic (pandemic) of 1918–1919 was caused by an influenza virus containing subtype 1 hemagglutinin and subtype 1 neuraminidase (H1N1), the 1957–1958 pandemic involved an H2N2 virus, and the 1969 pandemic, H3N2. Since 1997, several serious outbreaks of H5N1 infection have occurred in poultry and in humans, raising concerns that H5N1 “bird flu” may cause the next human influenza pandemic. Although human-to-human transmission of H5N1 viruses appears limited, mortality rates in human outbreaks of the disease have been alarmingly high—approximately 50%. A protective vaccine against H5N1 influenza might not only benefit regions where transmission from poultry to humans occurs, but could conceivably avert global catastrophe in the event that H5N1 evolves such that human-to-human spread becomes more frequent.

Several approaches are in progress to develop vaccines against H5N1 viruses. To date, the products that have been tested in humans have not been very effective in producing a strong immune response. To be optimal for human use, a vaccine would have to be very safe, remain stable in storage, and provide protection against influenza caused by naturally occurring H5N1 viruses that are not precisely identical to the ones used to make the vaccine. This study was done to develop a new H5N1 vaccine and to test it in animals.

The researchers developed vaccines using three artificially constructed, weakened forms of the H5N1 influenza virus. The three vaccine viruses were constructed using flu virus proteins other than HA and NA from an artificially weakened (attenuated) strain of influenza. These were combined in laboratory-grown cells with HA and NA proteins from H5N1 viruses isolated from human cases during three different years: 2004, 2003, and 1997. They grew larger quantities of the resulting viruses in hen's eggs, and tested the vaccines in chickens, ferrets, and mice.

In tests of protection, all mice that had received any of the three vaccines survived following infection with any of the natural viruses (so-called viral challenge), while unvaccinated mice died following viral challenge. This occurred even though standard blood tests could not detect a strong immune responses following a single dose of vaccine. Challenge virus was detected in the lungs of the immunized mice, but at lower levels than in the unvaccinated mice. Mice given two doses of a vaccine showed stronger immunity on blood tests, and almost complete protection from respiratory infection following challenge. In addition, mice and ferrets that had received two doses of vaccine were protected against challenge with H5N1 strains from more recent outbreaks in Asia that differed substantially from the strains that were used for the vaccine.

This study shows that it is possible to create a live, attenuated vaccine based on a single H5N1 virus that can provide protection (in mice and ferrets, at least) against different H5N1 viruses that emerge years later. Attenuated influenza virus vaccines of this sort are unlikely to be useful to protect fowl because they do not infect or induce an immune response in chickens. However, while the safety and protection found in small animals are encouraging, it is not possible to know without human testing whether a vaccine that protects mice and ferrets will work in humans, or how this type of vaccine may compare with others being developed for use in humans against H5N1 influenza. Tests of one of the vaccines in human volunteers in carefully conducted clinical trials are currently under way.

Oseltamivir resistance during treatment of influenza A (H5N1) infection.

Huyen T. T. Phan,  J. Smith,  Svitlana V. Bach … (2005)
Influenza A (H5N1) virus with an amino acid substitution in neuraminidase conferring high-level resistance to oseltamivir was isolated from two of eight Vietnamese patients during oseltamivir treatment. Both patients died of influenza A (H5N1) virus infection, despite early initiation of treatment in one patient. Surviving patients had rapid declines in the viral load to undetectable levels during treatment. These observations suggest that resistance can emerge during the currently recommended regimen of oseltamivir therapy and may be associated with clinical deterioration and that the strategy for the treatment of influenza A (H5N1) virus infection should include additional antiviral agents. Copyright 2005 Massachusetts Medical Society.

Hang Nguyen,  Oanh T K Nguyen,  Hideo Goto … (2005)
The persistence of H5N1 avian influenza viruses in many Asian countries and their ability to cause fatal infections in humans have raised serious concerns about a global flu pandemic. Here we report the isolation of an H5N1 virus from a Vietnamese girl that is resistant to the drug oseltamivir, which is an inhibitor of the viral enzyme neuraminidase and is currently used for protection against and treatment of influenza. Further investigation is necessary to determine the prevalence of oseltamivir-resistant H5N1 viruses among patients treated with this drug.

Safety and immunogenicity of an inactivated subvirion influenza A (H5N1) vaccine.

Andrew Campbell,  John J Treanor,  Linda M. Zangwill … (2006)
Influenza A (H5N1) viruses could cause a severe worldwide epidemic, with high attack rates, large numbers of deaths and hospitalizations, and wide disruption. Effective vaccines against these viruses in humans are urgently needed. We conducted a multicenter, double-blind two-stage study involving 451 healthy adults 18 to 64 years of age who were randomly assigned in a 2:2:2:2:1 ratio to receive two intramuscular doses of a subvirion influenza A (H5N1) vaccine of 90, 45, 15, or 7.5 microg of hemagglutinin antigen or placebo. The subjects were followed for the safety analysis for 56 days. Serum samples obtained before each vaccination and again 28 days after the second vaccination were tested for H5 antibody by microneutralization and hemagglutination inhibition. Mild pain at the injection site was the most common adverse event for all doses of vaccine. The frequency of a serum antibody response was highest among subjects receiving doses of 45 microg or 90 microg. Among those who received two doses of 90 microg, neutralization antibody titers reached 1:40 or greater in 54 percent, and hemagglutination-inhibition titers reached 1:40 or greater in 58 percent. Neutralization titers of 1:40 or greater were seen in 43 percent, 22 percent, and 9 percent of the subjects receiving two doses of 45, 15, and 7.5 microg, respectively. No responses were seen in placebo recipients. A two-dose regimen of 90 mug of subvirion influenza A (H5N1) vaccine does not cause severe side effects and, in the majority of recipients, generates neutralizing antibody responses typically associated with protection against influenza. A conventional subvirion H5 influenza vaccine may be effective in preventing influenza A (H5N1) disease in humans. (ClinicalTrials.gov number, NCT00115986.). Copyright 2006 Massachusetts Medical Society.

Publisher ID: 06-PLME-RA-0318R1 Serial Item and Contribution ID: plme-03-09-28
DOI: 10.1371/journal.pmed.0030360
PMC ID: 1564176
PubMed ID: 16968127
Copyright statement: This is an open-access article distributed under the terms of the Creative Commons Public Domain declaration which stipulates that, once placed in the public domain, this work may be freely reproduced, distributed, transmitted, modified, built upon, or otherwise used by anyone for any lawful purpose.

Related article ( companion): A Step Closer to Meeting the Threat of Avian Influenza