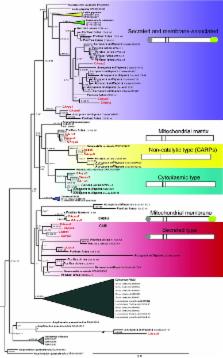 Corallimorpharians (coral-like anemones) have a close phylogenetic relationship with scleractinians (hard corals) and can potentially provide novel perspectives on the evolution of biomineralization within the anthozoan subclass Hexacorallia. A survey of the transcriptomes of three representative corallimorpharians led to the identification of homologs of some skeletal organic matrix proteins (SOMPs) previously considered to be restricted to corals.

Carbonic anhydrases (CAs), which are ubiquitous proteins involved in CO 2 trafficking, are involved in both coral calcification and photosynthesis by endosymbiotic Symbiodinium (zooxanthellae). These multiple roles are assumed to place increased demands on the CA repertoire and have presumably driven the elaboration of the complex CA repertoires typical of corals (note that “corals” are defined here as reef-building Scleractinia). Comparison of the CA inventories of corallimorpharians with those of corals reveals that corals have specifically expanded the secreted and membrane-associated type CAs, whereas similar complexity is observed in the two groups with respect to other CA types.

Comparison of the CA complement of the nonsymbiotic corallimorph Corynactis australis with that of Ricordea yuma, a corallimorph which normally hosts Symbiodinium, reveals similar numbers and distribution of CA types and suggests that an expansion of the CA repertoire has been necessary to enable calcification but may not be a requirement to enable symbiosis. Consistent with this idea, preliminary analysis suggests that the CA complexity of zooxanthellate and nonzooxanthellate sea anemones is similar.

The comparisons above suggest that although there are relatively few new genes in the skeletal organic matrix of corals (which controls the skeleton deposition process), the evolution of calcification required an expanded repertoire of secreted and membrane-associated CAs.

Chuya Shinzato,  Eiichi Shoguchi,  Takeshi Kawashima … (2011)
Despite the enormous ecological and economic importance of coral reefs, the keystone organisms in their establishment, the scleractinian corals, increasingly face a range of anthropogenic challenges including ocean acidification and seawater temperature rise. To understand better the molecular mechanisms underlying coral biology, here we decoded the approximately 420-megabase genome of Acropora digitifera using next-generation sequencing technology. This genome contains approximately 23,700 gene models. Molecular phylogenetics indicate that the coral and the sea anemone Nematostella vectensis diverged approximately 500 million years ago, considerably earlier than the time over which modern corals are represented in the fossil record (∼240 million years ago). Despite the long evolutionary history of the endosymbiosis, no evidence was found for horizontal transfer of genes from symbiont to host. However, unlike several other corals, Acropora seems to lack an enzyme essential for cysteine biosynthesis, implying dependency of this coral on its symbionts for this amino acid. Corals inhabit environments where they are frequently exposed to high levels of solar radiation, and analysis of the Acropora genome data indicates that the coral host can independently carry out de novo synthesis of mycosporine-like amino acids, which are potent ultraviolet-protective compounds. In addition, the coral innate immunity repertoire is notably more complex than that of the sea anemone, indicating that some of these genes may have roles in symbiosis or coloniality. A number of genes with putative roles in calcification were identified, and several of these are restricted to corals. The coral genome provides a platform for understanding the molecular basis of symbiosis and responses to environmental changes.

The genome of Aiptasia, a sea anemone model for coral symbiosis.

Sebastian Baumgarten,  Oleg Simakov,  Lisl Esherick … (2015)
The most diverse marine ecosystems, coral reefs, depend upon a functional symbiosis between a cnidarian animal host (the coral) and intracellular photosynthetic dinoflagellate algae. The molecular and cellular mechanisms underlying this endosymbiosis are not well understood, in part because of the difficulties of experimental work with corals. The small sea anemone Aiptasia provides a tractable laboratory model for investigating these mechanisms. Here we report on the assembly and analysis of the Aiptasia genome, which will provide a foundation for future studies and has revealed several features that may be key to understanding the evolution and function of the endosymbiosis. These features include genomic rearrangements and taxonomically restricted genes that may be functionally related to the symbiosis, aspects of host dependence on alga-derived nutrients, a novel and expanded cnidarian-specific family of putative pattern-recognition receptors that might be involved in the animal-algal interactions, and extensive lineage-specific horizontal gene transfer. Extensive integration of genes of prokaryotic origin, including genes for antimicrobial peptides, presumably reflects an intimate association of the animal-algal pair also with its prokaryotic microbiome.

Whole transcriptome analysis of the coral Acropora millepora reveals complex responses to CO₂-driven acidification during the initiation of calcification.

A. Moya,  L Huisman,  E E Ball … (2012)
The impact of ocean acidification (OA) on coral calcification, a subject of intense current interest, is poorly understood in part because of the presence of symbionts in adult corals. Early life history stages of Acropora spp. provide an opportunity to study the effects of elevated CO(2) on coral calcification without the complication of symbiont metabolism. Therefore, we used the Illumina RNAseq approach to study the effects of acute exposure to elevated CO(2) on gene expression in primary polyps of Acropora millepora, using as reference a novel comprehensive transcriptome assembly developed for this study. Gene ontology analysis of this whole transcriptome data set indicated that CO(2) -driven acidification strongly suppressed metabolism but enhanced extracellular organic matrix synthesis, whereas targeted analyses revealed complex effects on genes implicated in calcification. Unexpectedly, expression of most ion transport proteins was unaffected, while many membrane-associated or secreted carbonic anhydrases were expressed at lower levels. The most dramatic effect of CO(2) -driven acidification, however, was on genes encoding candidate and known components of the skeletal organic matrix that controls CaCO(3) deposition. The skeletal organic matrix effects included elevated expression of adult-type galaxins and some secreted acidic proteins, but down-regulation of other galaxins, secreted acidic proteins, SCRiPs and other coral-specific genes, suggesting specialized roles for the members of these protein families and complex impacts of OA on mineral deposition. This study is the first exhaustive exploration of the transcriptomic response of a scleractinian coral to acidification and provides an unbiased perspective on its effects during the early stages of calcification. © 2012 Blackwell Publishing Ltd.